In the same way Dorothy longs for Kansas, the Church longs for the New Jerusalem.
Josh Laxton 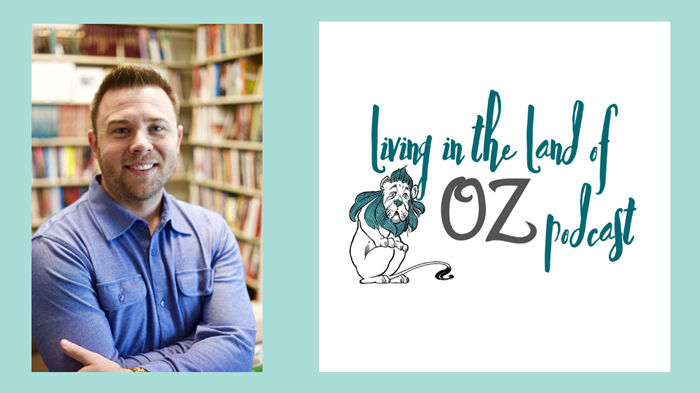 Image: Brendan Jones/Laurie Nichols
I am excited to let you all know that two of my staff—Dr. Josh Laxton, who serves as Associate Director of the Billy Graham Center, and Laurie Nichols, who serves as Director of Communications and Marketing at the Center—are launching a new BGC podcast. Called Living in the Land of Oz, we created it to help all of us navigate our culture biblically, missionally, and contextually. Josh and Laurie represent differing perspectives within the church, but both are deeply committed to showing and sharing the love of Jesus. I highly recommend adding this fun new podcast to your list of regular shows. Each week, they’ll be talking about important cultural issues and interviewing leaders who are engaging our culture well. Today, Josh is giving us a little background on himself and where the church is at. Tomorrow, Laurie will share her thoughts.

When people ask me where I’m from, I think to myself, That it’s a tricky question. Do I answer where I currently live, where I currently moved from, or where I was born? In all honesty, I think they are trying to locate the accent they hear from the words coming out of my mouth. So, I answer, “Memphis, Tennessee.”

Truthfully, I’m not from Memphis. I’m actually from Munford, Tennessee. But most people wouldn’t have a clue where Munford is located. It is a town about 30 miles north of Memphis.

Munford was a small town. Growing up, there was no McDonalds, Walmart, or BP Gas Station. Everything was mom and pop. It wasn’t until years later, after I had moved, that Munford began to commercialize. Munford was your typical small southern town—simple, conservative, religious, connected, and friendly (still to this day I tell my wife about the “index finger” wave). This was the cultural environment in which I was raised and in which I became a Christian.

At the age of 15, I sensed a call to vocational ministry and began to lay out my future plans; I planned to attend college, then seminary, and finally land at a church serving God in some capacity. Participating in several overseas mission trips as a teenager gave me a perspective of the world that was bigger than Tipton County. Thus, I never thought I would stay local.

At least my 40,000-foot plans panned out. I attended Union University, graduating with a degree in Biblical Studies. Prior to graduating, I met my wife. As newlyweds, we embarked on seminary at Southeastern Baptist Theological Seminary. Full disclosure, I was your typical Bible College, young seminarian. I was consuming so much Bible, theology, and Greek—in addition, serving in local churches—that I was overweight with pride.

But there were two practical things that happened that help shed some of that overweight pride. I was part of a church planting team in urban Atlanta and a few years later—upon completing my MDiv—I entered a PhD program in Missiology.

Remember, I’m from Munford, TN—population under 5,000. I found myself on a small church planting team in urban Atlanta where there were 5,000 people in a few blocks. No building, no budget, no people.

How in the world do you reach people—without borrowing members from other churches—with no church building, no members, and no money? Maybe I was a bad student, but from my perspective, neither college nor seminary had prepared me for this environment under these conditions.

There, I learned the precious principles of proximity and presence. It was great that college and seminary had built a theological foundation. But that theological foundation would be useless unless first, I knew the people living around me and, second, I knew how to contextualize the gospel and church in their heart language.

The second practical thing that led me to shed some of my pride weight was my PhD studies in Missiology. In that program, it occurred to me that I’m not as smart as I thought. In addition, it taught me that if the church is going to reach a changing culture, we must change our perspective and our paradigms. Both lessons require a posture of humility.

I remember reading a statement by Ed Stetzer (at the time, one of my professors, now my boss), that if the 1950s came roaring back, there would be so many churches ready to engage. That’s so true of many established churches.

But then, one of the problems with Western Christianity is that it is a copy-cat culture. We copy what we perceive is working. The church growth and seeker church movement captivated so many young leaders 20 years ago, and since then, such churches have popped up all around the U.S. to the point that they’ve saturated many of the suburban and urban markets.

Why do I say, “saturated the markets”? Because there are those like Aubrey Malphurs and Rick Richardson that accentuate, based upon research, that only a fraction (10 percent or less) of church growth is from conversion growth. In other words, the church is having a difficult time engaging an ever-changing culture with the good news of King Jesus.

I woke up to the realization that I was no longer in quaint, conservative, religious, down-to-earth Munford years ago. I had to wake up from my presuppositional stupor if I was going to be evangelistically effective.

The lessons I’ve learned over the years reminds me of the Wizard of Oz. Dorothy woke up realizing she was no longer in Kansas on Uncle Henry and Aunt Em’s farm. She was in Oz. Oz was a strange, unfamiliar land. Oz was a place of witches, lollipop guilds, lions, scarecrows, tin mans, and flying monkeys. Dorothy had to learn how to navigate Oz if she wanted to get back home.

Navigating unfamiliar, strange, and even hostile territory was something the people of God in Jeremiah 29 had to do. Could you imagine being a captive, taken from your homeland? You find yourself stunned, marginalized, uncomfortable, oppressed, and even despised.

Wondering what to do, God tells them to settle down—for they will be there 70 years! He proceeds to tell them to get back to the basics of family raising, field planting, and community building. In addition, he tells them to seek the peace and prosperity of the city of Babylon. In short, he tells them to enact Promised Land life in Babylonian captivity and to engage the Babylonians with grace and mercy. Talk about a tall order for a marginalized, oppressed people!

Also, in God’s directives, you won’t find instructions to retreat, to become sub-cultural hermits. They weren’t to sit and sulk—longing for the good ol’ days back in the Promised Land. They weren’t to become mean-spirit, violent, and intolerant. They were to navigate the new, strange, unfamiliar, even uncomfortable land with grace and grit.

Truthfully, the Western Church today is like Dorothy in Oz and the Israelites in Babylon. Foreign and unfamiliar describe their environment. In such environments, there’s a natural inclination to long for home. And that we do. But, I’m not talking about a home in which we go back to. And it’s not a home that is three-clicks-of-the-heel away. Our home is a future City—The New Jerusalem.

While we wait for home, let us as the church of the Living God, the Bride of Christ, live for the peace and prosperity of the unfamiliar, the strange, the one different than us. Doing so will require a posture of humility, a heart of grace, and a mind of understanding. And this is the essence of our podcast, Living in the Land of Oz.