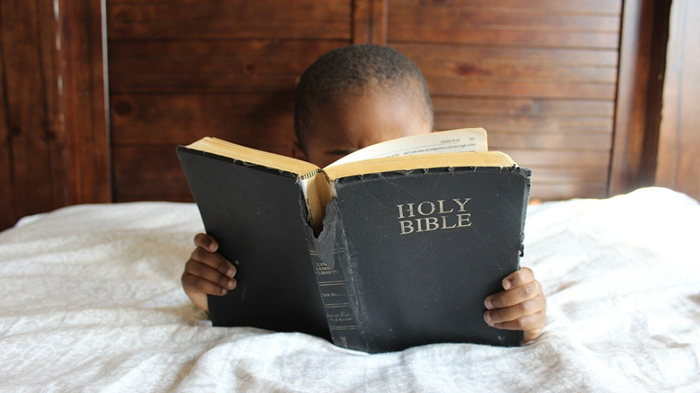 The fact that the religious unaffiliated have risen from about five percent of Americans in the mid-1970’s to nearly a quarter of the population by 2018 has all sorts of interesting impacts on what an average church looks like on Sunday morning.

Obviously, one of the most important ones to pastors and denominational leaders is: Does my church look different today than it did a few decades ago? More specifically, what does the average church goer believe about the Bible today and how has that changed over time?

It’s notoriously difficult to assess the theological worldview of an individual through a survey instrument but the General Social Survey has been asking respondents about their view of the Bible since 1984.

The question reads: Which of these statements comes closest to describing your feelings about the Bible?

The three response options are:

While we can quibble with the overall measurement validity of these options, it’s fair to say that the first option is a good proxy for an evangelical’s view of the Bible, while the middle one would seem to be more prevalent among mainline Protestants and Catholics, and the last would be chosen by those who aren’t Christians. 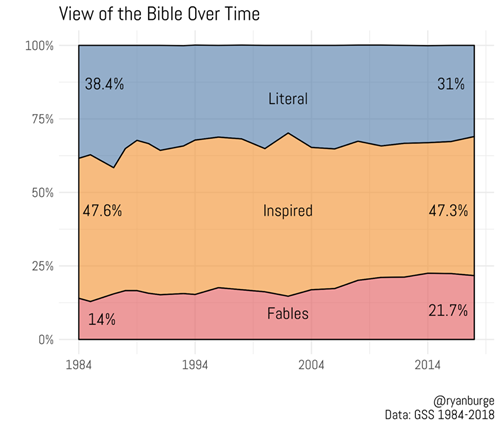 How have three views changed over time in the general public?

Well, it’s clear from the above graph that the two outside options are the ones that have seen movement. While the share of Americans who are biblical literalists has dropped by 7.4 percent, those who hold an inspired view of the Bible have stayed incredibly consistent.

On the other hand, the share of Americans who believe that the Bible is a book of fables is up nearly eight percentage points. But, these changes are likely the result of many people choosing to be religiously unaffiliated over the last thirty years. What would happen if the sample was restricted to just people who identify with a Christian tradition? 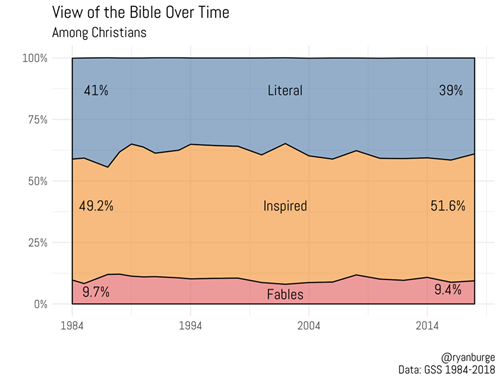 This portrait is much different.

In fact, there is no statistically significant difference between where these categories were in 1984 versus where they are in the most recent wave of the GSS in 2018. It’s interesting to note that half of all Christians hold to the middle option—the Bible is inspired by God but shouldn’t be taken literally.

But, what about the most religiously active Christians. Do weekly church goers hold to a different type of theology than Christendom as a whole? 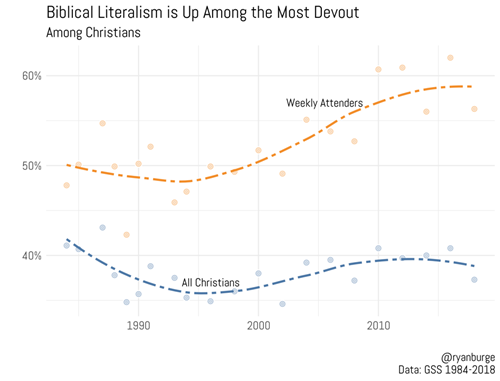 As previously noted, about 40 percent of all Christians are literalists. That’s essentially be the case with some small deviations since 1984.

However, something interesting is happening among the most religiously active. While half of them used to be biblical literalists in 1984, now that share has jumped to nearly 60%. In fact, the most religiously devout have become more theologically conservative over time.

So, what’s happening here? It’s very likely that this is due, in some part, to the decline in mainline Protestants. While they used to be 30% of the population in 1976, they are just 10% of Americans in 2018.

Many people in this tradition were not biblical literalists, but were highly active. As scores of mainline Protestants died off or become religiously unaffiliated, evangelicals have held relatively steady. We know that many of them are religiously devout and theologically conservative.

Pastors, denominational leaders, and curious Christians need to be reassured—American Christianity is not becoming more liberal.

In fact, there may be some evidence that we are becoming even slightly more theologically conservative. While millions of Americans have declared that they are religiously unaffiliated, those who remain are steadfast in their faith and in their theological convictions.

Join the conversation on Facebook
Tags:
None
Posted:
December 4, 2019