Cliff Sims, the 'Team of Vipers,' and His Views of the President's Faith Advisors (Part 2)

"Proximity to power does strange things even to pastors and ministers."
Ed Stetzer 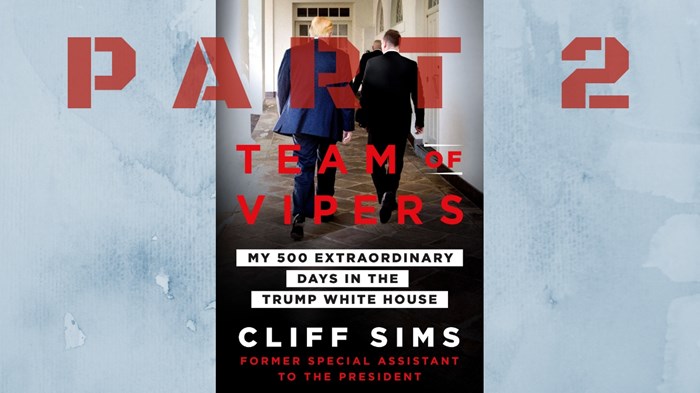 Image: Macmillian/Canva
This is the second article in a three-part series from an interview with Cliff Sims, former White House staffer and author of Team of Vipers. Click here to read part 1, to understand more about Sims and his faith background (his connection to David Platt is mentioned in part 1).

As I explained in part 1, I did several faith interviews during the 2016 campaign season. As you can see from those interviews, I did not try to repeat questions others had asked on foreign policy, etc. I asked about faith, faith leaders, and more. In the following article, I’ve done the same thing with Cliff Sims, and since he has publicly mentioned his faith, the president’s faith advisors, and the culture of faith in the White House, those were my focus.

Ed: In the Atlantic article, you were critical of the President's faith advisors. (Full disclosure, I was asked to be on that faith advisory council and declined.) From the outside, it’s hard to gauge their impact, though I have several friends in that group and they tell me they are being heard. What would you say?

Cliff: Well, first of all I think it's important to understand how these people came into Trump's orbit.

For Trump, TV is the be all and end all. So, if you're on TV, you're at the top of your field. Whether it's in business and entertainment. That’s why he had The Apprentice. Or in politics, if you were the best and the brightest reporter, you'd be on TV every day. For him, that same principle, I think, applied to the faith space.

When he sees someone like Paula White on TV, he says to himself, "These speakers must be the best. These must be the people that are at the top of their field." That's kind of how he appointed people to these positions. It wasn't like he agreed with a pastor’s doctrine or anything like that—I don't think there was much more to the decision than him seeing the individuals on TV.

There’s a story that I tell in the book that really stuck out to me very early on in the White House and made me realize that proximity to power does strange things even to pastors and ministers. When we were trying to plan the first prayer breakfast, Sarah Sanders and I were working together to organize speakers, and I wanted David Platt to come and speak at it.

I talked to David about it, and I don't think he would mind me saying that he was conflicted about that decision. I think one of the reasons for this hesitation was because when pastors get involved in the political space in a public way, there are drawbacks and it can put pastors in a position where people suddenly view them through a political lens. There's just a lot of baggage that comes along with such a decision.

But, I was talking to people inside the White House about him coming to speak and someone who interfaces with the faith advisory council inside the White House happened to mention this to Paula White. Paula came to the White House and had a meeting with them and basically trashed David and said something to the effect of, “He believes that the American dream is evil. The President's going to be really mad when he finds out that you're bringing in someone to speak at the prayer breakfast who believes that the American dream is evil.”

She was basically just undermining him and trying to stop him from being the one who was chosen to speak.

I think that was the most obvious example that I saw of the back biting that I experienced in the White House between staffers. It was really no different on the faith advisory council. Some of the individuals on the council really wanted to make sure that they were the only ones who got close to the President. They wanted to ensure that no one else came in and stole their access or spotlight away. This happened to the point that a pastor was willing to trash another pastor to keep them from having an opportunity, presumably, to preach the gospel in front of the President of the United States, his senior staff, and, frankly, the whole country. I was just really taken aback by that.

Unfortunately, I think these dynamics were a kind of social rule among the group. I don't want to paint them all with a broad brush—I think there are people with good hearts and with good intentions who are trying to be a picture of the gospel in a place that can be totally devoid of it. They deserve credit and don't deserve to be smeared. But, I did see a lot of things that made me very uncomfortable.

It’s sad to me that faith leaders were not immune to the side effects that proximity to power had on me and other people in the White House.

Ed: You had mentioned was that you hadn't seen anyone from the council press President Trump on issues around refugees and more. Johnnie Moore, one of the organizers of the faith advisory council, responded and pushed back, saying they had been heard and they have made a difference. [Editor’s note: Moore talks about his/their approach here.]

What do you think about Johnnie's response? Do you see the faith advisors making a difference?

Cliff: I do say in my book that while I was in many of these meetings and interactions that the President had with the faith advisory council, I wasn't in all of them by any means. There is a chance that some of these folks have pressed Trump on some of these issues. But in my experience, which is pretty extensive with that group, the general tone and tenor of every interaction I saw was laudatory of Trump.

And, “thank God for Donald Trump.”

And, “We've gotta do everything we can to back Donald Trump publicly.”

In a way I understand that impulse because I have had that impulse as well. Even thinking about the reason why I even joined the campaign to begin with, I know for a fact, we all do, we would not have had the Supreme Court Justices that we do right now if Hillary Clinton had been elected President.

I just never saw anyone who was willing to say, "Mr. President, thank you for these things, but we are deeply troubled by x, y, or z issue.”

I've seen a lot of faith leaders defend the President.

I have gone out and publicly defended the President and said, "In all my experience with him I have never seen anything behind closed doors that made me think that he is a racist." And I'll stand by that.

But I can also say that he has not stepped up and led on the issue of racial healing and reconciliation which I think is an important gospel message. I never saw anyone confront him on those kinds of issues.

The fact of the matter is, I know how Trump operates. I know why. It's because when you press him on things like that, you run the risk of not being invited to the next meeting or the next event on the state floor of the White House residence. There could be repercussions to confronting him about those things.

My impression was that those potential repercussions cause most members of the faith advisory council that are close to him—the ones who really interact with him—to shy away from pressing him on such topics.

Cliff Sims, the 'Team of Vipers,' and His Views of the President's Faith Advisors (Part 2)