Cliff Sims, ‘Team of Vipers,’ and Faith Inside the White House - Part 3

“It’s important to remember that the gospel matters more than politics.”
Ed Stetzer 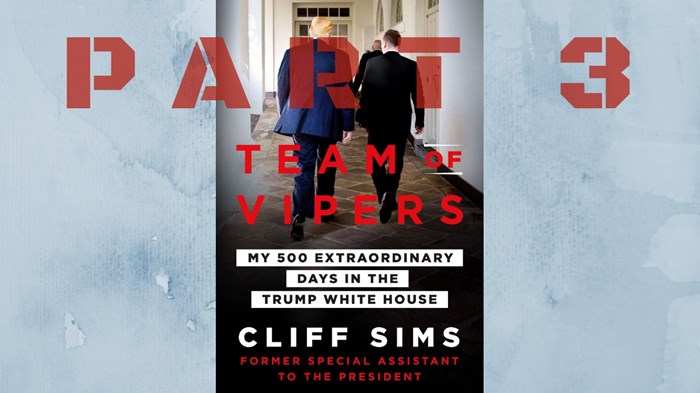 Image: Macmillan Publishers/Canva
This is the last article in a three-part series from an interview with Cliff Sims, former White House staffer and author of Team of Vipers. Here is Part 1 and Part 2 to understand more about Sims and his faith background

As I explained in part 1, I did several faith interviews during the 2016 campaign season. As you can see from those interviews, I did not try to repeat questions others had asked on foreign policy, etc. I asked about faith, faith leaders, and more. In the following article, I’ve done the same thing with Cliff Sims, and since he has publicly mentioned his faith, the president’s faith advisors, and the culture of faith in the White House, those were my focus.

Ed: You're often featured on outlets that aren’t exactly evangelical bastions and they listen to you defend the President. Would you say that you are a supporter of the President now, as a private citizen?

Cliff: I'm certainly a supporter of the overwhelming majority of the agenda that he is trying to implement. When I'm supporting him, I plan to be vocally supportive and when I think that there are areas where he could do better, I'm going to be willing to share those thoughts as well. I think going towards 2020, we're likely to have a very similar situation as 2016, with a liberal pro-abortion democrat candidate versus Donald Trump, who has governed as a pro-life conservative. When there's that A/B option, I'm going to always go with the conservative, pro-life option and that would be Trump in that case.

Ed: Is there anything else that you learned during your time in the administration that you feel could be helpful for pastors or Christian leaders?

Cliff: Sure. I think if there was anything that I was naive about going into this it was my assumption that we would be able to have a nuanced conversation about anything in the current media landscape. People have probably seen a lot of headlines about the book. I would just love for them to cut through some of that and actually read it—I think there’s a lot there to be learned.

Ed: This administration probably has more evangelicals in cabinet posts than any other administration in history. Why? Has that impacted the feel of the White House at all?

Cliff: Well, sitting on the cabinet with evangelical men and women does not necessarily translate into a changed atmosphere at the White House, because they don't work at the White House—they all work in those various agencies.

Mike Pence, of all of that crowd, is probably the only one who is at the White House every day.

Mike Pence is the real deal. I mean, I have absolutely no reason to question his faith and sincerity. In fact, the way that you know that his lifestyle is having an impact there is because Trump actually points it out. I mean, it came up in a meeting once that Vice President Pence does not go to dinner with women who aren't his wife and also doesn't drink. The President will point them out at times and it becomes evident that even though Pence isn’t walking around the West Wing proselytizing, the way he lives his life speaks for itself there.

I think Donald Trump can count votes, so he knows that the evangelical community supported him at unprecedented levels. For him, evangelicals are a political constituency and he said, and I repeated this in the book at one point, "You were with me and I'm going to be with."

From a policy perspective, I think that that has been largely correct. I don't think that there is an atmosphere of community there at the White House even among fellow believers.

Actually, one of my biggest regrets at the White House is at one point I had even thought about, "You know, what if we just did a weekly Bible study here?" It's a lot more difficult to want to mistreat your colleague when you just spent an hour studying the Bible and praying with them. I just didn't have the guts to do it.

I think that perhaps could have made a significant difference, and I just didn't do it. Truthfully, there really isn't much of a faith community or feel there at the White House.

Ed: What would you say to evangelical faith leaders about how they should engage this administration that welcomes them and gives them access to power?

Cliff: I think that's a great thing about this White House.

Several of the faith leaders said, "You know what, at least we have a seat at the table now. We didn't in the past administration." I think Trump deserves credit for that.

In my experience the best way to have a real impact is in private. This is a President who loves to see you on TV praising him and talking about how great he is. The challenge there is that if you're going to put yourself out there publicly you have to also be willing to offer feedback or just constructive criticism.

I would say that the better way is to be willing to enter into conversations with the President behind the scenes. It’s important to remember that the gospel matters more than politics. Politics can be all consuming. I get it, I've fallen for it myself. But the evangelist who leads one person to Christ on the weekend just did more than the most successful politician in the world.

That’s certainly not intended to discount the importance of policy issues for Christians, but sharing the gospel is certainly the most important thing.

Imagine the difference it would make if Donald Trump was led to Christ and encouraged about the ways that he could do a better job as the President of the United States. Even if that means losing your position in Donald Trump's orbit, it would be worth it in the end.

Ed: Does someone need to lead Donald Trump to Christ?

Cliff: Well, I don't know his heart. But the one time I've ever heard him asked if he’d asked for forgiveness for your sins—a pretty core tenet of the Christian faith—he said no. Instead, his answer was: "I just try to do better."

Even though I would defend Donald Trump against lots of malicious, unfair attacks, I have never seen fruit in his personal life that would lead me to believe that he has accepted Christ as his savior.

Cliff Sims, ‘Team of Vipers,’ and Faith Inside the White House - Part 3

Cliff Sims, ‘Team of Vipers,’ and Faith Inside the ...