Cliff Sims, 'Team of Vipers,' and Faith inside the White House - Part 1

An interview with the former White House staffer about his new book and the role faith has played in his political career.
Ed Stetzer 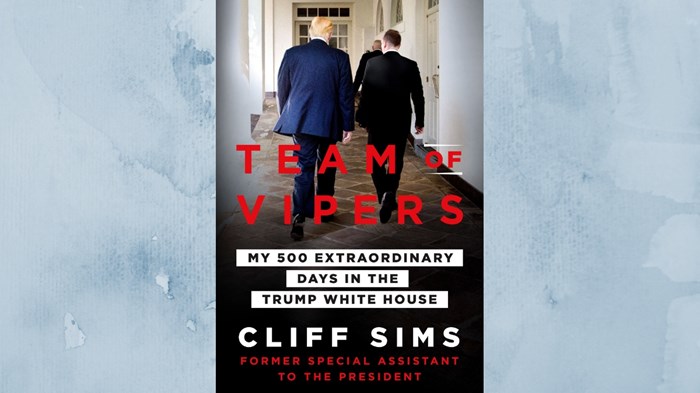 Image: Macmillan Publishers/Canva
Cliff Sims has been on a whirlwind tour. His book, Team of Vipers, has led him to interviews on The Late Show with Stephen Colbert, CNN, and much more. (That’s him next to the president on the book cover.) I watched several of these interviews, and I was particularly interested in his own faith (which he voiced on a few occasions), his comments about President Trump’s faith advisors, and his thoughts from the inside of the White House.

During the 2016 campaigning season, we reached out to every major presidential candidate and did interviews on faith and faith issues—candidates including Jeb Bush, Marco Rubio, and Ben Carson. On two occasions, we got close to an interview with then candidate Trump, but the candidate was not able to make those meetings. Hillary Clinton never replied (as Slate late explained). As you can see from those interviews, I did not try to repeat questions others had asked on foreign polity, etc. I asked about faith, faith leaders, and more. In the following article, I’ve done the same thing with Cliff Sims.

Others have looked at some of the more newsworthy exchanges (such as how “Team of Vipers” is a more disdainful play on words derived from “Team of Rivals”). But others have covered such topics and I’m more interested in the faith angle. In this multi-part series, we unpack what’s going on in the White House, but particularly in regards to faith.

Ed: Give me a brief picture of your spiritual journey.

Cliff: My dad's a Baptist minister. I grew up in a Christian home and came to Christ when I was very, very young. Our whole life centered around church, every Sunday morning, Sunday night, Wednesday night. I mean, I remember when they had Sunday night church. I don't even know if we do that anymore. I was there every time the doors were open and then pretty much every day in between because my dad worked there. One of my earliest childhood memories is on Sunday afternoons setting up a makeshift podium in our living room and mimicking my dad leading worship and preaching.

So, I had a pretty typical preacher's kid life growing up—including the teenage rebellion years.

My younger brother and his friend ended up actually starting a band at church to lead worship for kids on Wednesday nights. Because I had sung in youth choir growing up, they asked if I would be willing to sing. So I did. We started doing that and then we got this bright idea thinking to ourselves: "Well, you know what we really ought to do is just drop out of school and do this for a living." And so we did.

The next five years we toured all over the country playing in churches and Christian festivals and a lot of mainstream venues as well. That was kind of a crazy five- or six-year ride there.

In terms of my faith journey, I think going to Birmingham and getting to the church in Brook Hills and listening to David Platt preach every week just really gave me a real picture of what it's supposed to look like when you live out the Great Commission in your day-to-day life. That included, for the first time, the decision to devote a lot of our time, money, and focus on missions including overseas missions.

I started spending that time overseas, seeing the persecuted church, working with Syrian refugees, you name it. Really, I was just immersed in that whole world when the Trump opportunity came along. I had every intention of continuing to take that kind of mindset and approach into this new mission field of politics. As you read in the book—or at least saw from some headlines—I did this to varying degrees of failure.

Ed: You talk in the book about how, as a White House staffer, you were ruthless and adopted some of the White House culture in ways you would later find uncomfortable. My guess is that adaptation to your surroundings didn't happen all in one day. What are the steps that got you there?

Cliff: Well, I think as with every action that we take, it started long before that action itself was ever on the table. It’s an impulse in our heart that later becomes a kind of physical manifestation itself. I think to your point, it was kind of a slow erosion.

You know, I was working 15 hours a day. I didn't have the time that I used to have to be in the Word or praying and really seeking out God's wisdom and direction. I think over time you don't even realize what’s happening until you have some kind of perspective, look back, and realize that things had gone too far.

I do certainly see it as a slow erosion over time.

Ed: It felt like some of the book was confessional. Is that a fair estimation? If so, why?

Somebody said, "Wait, you're supposed to be the hero of this story and you're not." That's true, I am definitely not.

I was actually inspired to do that by George Stephanopoulos’ White House memoir which is one of the few things that I read kind of going into this to get some context of what other people have done in the past.

George Stephanopoulos was a Clinton staffer. He's a self-proclaimed liberal democrat. Politically, we couldn't be any further apart, so I was predisposed to look at him in a very negative light right out of the gate.

Then I read this book and I couldn't help but like the guy because he was willing to be so transparent about his own failings while he was in the White House. That gave me, I think, an extra dose of courage to be willing to do that myself as well.

His book has stood the test of time and I'm hoping mine would be able to do the same.

Cliff Sims, 'Team of Vipers,' and Faith inside the White House - Part 1

Cliff Sims, 'Team of Vipers,' and Faith inside the ...