“If you can bring people together in safe spaces where they get to know each other as people and not as issues, you can see a lot of change.”
Ed Stetzer 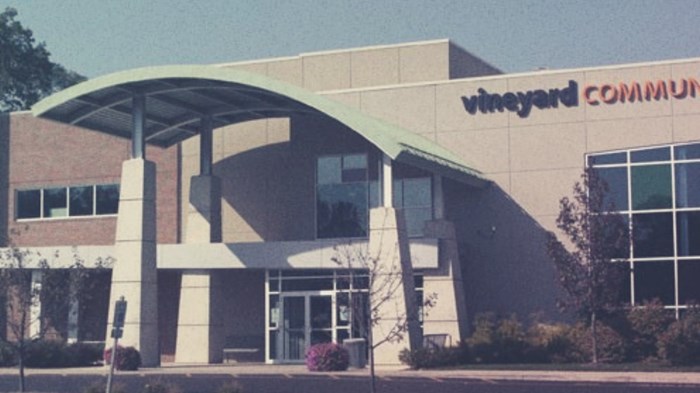 Image: Vineyard Columbus
Not too long ago I talked with Rich Nathan, senior pastor of Vineyard Columbus in Columbus, Ohio. We had a great discussion and I wanted to share it with you. I will be doing a few interviews and stories like this, looking at churches that are doing good in the name of Christ, following up on some of the themes in my new book, Christians in the Age of Outrage. Most of these interviews are conversations I did for the book, but I wanted to share more information in a full interview.

Ed: Give me an example of when Christians in your community have done good things that were surprising or that undermined the perceptions unbelievers had about who Christians are and what they do.

At a time when evangelicals are the least likely to support comprehensive immigration reform of any religious group, we've stepped in. As a result of that, we’ve been able to build relationships with the Muslim, Hispanic, and African communities here in Columbus.

We not only are doing direct legal services, but we're also helping people get citizenship, so we do citizenship classes. We have a couple hundred people coming in for English as a second language. We have an apartment that we rent out in an apartment complex that is filled with immigrants, and we do after school tutoring there as well.

Many of the folks coming in to our immigration programs are coming from the Somali community, which is a really insular community. This is their first time stepping into a church building, and they're encountering Christians. So, for the first time just this year, several Somalis have come to the Lord.

That's been the fruit of about 15 years of work. Women are wearing hijabs and walking into our community center. We're taking care of their kids in our after-school program; we have about 120 kids in the after-school program doing tutoring work, and many of the kids are Somali kids.

We very explicitly ask parents, "Is it okay if we teach them Bible?" Many of the parents say, "Yes." And so their kids are learning the Bible. The people we are able to serve are seeing Christians in a different light than media portrayal or the face of what evangelicalism has popularly been.

Ed: Your church is about half white, and then a diverse mix. But clearly, the vast majority of white evangelicals supported President Trump, who has been more anti-immigration than past presidents. How do you handle that in your congregretation?

Rich: Yeah, we've been pretty out front regarding immigration. Had we started in 2016, I think it would be really difficult to start the conversation on immigration because it's so loaded up now with security concerns, and the nativist stream in the Republican Party has really taken the party over. But we've been having the conversation about immigration for about a dozen years, since probably 2005. So that has led to a celebration of our diversity.

We still get pushback. I did a message on refugees a little over a year ago, and in the current political climate with things said about immigrants, there still is pushback. But I've written a lot. I do congregational emails.

We do an international women's breakfast every month. We do a huge international celebration every year with about 1,500 or 2,000 internationals. Diversity is a highlighted part of our church. And so if you're not comfortable with diversity, you're probably not going to stay. But we have lost some Anglo Caucasians. We certainly have. They've gone to other places.

Ed: How do you deal with the safety questions? It’s common for people to think, "Well, these Muslims are terrorists." How do you help people to see the reality that's a little different than what they've seen on TV?

Rich: Yeah, one of the things that we've done that's really been helpful is trying to bring people together in safe places, safe spaces. We really believe in the social contact theory that sociologists have worked out for decades. A lot of our fears and prejudices break down when we actually get to know people.

And when we stop arguing about issues, and when people stop being issues and they start becoming people, that changes everything. What we've done to foster that is we've brought people together in safe places.

We rent out a Muslim restaurant on a regular basis. Tuesday night, when business is slow, they're just delighted to have some group come in and say, "Hey, we want to rent the whole place." We bring Muslims together with Christians over dinner, and they just talk.

A friend of mine, who is as conservative a Republican as they come, was absolutely classically fearful about Muslims. Muslims are coming in and they're going impose Sharia law in Ohio, and all of it. But she was invited, and because her dear friend was going, she reluctantly went, met with lovely Muslim women, and they became friends. Now she regularly volunteers in that ministry.

So, social contact can be so powerful. Our community center's been a great place for safe relationships. If you can bring people together in safe spaces where they get to know each other as people and not as issues, you can see a lot of change.

And I know that was true in my own life, too. My wife Marlene and I, we moved into an inner-city neighborhood with a community of Christians around 37 years ago. It was a community that was half African American, half Appalachians. Connecting with people in that neighborhood broke down a lot of our stereotypes, a lot of our fears, and people are no longer issues.

The Appalachia family next door to us had four kids by four different men. One of their girls would hang out on our porch because she was just lost in the shuffle. She showed up at church four years later. She was 15-years-old, and she was holding out a little baby, and she goes, "Look, Marlene, I became a mama," to my wife. I almost burst into tears. I just thought, This little thing had no chance.

That, for me, was a life lesson that when we're no longer talking about the issue of teen pregnancy, but we're talking about Lisa, who just never had a chance. There's just something different that happens. So, that's what we're trying to do. We try to help people to connect with other people and in an environment that is safe. Then in that context, people talk and they meet, and they change.

Ed: What advice would you give to Christians who want to break through some of the fear and anger, and really be people living on a mission?

Rich: Part of it is that the senior pastor has to lead. I don't think that you can farm out or hand off issues, particularly on issues like diversity or immigration. I've seen that in a lot of white suburban churches. They realize, Oh, there's a call in Scripture toward breaking down dividing walls. We need to do it. Hey, you know what we're going to do? We're going to hire an African American worship leader. And part of their portfolio will be to grow that segment of the church.

No, that's not going to happen. And it's going to be a negative experience for the worship leader. It needs to come from the heart of the church and the heart of the senior pastor if they want to change the face of the church. To engage some tough issues, it's going to take pastoral involvement, but also pastoral courage, because you will get pushback. Not only are there cultural intimidators, but there are religious intimidators.

I was just reading the story of David and Goliath this morning, and David gets pushback not just from Goliath but from his own family. So, pushback's going to come from the church itself, and a pastor needs to have conviction that I'm going to do this regardless of the pushback because it’s biblical, because this is the kingdom, and we’re going to press ahead.

So, I would say to any church that really wants to take some risky steps and risky faith, that this is a matter of pastoral courage.

One-on-One with Rich Nathan on Immigration and ...