God chooses the unlikely yet obedient to be his image bearers.
Jessica Leep Fick 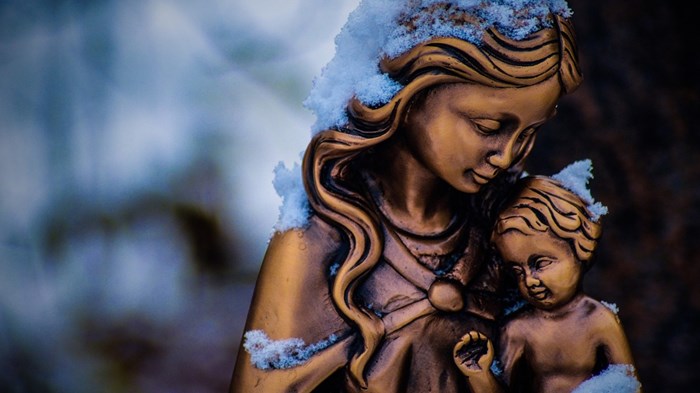 As I spent time reflecting on Mary in the Gospel of Luke this advent, I was continually brought to tears in a way that I’ve never experienced. Her story is beautiful and bold. It reminds us of the uncomfortable reality that witness is embodied and done in community.

It is sacred, messy, painful, and confusing. Yet it is God’s way of birthing gospel dreams in and through each of us.

Ben Witherington III writes in Women and the Genesis of Christianity that:

…it is Elizabeth and Mary, not Zechariah and Joseph who are first to receive the message of Christ’s coming, who are praised and blessed by God’s angels, and who are first to sing and prophesy about the Christ child…perhaps they are also the first examples of the lowly being exalted as part of God’s plan of eschatological reversal that breaks into history with, in, and through the person of Jesus.

When Gabriel appears to Mary, he doesn’t begin by telling her what will happen. He tells her why. Why? You are highly favored. Mary is troubled by his words and asks, “What kind of a greeting is this?”

He tells her again, “Don’t be afraid, you have found favor with God.”

The angel speaks these words to Mary because she is seen as anything but favored in her culture. Mary is a peasant, an unmarried girl from an insignificant village. In Jewish culture, a woman pregnant outside of marriage faced the threat of being put to death at worst and being dishonored and disgraced at best.

Women today are fighting through the barriers to share Jesus as they ask the same question Mary asked—“Why? Why am I, or would I be highly favored by God? Why would God choose to use me in his plans as a single woman who feels unseen? As a widower who is questioning her purpose in life? How am I favored when I’ve been abused by brothers in Christ that I believed I could trust?”

It’s hard to see yourself as the one favored to share the hope of Jesus when all you see is the Bible teacher or the evangelist from the stage telling their stories of preaching across the world. Think about who bears witness to your community. Who gives a testimony of faithful witness when you have conferences? Are they people who are just like you who have a similar ministry to you?

In evangelism, triumphant stories of white men preaching from stages to thousands of people will not be sufficient to unleash ordinary woman to witness. Women who are struggling to overcome depression or chronic illness, the grind of full-time work, and finding friendship in a lonely and isolating culture.

Women need to know that witness is embodied in these places. We see ourselves in the stories we’re told in our churches and Christian ministries. But you can’t be who you can’t see.

As evangelists, we can’t neglect our call to equip half the church for God’s mission. I’m thankful for women like Christine Caine, Jo Saxton, Beth Moore, Ruth Padilla-Deborst, and many other female and male theologians and Bible teachers who cast vision for women and are asking “Why? Why would God choose me to be his witness and image bearer?”

They answer with their embodied stories of being chosen by God even when they’ve experienced racism, sexual abuse, being in the foster care system, because God chooses the unlikely yet obedient to be his image bearers. Just like Mary, their stories are embodied stories of saying ‘yes’ to Jesus to follow him into mission.

Like Mary, their identity is rooted in God showing them favor, choosing them because they are loved and created for the purpose of making Jesus known. When women aren’t hearing stories in congregations or organizations of other women saying ‘yes’ to Jesus to proclaim him despite the internal and external barriers, it’s unlikely that they will see themselves as crucial to the gospel going forward.

Recently, I heard the story of Belinda, one of our Stonecroft volunteers, boldly sharing her faith with other women.

Belinda lived as a homeless drug addict, working the streets to support her habit. Without family or friends, she wanted to die. As a child, she remembered praying to Jesus, wondering, “Could Jesus love me?” She told us, “One day, I walked into a church to find out. No one spoke to me. No one would look at me. I felt invisible. I ran outside, crying.”

Years later, Belinda got sober and was invited to church where she met one of our group leaders, Sage. At their first meeting they did an icebreaker where everyone wrote down something they were thankful for. Belinda had no idea that they would be read aloud and then everyone would guess whose card it was.

Belinda had written down “sobriety.” Her heart sank, terrified of how women would respond when they realized it was her card.

Instead of awkward silence or shame Belinda found love and acceptance with the women at that meeting in her very physical reality of overcoming addiction. A few months later, she shared her story of finding community at a Storymarks outreach where women share the stories behind their tattoos.

Belinda shared the gospel through the story of her tattoo even though she was terrified to get up in front of people. That night she invited other women to begin following Jesus and discover how they are loved and favored by him no matter who they are, how society views them, or what has happened to them in the past.

Mary is not valued because of who she was married to, the town she came from, her years of ministry experience or even because she was the vessel who carried Jesus. She is favored by God and seen by God as a credible witness to birth the dream of Jesus in her own right because she loved the Lord and was obedient to do his work.

May many more women become an audacious example of witness, like Mary believing that nothing is impossible with God.

Jessica Leep Fick innovates new training and outreach tools for women to share the gospel globally as the evangelism resources director for Stonecroft Ministries. She is the author of Beautiful Feet: Unleashing Women to Everyday Witness and co-host of the Ears to Speak podcast. She lives in Kansas City with her husband and two sons where they kayak, build elaborate Lego creations, and eat delicious BBQ together.