It is important for the global church to understand that China matters for us all.
Brian C. Stiller 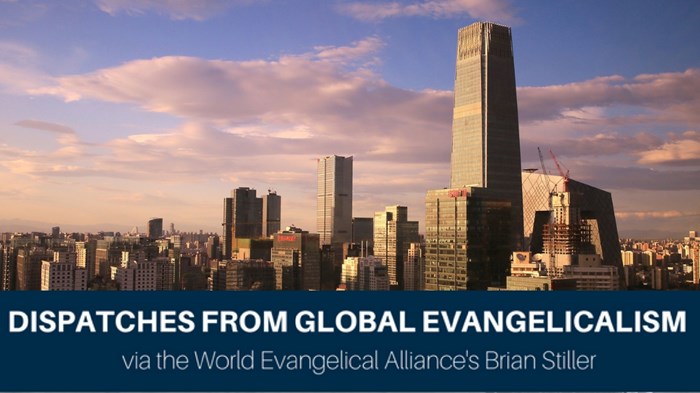 I’m frequently asked, “What is the current state of the church in China?” China is big news in the West, on many fronts. Presidents Donald Trump and Xi Jinping are nose-to-nose in a global economic poker game. Who will blink first is what pundits debate.

In the U.S. and Canada, major television networks and newspapers have focused on issues facing Christians in China. Of particular interest is the Zion “house church,” also known as an “unregistered church.” Zion, the largest unregistered church in Beijing, where I preached some months ago, was recently shut down.

Such actions lead one to wonder if the church is generally under attack by the government or if these are just one-off events. Of course, churches are always under surveillance. While visiting a number of house churches in five cities, I asked if the government knew of their activities. Mostly I’d get a smile with, “Of course, we’re in China.”

Then recently, I met with more than a dozen house church pastors. I wanted to know if the current government crackdown was simply a ripple of minor religious consequence, a wave smashing about but eventually wearing itself out on the cultural shoreline, or if this was a rising tide.

(Note: what we referred to as the “underground church” is now called “house church,” although very much above ground. House churches are not registered with the government, in contrast to the “registered churches” which, while generally evangelical, are under varying levels of influence and control by the government.)

China-watching is dangerous, even for the most informed. Snapshots too easily turn into a kind of movie, as if occasional shots give context for the wider reality. The maxim “What you’ve heard happened has probably happened one time, in one place, and to one group“ warns us not to assume that what we hear concerning a few churches is happening everywhere.

For hours I listened to pastors and their stories. They were unwavering in their caution. What matters is that these pastors are on the ground, in the actual give and take of their Chinese world. Some have been picked up for questioning, some sent to jail, and others had their churches were shut down.

Even with their personal experience, they wanted me to be sure I didn’t give the world the wrong picture. When I told them of our national newscasts telling the story of the closing of the Zion church, they agreed it was factual, but also wrong to conclude it was country-wide.

Even so, recent reports tell of the government moving in on churches and leaders in ways not seen in recent years. Members of the Early Rain Covenant Church in Chengdu were targeted. The Rongguili Church in Guangzhou, an unregistered church of some 5,000 that dates back to the Cultural Revolution and founded by Pastor Lamb, has been closed. These are a mix of realities that don’t easily lead to generalizations.

A country in speedy transition

China has rapidly moved from a primitive and pre-modern society to one of the top global powers, sophisticated and with worldwide social and economic influence. She has done in decades what takes most countries a century. China, now a superpower, will this year have the largest economy in the world.

China isn’t the only country in rapid change, but because of her size, economic and military muscle, and the stunning growth of Christian faith – and all of this under a Communist regime – it is important for the global church to understand that China matters for us all.

What, then, are the major factors in its influence on the witness of Christ, and its inevitable effect as China stretches her influence globally? I see six important elements stoking the fires of change, uncertainty and influence.

The most obvious factor is President Xi Jinping’s rise to power, and the assuming of the prime levers of power, now considered equal to Chairman Mao. The party elevated him by enshrining his ideas or “thoughts” in its constitution, an honor given only to Mao. As well, presidential term-limits were changed so he can rule beyond 2023. His power seems inviolate.

Second, Xi Jinping’s recent Belt and Road Initiative is a trillion-dollar plan affecting 68 countries and 65 percent of the world in plans for airports, seaports, railroads, highways, all part of a global infrastructure of incredible magnitude, the most grand and costly in the history of the world.

Third, the recent detaining of a million Muslims in re-education camps in west China is about controlling her boundaries and people so as to prevent uprisings. It is not a matter of religion as much as it is a cultural anxiety that groups of size can become centers of unrest, a cycle of political shifts common to China’s history.

As one academic noted, “Their government’s concern is not about freedom of religion, but freedom of assembly.” This is an issue of internal control, a fingerprint, so it seems, of the president.

Fourth, SARA, the State Administration for Religious Affairs, has been moved from answering to the governmental bureaucracy, to direct reporting to the Central Committee of the Communist Party. This means that the China Christian Council and the Three-Self Patriotic Movement will be more directly under party rule.

Fifth, one of President Xi Jinping’s major initiatives in fighting corruption has the effect of creating fear among its vast number of bureaucrats if they are offsides with the president. What this means is that falling in step with the president’s voiced plan of Sinicization – whereby all elements of Chinese life are influenced by its culture and social norms, especially that of the Han Chinese culture – is pressure from the top to conform. When officials are onside, by shoring up resistance to the growing presence of the church they may feel they are demonstrating their loyalty to the president.

What then of the church?

One pastor said, “Most urban pastors were expecting this change. However, we won’t fight, but we will go on.” Another said, “It’s a good spiritual exercise.” What wasn’t clear to them is whether the current pressure on pastors and congregations is coming from the top or from local officials.

One noted if a 200-member church disappears, local officials are still responsible to report where those people are. And if they no longer meet as before, and those in charge of keeping count can’t find them, they could be in trouble. It was their experience that generally local officials want to avoid these battles.

For these pastors, current upsets were simply a bump in road—a good learning moment for younger pastors who had never experienced this before.

What will affect the rest of the world is the Chinese church’s growing interest in missional life and witness. Keep an eye on this land and its people. Engage in prayer and assistance.

Our world will feel the presence and witness of this church, its theology and missional approach rooted in a Confucius culture, language and view of the world, even as Western missions were influenced by their home cultures.

As China builds along the many “silk” roads of her network, missionaries and evangelists will be traveling those roads, spreading into those country where their political and economic masters camp. They will plant new churches, start Bible studies, promote prayer, and provide human service, doing exactly what Paul and his colleagues did a couple millennia ago.

Rule of thumb: Keep China in your prayer book.

Brian C. Stiller is a Global Ambassador for The World Evangelical Alliance.