What Is Biblical Preaching?: The Demonstration of the Spirit’s Power in Preaching

When the Spirit moves during a sermon, what does it look like?
Samuel Rodriquez 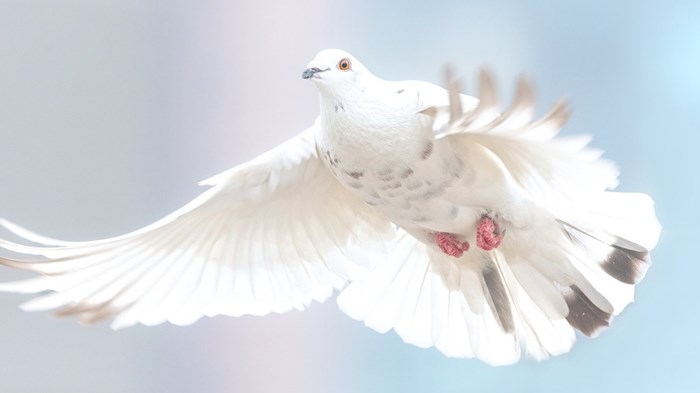 Image: via Pixabay/MK817
Today we conclude our series on biblical preaching (in partnership with The Gospel Project). We have asked some teachers, preachers, and scholars to consider preaching, interact with it, and contrast some different approaches.

The Apostle Paul made a statement that should resonate in the mind of every preacher with the courage to stand behind a pulpit and declare "thus saith the Lord" to any audience: "My message and my preaching were not with wise and persuasive words, but with a demonstration of the Spirit's power" (1. Cor. 2:4).

The question arises: Does this passage present a rubric for effective delivery of God’s word?

Like many people I grew up with, I was raised in an era that saw a revival of popularity in a TV series that originally aired before my birth. The original Star Trek is the grandaddy of all sci-fi space odysseys. Most of my friends could quote the opening lines: "Space—the final frontier. These are the voyages of … " And so on and so on.

For many, Captain Kirk was the ultimate hero. He was the model of modern leadership: handsome, wise, decisive, witty, willing to lay down his life for his crew at any given moment and of course, over the top.

My favorite character, though, was none other than Mr. Spock. Leonard Nimoy brilliantly portrayed a humanoid from an alien race who had a trait more distinctive than his pointy ears. Mr. Spock was a Vulcan, and Vulcans had evolved to be a superior people in comparison with the futuristic humans whose origin was Earth.

It did not take long to learn that this evolution had taught the Vulcans how to completely suppress emotions. Emotions were seen as the root of all evil, of all wars, of the unnecessary pursuit of romantic relationships, and other flaws that made earthly humans sub-par.

Kirk and Spock were the yin and yang, the Lone Ranger and Tonto, the Batman and Robin of space. They were diametrically opposite. Kirk was led by emotions, but he was a great leader; Spock had no emotions, yet it made him the ultimate right-hand man.

I have often been intrigued at how many people of faith—from different denominational tribes than my own—have evolved, if you will, to a faith culture that seems to suggest that true maturity brings with it a "Spock-like" approach.

Exuberant praise and worship styles, emotional singing, and any kind of rhythmic movement (otherwise known as "dancing") is fine for those who have not yet arrived at the more serene mature state of knowing God without needing the emotional response, connection, or demonstration thereof.

Notwithstanding, a preacher who uses emotion stands in obvious violation of what Paul was expressing in 1 Corinthians. Would not persuasive words obviously include the use of emotional expressions or outbursts?

I believe it is quite the contrary. The persuasive words Paul references speak more of a demonstration of intellect and learnedness and less about the use of emotion.

Tangentially, an overuse of emotionalism would definitely violate the contrast between persuasion and power found in the verse. Nevertheless, a "Spock-like" preaching style is not proof that one has arrived to a more mature preaching style, nor is it an indication that the preacher happens to have an audience who is so mature in the things of God that there is no need for emotion.

As a young preacher who grew up in the Evangelical movement, I attempted to emulate my own set of heroes in the faith. These men and women can best be described as anointed, Spirit-filled, and understood the art of moving a crowd so as to usher in the presence of God into a room for the purpose of conviction that leads to repentance.

Corresponding messages included appropriate hermeneutics, homiletics and sound exegetical extrapolation, yet all of my heroes included a conclusion that I still use to this day: a call to change.

You see, in my circle, the preacher falls short of a complete message unless there is some sort of call to respond. The “altar call” or “call to action” was—and still is, in most respects—a critical part of preaching. This can very well be a blessing, but it can also be problematic, depending on how a young man or woman matures in his or her preaching style.

For the Evangelical Spirit-empowered community, the altar call embodies two critical elements; the presence of God in the room and the ability to persuade or move people to connect with that presence for either a decision of faith or some sort of spiritual "breakthrough."

Using these elements as a metric, however, creates a precarious environment where young preachers can violate the teaching of Paul. The danger exists when the sermon can be more about the response of the audience rather than dependency on the Word of God and, subsequently, the presence of God.

By "presence of God," I am referring to the belief that the Holy Spirit is active in the room, communicating beyond what is audible to the listener, convicting hearts in ways that are unique to each person, and carefully orchestrating a moment that will become a monumental memory of a time and place where individuals meet with God.

As a result of the tendency to lead people to a place of response, which does not exclude emotions, the preacher can easily tend toward an overuse or misuse of emotional manipulation. I personally believe that preachers need mentors who can have deep discussions about balance in this area.

Recently, I watched a TED Talk spoof where the entire speech centered on the key components of a successful TED Talk. The speaker brilliantly brought together key things like voice inflection, mannerisms, volume, repetitive techniques, counting on your fingers, etc., to make the point that people can work a crowd with virtually no content at all.

Though I am sure many preachers use similar learned techniques to work a crowd, I am now more convinced than ever that some of our heroes from other movements have learned persuasive techniques that work in their own circles of influence and audiences. No one is immune to need the tender, careful art of balance when preaching the Word of God. Just because a preacher completely avoids emotion does not mean that other techniques of persuasion are not in play.

There is a place for it, sure, but for me the pulpit is a place where the preacher is connecting to the audience while being completely led by the Spirit of God. That makes me excited, and thus it makes me emotional.

Have I toned it down for certain audiences? Of course I have. I have found, though, that most audiences appreciate an emotional conviction while preaching.

The ultimate thing to avoid is pure, unadulterated manipulation. It is to be avoided by the emotional preacher and the unemotional preacher with the same vigor and intensity. As preachers, we want to convince without manipulating, and this is something that can only be attained with experience and with the aid of friends and partners in ministry whom you can be "real" with.

Again, manipulation can occur with or without an emotional style of preaching. Just because someone can persuade does not mean the Holy Spirit is active in that persuasion, vis-à-vis Paul.

We are living in times that require a presentation of the gospel accompanied by a demonstration of the Spirit's power. We may disagree about the style, we may choose the way of Spock or of Kirk, but let's stay on the Enterprise together. There is a world that needs us to boldly go, boldly preach, and boldly announce that the Kingdom of God is here, and people are invited to come, to taste, and to see. Paul declared that he did not come with persuasive words, but he came accompanied by the demonstration of the Spirit's power.

Is the human trait of emotion stimulated when the Spirit's power is demonstrated? I am convinced that it is. However, the pursuit is a connection with the Spirit, not a mere emotional experience. I have been around long enough to see exuberant worshippers fail to mature in their faith, but I refuse to connect spiritual maturity to a Vulcan-like faith journey.

I am sure that much of what I believe about emotions and preaching comes from my personal background and tribe. However, I challenge the reader to examine whether their belief that preachers should teach the Word absent of emotions is possibly more about what they have become accustomed to.

At the end of the day, Christ-centered, Bible-based, Spirit-empowered preaching that speaks to the heart (affective), head (cognitive), and hand (practical) can never fail. Perhaps God provided us with a church where we can have both—where we could truly be all things to all people so that we may convince some.

What Is Biblical Preaching?: The Demonstration of the Spirit’s Power in Preaching

What Is Biblical Preaching?: The Demonstration of ...