“One of the qualities that I believe distinguishes effective leaders is the ability to see further than others see.”
Ed Stetzer 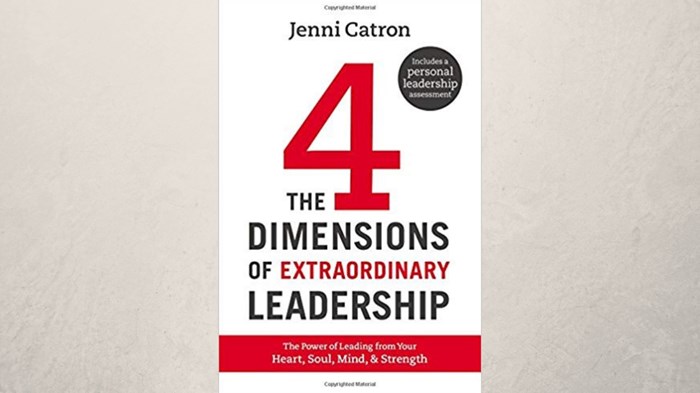 Image: Harper Collins Publishing/Canva
Recently, I invited Jenni Catron, founder of 4Sight Group, to guest lecture at our Wheaton College Graduate School. She did a Q&A about leadership in the church and about her book The Four Dimensions of Extraordinary Leadership: The Power of Leading from Your Heart. (Her book is one of the required textbooks.) If you are interested in the program, you can always email mml@wheaton.edu for more information! Here’s our interview with Jenni, slightly edited for clarity and brevity.

Ed: Jenni, you’ve led change in a lot of different settings including churches, and now your organization continues to help people with change. Tell us a little bit about how you have thought about change in general, and how you apply that in churches specifically.

Jenni: Change is a complicated component of leadership. The reality is, many leaders who enter into situations of change do so without really having the skills or coaching to know how to do it. The big thing for me in change management is rooted in the emotional intelligence of the leader. Leaders engaging in change not only need to understand themselves, but the people they’re leading.

One of the qualities that I believe distinguishes effective leaders is the ability to see further than others see. Leaders have the insight of where God is leading and what change is needed to arrive at the place of God’s prompting.

It is easy for leaders to become impatient when leading through change because they can see the destination and understand the steps needed to get there, but they forget to graciously lead people at a pace they can stand. That’s not to say that leaders shouldn’t challenge and stretch their people or prep their people for discomfort at times. But emotional intelligence is important as it gives leaders the discernment to graciously bring people along rather than grudgingly dragging them.

Ed: How do you coach people through change?

As leaders move people through this process of change, it’s important for them to pause in order to listen well to those (teammates, congregants) affected by the change. Listening to their feedback will provide leaders with an image of the kind of preferred future vision they’ll need to paint for them.

Let me sum it up this way: Build a plan, define the steps, listen well, start taking action, but then in that action, keep telling the stories of how the changes are really moving the body towards the preferred future.

Ed: What are some of the mistakes leaders make in leadership? What about in leading change?

Jenni: I think, generally, leaders lead without the awareness that most people can’t see what they see. In other words, they take for granted the fact that they can see what others simply don’t see. As a result, they tend to be too out in front in their leadership.

In addition, people don’t like change because it pushes them to a place of incompetence, or discomfort, for a season. When I heard this, the light bulb went off. I realized I’m asking them to move to a place of discomfort. I realized I’m asking them to move into something they’re not familiar with, or that they aren’t competent in. This understanding made me a more compassionate leader, which leads me to my mantra of “patient and persistent.”

Ed: You’ve served on staff at a couple of large churches—Cross Point in Nashville and Menlo Church in California—and now you’re doing consulting, speaking, and writing. Any differences between leading large and small churches?

Jenni: The short answer, yes…there are differences. However, when you trace many of the differences back to the root, you’ll find that there are a lot of similarities. Larger churches have the same problems as smaller churches, they are just on a bigger scale.

But there are differences, too. I believe that in larger church contexts leaders have to be more gifted at developing other leaders—injecting the vision and cultural DNA within them—and releasing people to do ministry. It seems that in smaller church contexts, there’s just a handful of leaders doing all the work and thus managing the ministry. The challenge for smaller ministries is the ability to cast vision and trust that somebody else will be able to carry it out.

In all honesty, however, this can be true for larger churches. I remember years ago when I was at Cross Point, I realized I was the bottleneck to our staff. I had a few of the leaders bravely speak into my leadership. They told me that I needed to give them a clear sense of direction—defining the big picture, casting vision—but that I also needed to give them more latitude to figure out how to do it. In other words, I didn’t need to do their ministry for them; I needed to release them to do ministry under the mission and vision of the church.

In Part 2 tomorrow, I talk to Jenni about women in church leadership, leadership failure and burnout.