8 Simple (but not easy) Rules for Movement: Part 5 - Prime the Pump

What is the most important step in becoming a multiplying church? The first step.
Jeff Christopherson 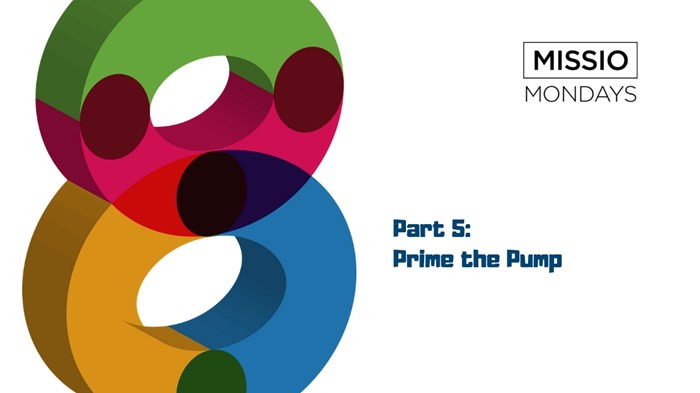 Conversations about church planting often begin with a simple question: “Where do we start?” For many years, it seemed that the majority of churches within North America had few kingdom instincts toward multiplication. Addition seemed to be the only language in which we had native fluency. But recently, many churches are re-embracing their missionary calling found in Scripture and are sensing a growing urgency from the Spirit to lead their churches in the self-sacrificial pursuit of church planting.

Probably the earliest challenge for ‘would-be’ church planting churches is that of finding a capable leader that is called and pre-prepared for the task. In addition to the qualifications for a pastor that is outlined in Scripture, there are also particular qualities that are thought to be unique to church planting pioneers. Often these leaders, when successful, have an observable visionary capacity, an unrelenting tenacity, and an evangelistic zeal and fruitfulness. Such high-capacity leaders are not a dime a dozen in most churches, so the dream of multiplication is often abandoned for lack of leadership.

A Good Leader Is Hard to Find

But before you give up too quickly, there are two ways to produce a pipeline of new leaders. The first, and by far the most effective, requires a long-standing obedience in the same direction. You raise them up from within. Start with the existing youth group, or collegiate ministry, or with those who have recently come to faith in Jesus and set them on a course of personal development.[1] Recent converts are often connected to vast pockets of lostness and are intrinsically motivated to share their newfound faith. A little nudge in the right direction can help them evangelize for the purpose of church planting. It’s clear, however, that this type of work is usually slower and the leaders from these arenas will not emerge fully formed overnight.

Another plan, an intermediate one, is likely necessary in order to avoid settling back into more comfortable missionless rhythms.

In order to establish the desired DNA early (which will become culturally significant for movement), it may be prudent to recruit from the outside and import a quality externally produced leader into your church’s ecosystem. While multiplying churches raise up leaders from within (by definition), in the earliest stages, it often requires importing a leader from the outside in order to prime the pump and get the whole church multiplication journey flowing outward.

Securing a planter early is vital because the longer a church goes without planting a new work, the more difficult multiplication will become. Though a young church may not feel ready to multiply, it’s important that they begin this journey within their first three years in order to establish this missionary DNA early in the life of the church. Importing a leader from the outside may be the best plan for a new church who has not had the gestation time to develop leaders from within.

Team Around the Lead

With a leader in place, the church can then develop an interdependent team around this principal planter. Such work makes more sense once the leader is in place because wise mentors can assess a planter’s gifting and discern the type of team that would best complement the shortcomings of the person they are commissioning to plant.

By using a typology such as the APEST model, the church can equip and build a high capacity team while the new leader marinates in the missionary DNA of the soon-to-be sending church. Done in this way, multiplication provides a powerful way for local churches to demonstrate the value that each individual brings to the missionary assignment of the local church. It’s not just the leader who is vital, but the team of servants using their unique, God-given gifts that is imperative for the body of Christ to be built up.

Finally, the wisdom of experience suggests that budding multiplying churches should tether themselves closely to the new plant for several very practical reasons. For one, this allows the sending church to continually celebrate God’s missionary activity and call their people to higher levels of faithfulness in their missional assignment. Rather than merely commissioning a new work and sending them on their way, a close tether keeps the relationships intact and allows those still at the sending church to see first-hand the kingdom value such multiplication has produced.

Another reason is that it allows the more experienced church to speak into the missional strategy of the upstart. A long history of evangelistic success should not be discarded for unproven theories, however sexy they may look on paper. For the new church start, a tighter tether allows the sending church to lend strength and assistance in a helpful, recurring fashion.

By virtue of the church’s short history, there will necessarily be gaps in the expertise and experience of their new leaders and many unforced errors could be waiting in their future. The new plant would be significantly helped through the consistent encouragement and advise of seasoned leaders to make sure the trajectory of the new work is healthy and strong. Each local church will have to determine for themselves the nature of this tether, but it’s vital that they work through and make explicit the nature of the relationship before commissioning the new work in order to provide clarity, stability, and synergy for both churches.

Multiplication requires intentionality and effort. Finding leaders, building teams, and working out the nature of the relationship are life-giving, ongoing commitments healthy multiplying churches must make. The good news is that once such a process is infused into the missionary culture of the church, future efforts of multiplication will follow a similar pattern.

What is the most important step in becoming a multiplying church? The first step. Start. Cast the vision. Build a process. Prime the pump.

[1] https://www.namb.net/pipeline is an example of training leaders with a three-year trajectory toward church planting

8 Simple (but not easy) Rules for Movement: Part 5 - Prime the Pump