When so-called “secular” work is seen as part of the mission, it can aid the church reproducing the process.
Jeff Christopherson 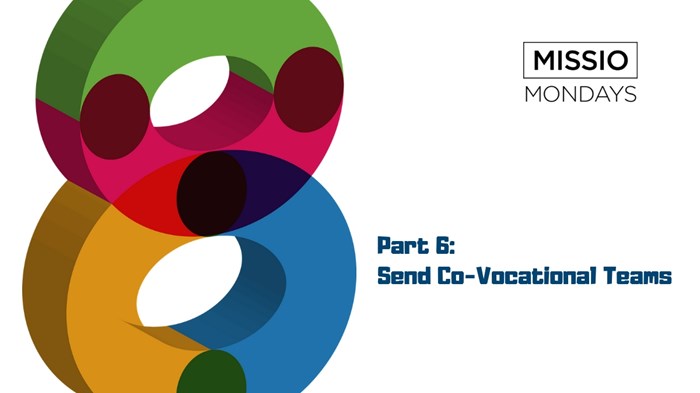 Now that we have a leader in place and a team of complementary gifts established, we are now ready to institute a process for sending them into the harvest. I propose that the sixth step required to establish a culture of multiplication in the local church is to prepare and send co-vocational teams.

A few years ago, I was trying to create a new, vocational imagination within our church planting network, www.sendnetwork.com. We needed a mindset that both valued the sacred calling within the “secular” workplace and leveraged the calling as a kingdom parish for a stout gospel ministry in church planting. The problem was, the only word that we had at the time was “bi-vocation” – the prefix ‘bi’, means two. Two competing ideas. A division of focus. We use this prefix in words such as bisect or bifurcate. It becomes an incongruent schism of the whole.

Very often, it seems, a bi-vocational pastor or church planter had two vocations that were not aligned into a singular vision. One paid the bills. It was a necessary secular evil in order to fulfill the true and legitimate calling of the sacred. If the outside employment could go away and there were enough finances from the church readily available for full employment, that would be the obvious preference.

This idea, although familiar to both our clerical preferences and our ecclesiastical history, is quite foreign to our Scriptures. We needed a new term, a symbol that conveyed a congruent harmonization of work and ministry.

The prefix ‘co’ comes from the Latin, com, meaning with or together. We use it with words like, co-author or co-pilot. It connotes two different things working synergistically together for greater impact. Co-vocationalism is two vocations aligned within one calling and one life purpose that are focused on Jesus’ kingdom.

2. Take Spiritual Responsibility for Your Jerusalem

7. Add in order to Sustain Multiplication

The normative church planting imagination in our subculture is to send a fully-funded church planter into a community in order to open a new congregation. The previous step in our process, “Prime the Pump,” brought some perspective and correction to this common understanding. Rather than sending a solo church planter, I proposed sending church planting teams made up of diverse leaders with complementary gifts. But this alone won’t make our planting efforts more effective or efficient. We also must think about the funding mechanism. Teams have long been the fabled silver bullet for church planting success – the problem has always been directly connected to financial support.

While there will always be a place for fully-funded church planters on certain occasions (such as an apostolic team carving out new beachheads for multiplication), this model as a primary strategy certainly thwarts any possibility for a multiplying movement. Numerous missiological reasons suggest that a complete dependence on a professional planter model is counterproductive for movements. Fully-funded church planters require more resources, requiring a protracted runway to get them on the field, all the while placing a greater financial strain on those that sent them.

Simply put, this means that it will take longer for a local church to get the next fully-funded church planter up and running. Combine these with the message that professional clerics unintentionally send — that is, real ministry is performed by the pros — and we have created the perfect conditions for inertia.

Imagine the normative suburban church attempting to multiply. Based on due diligence, the planter believes that it will cost approximately $150,000 per year to move to the next city, work full-time to establish the church, and have the basic hardware, infrastructure and marketing budget needed to gather a church each week. Not to mention the fact that the planter will likely depend on these resources for at least five years before the new congregation can provide a salary. And, when the church is able to do so, such a salary weight on a young church will most assuredly impede the church’s ability to give to mission or multiply themselves. It’s clear that such a process as the normative model hinders, if not abates altogether, any hope for rapid multiplication.

I believe a better process requires the church to send co-vocational apostolic teams. Rather than forming teams to launch and run a Sunday worship service, we should structure teams of complementary gifts designed to embed themselves in the matrix of society. Intentionality here requires that the planting team find meaningful work outside of the local church. Outside employment, in this case, is not seen as merely a short-term financial means to the end of being fully-funded by the church, but rather as a strategic foothold for ongoing relationships and gospel proclamation.

Planters should be trained to understand their gifts and calling in terms of what best engages the city as a whole, not simply what caters to the needs of the developing church. Such an external orientation spins the planting team into the overall milieu of the culture and protects the movement from the predictable inward orientation that cripples the missional intentionality of the Sunday fixated ecclesia.

The added benefit is that a co-vocational strategy provides a paved pathway for planting teams to enter a new city quickly and free both the sending church and the church plant from the financial weight of their salaries. Local giving can now be redirected from supporting internal infrastructure to supporting missional advance. When so-called “secular” work is seen as part of the mission, and not as a means to the mission, planting teams are positioned to use their God-given gifts and do so in a way that aids the church to reproducing the process. The command of “follow me as I follow Christ” (1 Corinthians 11:1) suddenly has an authentic ring of integrity to it.

For this process to work, however, there must be ongoing accountability between the sending church and the apostolic team. Diverse responsibilities increase the likelihood for mission drift or burnout, so the sending church, in consultation with the team, should establish clear roles and metrics for evaluating meaningful success. Obviously, these marks will be different than simply counting the number of Sunday attenders. They will tilt toward calibrating both the frequency and the fruitfulness of their gospel proclamation efforts within growing spheres of credibility. The exact nature of these externally focused metrics will vary, but what’s important is that they are identified, agreed upon, and consistently evaluated so that the sending church and the planting team are clearly running after the same goals and evaluating success by measuring common priorities.

For movement to transpire, one such measurable metric must be in their efforts toward ongoing multiplication. Built into the missionary DNA of the planted church is a culture of reproduction that leads them, from the earliest days, to prayerfully attempt to reproduce everything and everyone through the disciple-making process of multiplication. This movemental kingdom work is enormously aided, in my estimation, by the formation of apostolic teams of complementary giftings leveraging their sacred callings in co-vocational work so that the gospel is proclaimed and new churches are established.