“The issue that always made Jesus mad was when humans got in the way of God’s love.”
Ed Stetzer 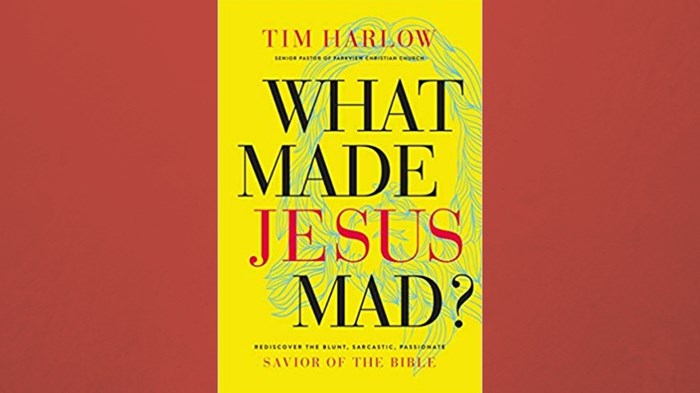 Image: Thomas Nelson/Canva
Today I am glad to welcome Tim Harlow to The Exchange. Tim is Senior Pastor of Parkview Christian Church in Orland Park, Illinois, and author of What Made Jesus Mad? We recently have struck up a friendship, and I am glad to share with you an interview on his most recent book.

Ed: People may not know about you and your church, so please tell us a little about it.

Tim: Parkview was a 40-year-old church when I got here 29 years ago. We are located in the south suburbs of Chicago. We had to go through a relatively long season of transition to get to the point where we were focusing on the goal of reaching those outside the kingdom, which is where we are, and the point of this book.

In 2002, we were able to relocate and get some property, and we’ve been on a pretty wild ride since then. We added a second campus in Homer Glen and then a third in New Lenox. Eighty percent of our people grew up in a Catholic background, which is indicative of the south suburbs.

It’s also a blast for me because they have a love and respect for Jesus and the Word, but they aren’t mired down in a lot of evangelical traditions either. My favorite story is about the guy who bought a WWJD patch for his biker jacket, thinking it meant We Want Jack Daniels.

Ed: Your book is a pretty big slap at legalism. How do you define it, and why do you think it matters?

Tim: Yeah, I’m not a passive rule-following kind of guy. I’m a classic eight on the Enneagram. But the issue that always made Jesus mad was when humans got in the way of God’s love. And legalism is an excellent way to do that. Matthew 23:4 says, “They tie up heavy, cumbersome loads and put them on other people’s shoulders…” And Matthew 23:13 says, “You shut the door of the kingdom of heaven in people’s faces…”

The problem is not the laws themselves; it’s when our interpretation of the laws or even our enforcement of those laws gets in the way of people making it home to the Father. That’s my definition. I don’t think Christians are really comfortable with grace; that’s the problem.

And when we’re not comfortable, we sure don’t want other people to be.

As a matter of fact, according to Augustine, the early church left the whole story out of many manuscripts to “avoid scandal.” We just aren’t all that comfortable with grace.

I love the study that David Kinnaman of the Barna Group did, intending to assess self-identified Christians to determine if their attitudes and actions toward other people are more like Jesus or the Pharisees. He said, “Our intent was to create some new discussion about the intangible aspects of following and representing Jesus.” They tried to identify qualities of Jesus, such as empathy, love, and faith or the “resistance to such ideals in the form of self-focused hypocrisy.”

He found that 51 percent of Christians identified themselves more strongly on the Pharisee side, while only 14 percent (one out of seven) seemed to represent the actions and attitudes consistent with Jesus, as identified by the Barna Group.[1]

What made Jesus mad? When people are denied access to the Father.

Ed: In a world where pastors keep getting in trouble and immorality is everywhere, do we really need a book telling us we need less rules?

Tim: You and I are living in the middle of that world here in Chicago, and it pains me greatly. But honestly, I think this whole attitude is a part of the problem. It leads to hypocrisy, just like it did for the Pharisees. In one of my chapters, I quote a line from my favorite John Mayer song, “Comfortable." It’s about his Christian girlfriend who is "posing for pictures that aren’t being taken.”

To be clear, pastors need to knock it off when it comes to getting in trouble and immorality. We all struggle with our sin nature, but pastors are held to a higher standard and level of responsibility. James told us that, and I own it. The problem is, as we live a “posing" life, we can never get better.

If pastors are living under unrealistic expectations of legalism, they are naturally going to hide the things they struggle with. It’s always best when we can walk into a meeting and say "Hi, I’m Tim, I’m an alcoholic.”

The deal with the rules is this. First of all, if we're still living under the old covenant, we are missing the point of the cross. We should start by figuring out how much of our legalistic tendencies are based on Old Testament commands, or worse yet, misinterpretations of Scripture.

I dangerously use alcohol as an example in my book. It’s dangerous because alcohol is dangerous, and so many people are affected by alcoholism. But when we start to impose that as a rule, or a test for fellowship, we are blocking the way to the kingdom of God. Jesus made wine, Jesus drank wine, and there is absolutely nothing in Scripture forbidding alcohol, but it does forbid drunkenness.

Second, I don’t think we need fewer rules; I think we need a better relationship with our Father. When we begin to see God as our Father who loves us instead as our judge who wants to smite us, all of the rules and guidelines in the Bible start to make a lot more sense. If you can just read "thou shalt have no other gods before me" as "don’t go follow other dads”, this relationship will really start to make sense.

Ed: In your book, you talk about Jesus’ righteous anger. How does this play into this equation?

Tim: This was fascinating to me. Jesus had righteous anger obviously, but his righteous anger was leveled against the church leaders who were righteously angry. For example, they were mad at him because he healed on the Sabbath. That was righteous anger. They were theologically correct but morally wrong.

So he became “indignant.” He rebuked them for straining out gnats while they swallow a camel. Gnats straining was theologically correct, and a huge lesson and missing the point.

If I can mention your book, Ed, without it looking like I’m sucking up, I believe this issue of righteous anger plays out significantly in our current situation. Christians in the Age of Outrage was spot on for me. There certainly are political and moral situations which Christians need to vote and speak into in our world today.

But Jesus was never mad at the tax collectors and prostitutes (those who were living lives in complete opposition to Jewish ethics). He just loved them. I believe Jesus knew that yelling at people doesn’t usually convince them to live differently. He only yelled at the church people who were already yelling at the outsiders.

Ed: “What is the key verse/key story for you?”

Tim: That would be Matthew 23:13 and the Temple Tantrum.

The key verse is Matthew 23:13: "Woe to you, teachers of the law and Pharisees, you hypocrites! You shut the door of the kingdom of heaven in people's faces.”

The key story has to be what I call the Temple tantrum.

At first, I didn’t know what to do with the most apparent instance of Jesus anger. I’d always been taught that Jesus was mad because they were selling stuff in the church so we should never have a bake sale. As I dug into the passage, I believe it is the crucial story for understanding Jesus’ anger.

There are three parts to that statement: Den of Robbers, House of Prayer, and For all Nations.

Certainly, the “robbing” was part of his problem, but I think where they were robbing was the real problem. Jesus was in the outer court—the “all nations” part of the temple—when he decided enough was enough. This was taking place in the Court of the Gentiles. It was the place where God provided access to the rest of the world.

Jesus’ anger was directed at the Jews who turned the non-Jews house of prayer into a market, thereby denying access, literally, to the outsiders who wanted to worship God. In other words, the outsiders, those who felt furthest from the Father, were the ones who suffered the most.

They were being robbed not only of their hard-earned money, by the exorbitant prices of the animals and the exchange fees, but of their very access to God. This practice made Jesus angry because that’s what he came to provide.

John, who wrote his Gospel many years after the other Gospels tells us that the disciples remembered this incident (John 2:17) as a fulfillment of an Old Testament prophecy: “Zeal for your house consumes me” (Ps. 69:9).

Does it make more sense now? Because they were “shutting the kingdom of heaven in people’s faces”! Jesus wasn’t zealous for the sanctity of the temple itself. He prophesied that it would soon be destroyed, and it was. Jesus was zealous for the access to God the temple provided.

He came to rip the veil and give us an all-access pass to a beautiful relationship with our heavenly Father—the relationship for which we were created. He’ll throw tables or animals or people out of the way to give us this all-access pass. He gave up his own life to get us backstage.

Ed: What do you hope the book accomplishes?

Tim: I hope this book frees up a lot of Christians to go love their neighbor as themselves without feeling like they have to judge them or even save them because that’s the Holy Spirit’s job.

I hope people start to understand the concept of being a witness, instead of witnessing. Most of all, I hope the book finds its way into the hands of some people who gave up on a relationship with God because Jesus was badly represented in their life. I hope it helps the prodigal avoid the older brother on his path home to dad.