Praying for a President Is Not that Radical: Platt, Prayer, and Polarization

The outrage against David Platt's prayer for President Trump reveals more about us than David.
Ed Stetzer 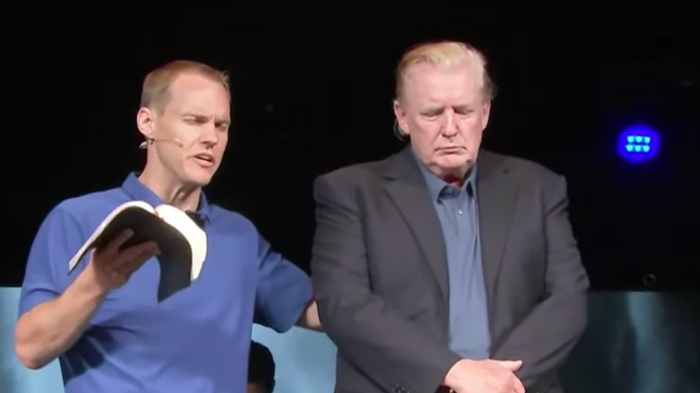 This past weekend, President Trump dropped by McLean Bible Church and was prayed for by Pastor David Platt. You can see the video here.

In years past, this would probably have been seen by many as an admirable practice—a president stopping by for prayer. However, as Emma Green explained in the Atlantic, “Donald Trump’s controversial stop at a Virginia mega-church after a mass shooting showed how even normal Christian behavior has been scrutinized during this administration.”

Yet, this is a different time, and (as most would agree) President Trump is a different kind of president. Four things come to my mind when we think about this situation.

First, the criticism of David Platt was often not fair.

I was frustrated at the arm-chair quarterbacking I saw online, with some saying that he should prophetically have rebuked the president, others saying he should have denied the request, and still others wishing that he’d been more affirming of the president.

I know that every person tweeting criticism of @PlattDavid would have handled it so much better if @POTUS showed up to your place with little notice, but maybe just consider that he is not as smart, godly, or prophetic as you are and try to extend grace to your lesser brother.

Simply put, David Platt made a fast decision when the president came by. To condemn him for that is simply not appropriate. He basically had two choices—either honor the request or not.

Platt could have chosen to decline the visit. This would have inevitably led to attacks from Trump supporters, a public outcry over a pastor refusing to pray for the president, and questioning of his personal position on the president.

Instead, he chose the second option and, in his eyes, sought to model what he saw in Scripture about praying for those in authority.

But let’s give David Platt the benefit of the doubt. He’s earned it. He did what he thought was right in that moment.

There are no parameters when it comes to who we will pray for, and we are specifically commanded to pray for our leaders. Jesus commanded us all to pray for even our enemies. We can debate if that prayer should have been on the stage, but perhaps we can agree that we pray when asked to pray.

Either way, be glad you don’t have to consider a global news-making decision in a few minutes between services—and have a little charity for those who do.

Yes, I know that some people think Platt should have prayed some sort of prophetic rebuke. Others thought that he should thank God for President Trump as a modern-day Cyrus. Still others wanted him to pray as if President Trump was some towering paragon of faith.

David did none of those things. Here’s what he prayed:

The fact is, Anglican churches pray for the president each week. If you don’t want to hear the name of the president, don’t be an Anglican. He is the president. We are commanded to pray for him. You might debate the options (more on that below), but I am thankful for (and concur with) David’s prayer.

Third, David Platt is not some naive political pawn.

Watching Platt be caricatured by critics and defenders of President Trump was a disorienting experience for anyone who knows him. In the midst of this, I was reminded of a story from my earlier interview with a former Trump staffer Cliff Sims :

When we were trying to plan the first prayer breakfast, Sarah Sanders and I were working together to organize speakers, and I wanted David Platt to come...

I talked to David about it, and I don't think he would mind me saying that he was conflicted about that decision. I think one of the reasons for this hesitation was because when pastors get involved in the political space in a public way, there are drawbacks and it can put pastors in a position where people suddenly view them through a political lens…

[I] happened to mention this to Paula White. Paula came to the White House and had a meeting with them and basically trashed David and said something to the effect of, “He believes that the American dream is evil. The President's going to be really mad when he finds out that you're bringing in someone to speak at the prayer breakfast who believes that the American dream is evil.”

In light of these statements, I was a bit surprised to see this was the church where the president stopped to receive prayer. This is the same David Platt who has called for people to give up the American dream and pursue God’s mission. While saying he believes this is evil is a bit of a stretch, he does call Christians to something greater.

Platt has already penned a letter to his congregation explaining his decision to pray for President Trump when he stopped by, acknowledging the hurt that his decision had caused, and ultimately trying to chart a pathway towards unity. He wrote:

I wanted to share all of this with you in part because I know that some within our church, for a variety of valid reasons, are hurt that I made this decision. This weighs heavy on my heart. I love every member of this church, and I only want to lead us with God’s Word in a way that transcends political party and position, heals the hurts of racial division and injustice, and honors every man and woman made in the image of God. So while I am thankful that we had an opportunity to obey 1 Timothy 2 in a unique way today, I don’t want to purposely ever do anything that undermines the unity we have in Christ.

Yet, this paragraph, along with the ministry of the man behind it, captures so much of the current challenge within evangelicalism. While many evangelicals have embraced President Trump, others have deep anxieties about his policies and rhetoric.

Despite the often unheralded efforts of many evangelicals working to bridge this divide with grace and truth, working towards unity in ways that prioritize the gospel in the midst of this season has proven to be a minefield.

Yes, some evangelicals are being used as political pawns now, as they have in the past. Looking at our history, Christians can and must do a better job in avoiding being used by politicians while still being respectful and offering prayer.

Yet faced with these challenges and in looking at what was actually prayed, I believe Platt handled it well and am thankful for him.

Frankly, the bigger message here may be that our divided political landscape means that such individual political moments may now be, ultimately, not helpful.

By “political moments,” I don’t mean taking time to pray for the president. I do mean that when photos are taken while praying, it changes the character of that moment.

The reaction of many tells us that we may be past the day when such moments are not misconstrued.

Furthermore, we can and must recognize that many hold different views and see things in different ways. Where some see praying for a president, others see a celebration of values they do not hold. We can acknowledge that people can and will experience such moments differently in the body of Christ.

Yet, the degree of ire directed towards Platt reveals that at times we can allow the same polarization and fear to grip our hearts in failing to extend grace to those with differening views. Likewise, the attempts to use Platt to endorse Trump fail to grasp the nuances of his prayer and inject meaning he was careful to avoid.

My most recent book, Christians in the Age of Outrage, hits the reality that people are drawn to outrage in moments like this. We set impossibly high standards for political or cultural purity and then relentlessly attack all who fall short. There is never a time when we don’t all need more grace and reflection.

In the future, I think pastors will be less likely to have such moments. Our culture is divided and continues to grow in its division. However, I hope that we will pray more, not less, for our leaders.

Perhaps we can learn from our Anglican friends in praying for those in leadership on a regular basis. The Book of Common Prayer includes this suggested prayer:

O Lord our Governor, whose glory is in all the world: We commend this nation to thy merciful care, that, being guided by thy Providence, we may dwell secure in thy peace. Grant to the President of the United State, the Governor of this State (or Commonwealth), and to all in authority, wisdom and strength to know and to do thy will. Fill them with the love of truth and righteousness, and make them ever mindful of their calling to serve this people in thy fear; through Jesus Christ our Lord, who liveth and reigneth with thee and the Holy Spirit, one God, world without end. Amen.

It’s a good reminder to all of us to press into the hard spaces of grace, beyond where we feel comfortable. May we never have to face God, or each other, confessing that we haven’t prayed for any and all who most need it.

As we walk the tightrope of ministry in our world of polarization, let me echo Platt’s concluding words in his letter to the congregation: “I’m praying now for grace and wisdom for all of us to do exactly what we talked about in the Word today: aim for God’s glory, align with God’s purpose, and yield to God’s sovereignty.”

Platt has been doing that for a long time, and maybe it’s a radical idea that, regardless of how you feel about his prayer, we get back to how best to do that in a polarized culture.

Join the conversation on Facebook
Tags:
None
Posted:
June 4, 2019

Praying for a President Is Not that Radical: Platt, Prayer, and Polarization

Praying for a President Is Not that Radical: ...