One-on-One with Jonathan Merritt on ‘Learning to Speak God from Scratch’ : Part 2

“Missionaries would do well to spend more time learning from their newfound communities as they spend trying to teach them.”
Ed Stetzer 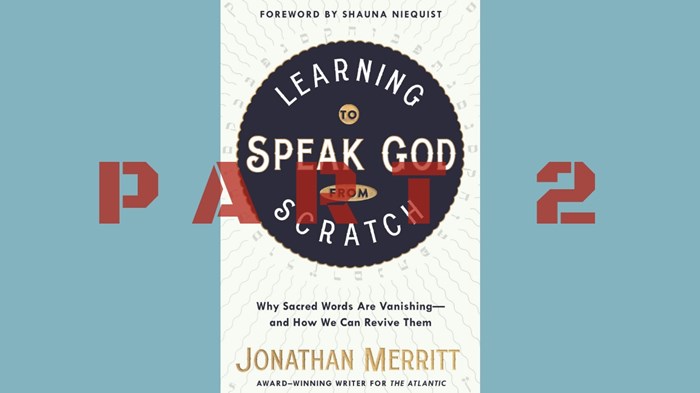 Image: Convergent Book/Canva
I am glad to welcome Jonathan Merritt to The Exchange. Jonathan is one of America's most prolific religion and culture writers. Yesterday we started our conversation. You can view that exchange here. Today, we dive deeper into his new book, Learning to Speak God from Scratch.

Ed: You talked a lot about the importance of learning to speak of God, particularly as you went from the South to NYC. How did that change impact your relationships in NYC?

Jonathan: When I moved to New York City, I encountered an unexpected language barrier. I could still speak English, but I could no longer speak God. I couldn't have free-flowing conversations on spirituality and faith because I was encountering people who practiced different faiths or none at all.

And even many of my Christian friends didn't quite understand my religious jargon. The result was that my friendships became more shallow. We might talk about the weather or sports or maybe politics, but questions of meaning and purpose and the inner-life were largely avoided.

This is actually the experience many Americans are having. According to a study I conducted for the book with Barna Group, only seven percent of Americans say they have a spiritual or religious conversation on a regular basis. That's shocking given that nearly 71 percent of Americans claim to be Christian. The vast majority of our citizens do not often speak about the spirituality they claim is important to them.

Ed: You tied these things into research and missiology, so those parts interested me. What points or research are most important to you?

Jonathan: I was surprised that so few Americans talk about faith for sure. But a lot of us are nominally religious, as you know. I figured that most "practicing Christians," which is to say those who attend church regularly, would buck the trend. But I was wrong, wrong, wrong. Only 13 percent of practicing Christians—that's 1 in 8—say they have spiritual or religious conversations on a regular basis.

I was also surprised to discover that the older you are, the less likely you are to speak God regularly. I imagined that boomers and elders would be talking about God more frequently since they came of age in a period when civil religion was more popular.

This is not the case, however. Why? I think that many older people, Christians included, are disoriented by how rapidly the world has changed. Unlike millennials, they don't know what is acceptable anymore.

They don't know what is "politically correct" and what is not. When you don't know the rules, you won't play the game.

Ed: Explain how you see your book as connecting to missionary endeavors.

Jonathan: I'm arguing for the kind of conversation about sacred words that occurs within a diverse community. Rather than assuming that the way you have understood a word is the right and only way to understand that word, this approach takes seriously others' critiques. We may use a religious term in one way, but when we see how it impacts a woman or a person of color, for example, it helps our understanding to mature.

A good example of this is the word "blessed," which I devote an entire chapter to in the book. The word "blessed," thanks in part to the influence of social media, has become little more than a statement of privilege. It is affixed to photos of vacations to Punta Cana and BMWs wrapped in Christmas bows.

If privileged people remain insulated in privileged bubbles, they might never realize how the way they've used this word falls short.

But if they sit with someone who will likely never be able to afford a BMW or take a lavish vacation, their understanding of the word "blessed" can mature and expand to make space for others.

Missionary endeavors are fertile ground for these types of conversations because they usually involve crossing a cultural barrier and engaging with people who arise from a different context.

Unfortunately, throughout history these endeavors have often amounted to colonialism, imperialism, and exploitation. An American missionary might journey to an African country and teach white Western theology and Bible interpretation.

I hope that a book like mine will remind missionaries that they should enter into other contexts with the utmost respect for those cultures. Missionaries would do well to spend more time learning from their newfound communities as they spend trying to teach them.

Ed: Why not just explain the more difficult terms in the context of relationships?

Jonathan: I argue instead for a transformational approach to language. It is the approach that holds onto the historic language of the Christian faith but allows the words that have become negative or hollow of meaning to transform. This is really the way that sacred speech has always functioned, and it is the only way that the vocabulary of faith can be revived in the 21st century.

Ed: I found your book both helpful and frustrating. I get that words don’t have meaning; they have the meaning that people assign to them. That’s what missionaries have known for centuries. But I left frustrated that it felt like you just wanted people to figure out their own words and meanings. How do we avoid everyone assigning their own meaning to words?

Jonathan: I included a "How-to Guide for Seekers and Speakers" in the back of the book to give people a way forward that they can use to speak God in their own communities. But you're right, this book does not culminate in a 7-step program.

The essays on various words are not intended to become some kind of definitive Christian dictionary. This was intentional. My goal in this book was not to provide the reader with all the right answers, but rather to raise good questions that might provoke them to actually do something.

I want people to get in their own communities and wrestle with these words. It's a more difficult ask than memorizing a handful of steps, sure, but this is the Christian path. We are to work out our own salvation (to borrow from the Bible) even though we are tempted to let our favorite authors work out their salvation and let them be our proxy.

If someone reads Learning to Speak God from Scratch,they will encounter some fascinating data about the death of sacred speech and spiritual conversations; I've even put these into handy infographics to make them easy to digest. Readers will also explore the world of linguistics to understand what is at stake and why speaking God matters.

In its pages, readers will also encounter the various approaches to reviving an ailing language and see why the ones they are probably using don't work. They will finally encounter essays on various words, which serve as an invitation to a "transformational approach" to speaking God.

In a marketplace saturated by self-help books, fix-it programs, and silver bullets, this will not satisfy some readers. But I'm less focused on selling readers a mail-order meal plan and more concerned with helping them learn how to cook.

Ed: Finally, what’s the point? What’s the hope of your book?

Jonathan: The data in this book can be a little discouraging to people like me who love sacred speech. It's alarming to learn that the vocabulary of faith is fading and, if current trends persist, will be an endangered species in America by the end of my lifetime.

However, there is much hope in this book. I spent a year while writing this book studying linguistics and I kept stumbling across something called "comeback languages."

Every year, a certain number of languages on planet earth are snuffed out. But every so often a language will come back. Probably the best example in modern times is Hebrew, which was essentially a dead language until the rise of the modern Israeli nation-state. There are many examples like Hebrew, actually.

In Learning to Speak God from Scratch, I do my best to cast a vision for what the revival of sacred speech might look like, and I try to model this for readers. I'm sure my effort was imperfect, but I hope that something I write will penetrate into readers hearts, arching a spark that will set a fire on their lips.

I'd love to see a movement of God-seekers and God-speakers with a renewed passion for the vocabulary of faith. Those of us who follow the Jesus Way believe that resurrection is possible, but we must be willing to get up and walk out of the tomb.

One-on-One with Jonathan Merritt on ‘Learning to Speak God from Scratch’ : Part 2

One-on-One with Jonathan Merritt on ‘Learning to ...