I want to explore recent trends in the evangelical movement and how they are influencing the movement’s direction and identity.
Ed Stetzer 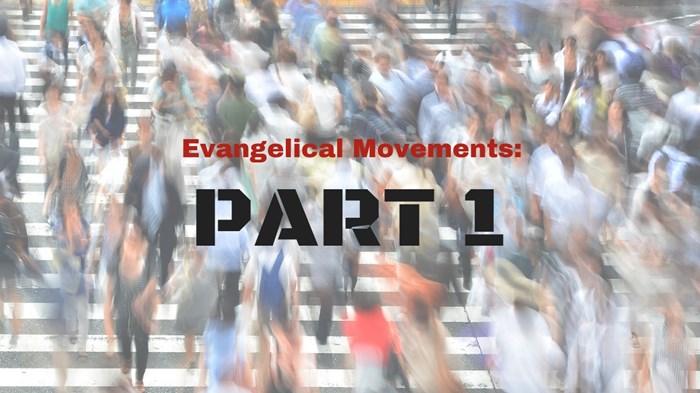 Start an article with the statement “What is an evangelical?” and you are likely to get a healthy mix of eye rolls and frustrated sighs. There are simply better things to do with your time than read the one thousand and forty-eighth article on evangelical identity of 2019.

I get this definition fatigue.

Both a domestic and global movement, evangelicalism can be near impossible to define and therefore challenging to track. If linguists tried to craft a term as ill-defined and ripe for misuse, they would be hard pressed to develop one as perfect as evangelicalism.

As a result, I want to take a step back from the nitty-gritty of definitions to look at broader trends. Taking a 30,000-foot level perspective, I want to explore recent trends in the evangelical movement and how they are influencing the movement’s direction and identity today. Because it would be impossible to look at such trends globally, my focus here (and in the subsequent articles) will be on North American evangelicalism.

I want to start by exploring the legacy of the emerging church and specifically how we seem to living in a period of a post-emerging clarification within evangelicalism.

The Emergence of the Emerging Church

While the emerging church seems like a distant memory to most, for a period of 10-15 years, it was the most talked about movement in American evangelicalism. Pastors and scholars alike were obsessed with the emerging church—its leaders, ideas, methods, and deficiencies.

My intent here is not to rehash the history. Others have done that better and with more details. My intent it to address the impact.

At the beginning, for many the emerging church was a collection of reformers asking questions after the rise of the big boomer churches—the Saddleback’s and Willow Creeks – and their intended and unintended impact on church theology and praxis. In the 1990s, these reformers began to question their own willingness to inherit the systems and structures that boomer evangelicalism had passed on to them.

But, it would be hard to identify just one source or motivation. Ten years ago in an article I published in the book Evangelicals Engaging Emergent (which built on an article I wrote a few years earlier), I tried to explain a bit about the movement and its diversity. In the article, I outlined three broad categories within the emerging church:

First, the ‘Relevants’ This is a term I created to describe leaders focused on making their worship, music, and outreach tactics more contextual to emerging culture. For the most part, they’re just trying to explain the message of Christ in a way that their generation can best understand.

Then there are the ‘Reconstructionists’ who reject certain organizational models of church embracing so called “incarnational” or “house” models.

And lastly, we have the ‘Revisionists’ who are questioning critical biblical principles and ideas like substitutionary atonement, the reality of hell, and the nature of the gospel itself.

In briefly surveying these categories, it’s important to appreciate the diversity within the emerging church movement. Even as the same set of frustrations and questions animated many of its leaders, they represented a wide range of theology and approaches to contextualization.

When many today remember the emerging church, they focus on its most radical expressions. They point out how many of those evangelical emerging choices voices eventually left evangelicalism. And, that is true.

Yet at its best, the emerging church pushed evangelicals to grapple with its philosophical and theological blind spots.

But, using the terms of that day, its leading thinkers grappled with the impact of postmodernism on Christian doctrine while many of its leading pastors honed in on the deficiencies of traditional and seeker-church models, instead emphasizing mission and hospitality as correctives.

Despite bursting onto the scene and captivating the attention of scholars and pastors alike, the emerging church was already beginning to dissolve by the time I wrote my article in 2009.

Obviously, there is a lot of complexity to what “fades” means. Some parts were actually incorporated into other traditions, but if evangelical publications are indicative of evangelical interest, the news stories and books disappeared quickly.

In a 2010 article in World by Anthony Bradley, evangelicals bid farewell to the emerging church. Arguing that “the theological lines have been drawn and are settled,” he announced that everyone had moved on. In conclusion, Bradley noted that “while the effects of the emerging church movement will linger for some time we will begin to see books praising and attacking the movement go out of print.”

He was correct. The few articles and books that followed focused more on legacy than vision as the emerging church has largely faded into memory.

My article here is not intended to be a post-mortem. Others have done that (and better than I could). However, it is more about what the emerging church left in its wake— the fact that many evangelicals clarified what they believed because of the emerging church movement.

Understandably, the emerging church provoked a wide range of conversations, many of them uncomfortable and provocative. As an evangelical, I’d also be remiss if I did not say that it led some away from what I see as an orthodox evangelicalism.

First, it caused evangelicals to rethink who we are as a people of God, often helping people to see more clearly how the mission applies to us today. It challenged ideas such as consumerism, nationalism, and more.

Second, and more importantly for this article, it compelled many evangelicals and their organizations to clarify what they did—and often in this case, did not—believe.

I believe a central legacy of the emerging church is how it compelled many of organizations and churches to clarify their understanding of the gospel, marriage, conversionary evangelism, and other issues. The emerging church tested the boundaries of evangelicalism, forcing us to settle what theological matters we are comfortable questioning and those that are beyond the pale.

The Normal Process of Clarification

We are in the midst of a post-emerging clarification of what it is evangelicals believe and who we are. That’s not new news. Movements respond to reform initiatives all the time. It helps shape them.

Furthermore, this is hardly new within evangelicalism itself. Evangelicalism has a long history of heated theological battles internal to the movement, and part of the emerging church certainly was within the movement (and some still is). In The Evangelical Heritage, Bernard Ramm reflected on how the movement is at times best understood by its ability to have sharp theological disagreements within itself.

Ramm identified eight central theological debates ranging from eschatology to inerrancy to the relationship between science and religion. Underlying each debate was the prevailing sense that despite disagreement, both sides were still evangelical. Calvinists and Arminians may disagree—even passionately—yet recognize that evangelicalism was robust enough to include both.

Today the number of these debates seems to have grown exponentially even as this underlying agreement has become more ambiguous.

Though much of the emerging church is gone, or has become a wing of mainline Protestantism, the season of questioning and boundary-testing that defined the emerging church has injected a sense of urgency to the discussion. The multitude of definitional, methodological, and identity questions that the emerging church asked have continued on within spheres of belief, mission, and politics for nearly a decade.

Put another way, we are still in a season of post-emerging clarification within evangelicalism.

There is much more to the movement than that, but the emerging church forced many evangelicals to state clearly “this is what we believe, and this we don’t believe,” and that’s important.

For generations, the definition of evangelicalism was a mild curiosity of few select scholars and pollsters—the subject for sparsely attended academic conferences and underappreciated journals. Over the past decade this debate has spread to the public consciousness as we have become inundated with a steady barrage of articles, books, and conferences seeking to define the movement.

The questions provoked emerging church brought the issue to the attention of many.

Tensions surrounding what we believe, where we break unity, and how we engage others that claim evangelicalism yet diverge on these central issues are now at the forefront of the movement. “Can someone be an evangelical and hold X?” is a common thought experiment with hundreds of qualifications designed to tease out exactly where and how the movement draws boundary lines.

To be sure, this season of post-emerging clarification is not the sole trend responsible for the current state of evangelicalism. The emerging church did not cause an evangelical crisis. Yet understanding this movement and its legacy helps us understand where these definition questions arise from and their import to the movement today.

In my second post, I want to explore recent evangelical approaches to politics and, more importantly, the overarching sense of political angst that continues to define much of the movement.

Thoughts on Recent Movements in Evangelicalism: ...