Another Way for Immigration Reform? How Evangelicals Can Help Lead It 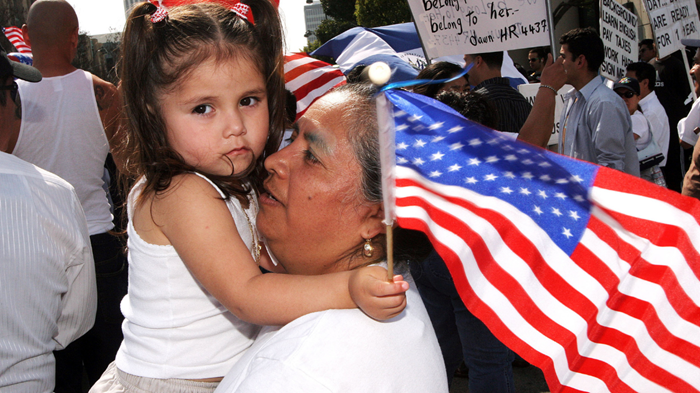 Image: By Krista Kennell via Shutterstock
For many years, I’ve been a supporter of the Evangelical Immigration Table’s call for immigration reforms consistent with biblical principles. Recently, they elaborated on those principles by releasing an Evangelical Call for Restitution-Based Immigration Reform, which I’ve personally signed onto, as have many denominational leaders, Christian college presidents and local pastors. I’d invite you to add your name to this statement. Matthew Soerens, who coordinates the Evangelical Immigration Table, explains the rationale for this approach.

This August, after more than three decades in the United States, 66-year-old pastor’s wife Julita Bartolome was deported.

Her U.S. citizen husband, a Baptist pastor and a custodian at Chicago’s Moody Bible Institute, had been trying since 2002 to get his wife permanent legal status. Now separated from his wife by an ocean, he intends to keep trying to get her back.

The case has many troubled, particularly among the evangelical community, of which Julita and her husband are a part. Many are asking if there is a better way than this.

They’re not alone in asking this question. One local church in the heart of the Bible Belt recently lost 150 congregants to an immigration raid. Another town – Morristown, Tennessee – found itself deeply shaken in the aftermath of a 2018 raid. Many of its residents are evangelical Christians who voted for President Trump despite – or even because of – his harsh rhetoric on immigration. Yet the raid complicated and colored their perspective.

“When I heard ‘crack down on illegal immigration,’ I interpreted it as a crackdown on illegal immigrants that were criminals,” Krista Etter told This American Life “If there was a drug situation, you know, violent criminals, pedophile, any kind of situation of that nature. That’s what I expected…I don’t think anybody ever really stopped to think that they were going to go after the family man working at the meatpacking plant. That’s not what I had in mind.”

David Williams, a Southern Baptist pastor in Morristown, concurs: “I think people were voting for a secure border. You know, surely people didn’t vote that families would be separated, and that families torn apart, and children scared.”

They’re not wrong to express these concerns.

President Trump famously promised to get rid of the “bad hombres.” But only about 13 percent of the roughly 47,000 immigrants held in detention facilities at the end of last year had been convicted of a serious criminal offense.

Most, like Julita Bartolome, have never convicted of any crime at all.

Detaining so many non-violent immigrants is also expensive. The county jail where Julita Bartolome was held for roughly a month receives nearly $100 per night per detainee from taxpayers in the form of a contract with the federal government. Other detention facilities, often operated by private companies, are even more expensive: on average, ICE says immigrant detention costs $134 per night, per detainee, meaning the detention of non-criminal immigrants costs taxpayers at least $4 million per night.

And that number fails to take into account the loss of tax contributions from the detainee or the cost of public support for U.S. citizen children in a previously-self-sufficient family.

This is a policy that very few Americans think is prudent.

Just 14 percent of Americans believe our immigration policy should prioritize deportation, according to a 2017 Fox News poll. Eighty-three percent prefer a plan to allow immigrants in the country unlawfully to eventually become lawful permanent residents.

As I speak in evangelical churches on a regular basis, I find most evangelicals are desperate for an approach to immigration that respects biblical principles. That means keeping families together whenever possible, being fair to taxpayers and insisting that our government fulfill its God-ordained responsibility to secure our borders and protect citizens from harm.

It also means respecting the law – the point on which evangelicals feel most conflicted. While they don’t like raids and mass deportation, amnesty – which means dismissing and forgiving the violation of U.S. law – is also a non-starter.

The solution lies in the middle.

Dozens of the most prominent evangelical leaders in the country – leaders of evangelical denominations, presidents of Christian colleges and seminaries and pastors of prominent churches – voiced their support for a process that would require undocumented immigrants to get right with the law by paying a significant fine.

If they could pass a criminal background check and meet other requirements, they would be given the opportunity to gradually earn permanent legal status. Most immigrants I know would be thrilled to make things right and stay lawfully with their families.

President Trump’s approach to immigration is going too far, even for the evangelicals who helped to elect him. But President Obama’s record – which also involved deporting thousands of immigrants and separating many from their U.S. citizen children – was also inadequate.

A real solution cannot be done by the executive branch alone; it would require Congress to act on a bipartisan basis.

Julita Bartolome is in the Philippines now. But there are many individuals like her whose families could be spared this heartbreak if evangelical Christians will speak up for restitution-based immigration reform – and if the president and congressional leaders in both parties will listen.

Another Way for Immigration Reform? How Evangelicals Can Help Lead It

Another Way for Immigration Reform? How ...