We've come a long way from a plea for marriage equality.
Ed Stetzer 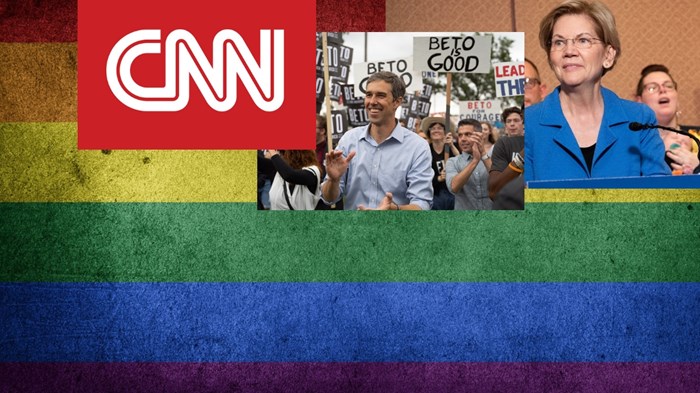 Watching the Equality Town Hall on CNN yesterday was both instructive and disconcerting.

It was instructive because I really did want to see where we were as a nation—and how divided we might be on questions related to religious liberty, the LGBTQ+ community, and the need for us to all live together in one democracy.

I was struck by the fact the debate was regularly interrupted by protestors. What we all need to acknowledge is that many people who identify as LGBTQ+ have felt marginalized and discriminated against, and have seen violence as a part of their reality.

That should leave us all with a deeper sense of compassion and concern. People spoke of their lives being at stake; as Christians, we should be the first ones to hear and honor their anthem of desiring safety and protection.

Furthermore, I left surprised at the level of change that is taking place in the Democratic Party— this is not President Obama’s party anymore. Barack Obama actually broke his campaign promise and allowed faith based partners to, well, keep their faith central throughout their ministries, even when partnering with the government. His (limited) accomodations to people of faith simply would be far from the converstaions last night.

We’ve come a long way in a short time.

And, because of that, I left with religious liberty concerns.

I’m concerned with the clear and complete disregard around religious liberty. This term was used a few times, often with the phrase “so called” tacked on. Candidates would say they affirm religious liberty, but then describe exactly how they did not.

Elizabeth Warren was asked a revealing question: How would she respond if an "old fashioned" voter told her that they believed that marriage is between one man and one woman? She retorted with, "I'm going to assume it is a guy who said that,” before answering, "Well then just marry one woman. I'm cool with that."

There was much applause. However, she then shrugged, adding, “assuming you could find one.” The audience roared with laughter, further insinuating that any person who held such values is so out of step, bigoted, homophobic, and small minded that he could not find someone who would be willing to marry him. (See the CNN clip.)

But let’s be honest: that’s really not the issue. The issue is: Can people dissent from what is now the majority view of marriage? As we saw, Warren not only mocked those who disagreed but advocated for policies that seek to marginalize and penalize those who do hold a biblical view of marriage.

Contrary to Warren’s playing to the choir, these views are not representative of frustrated men but rather reflect a broad array of people of faith— people many Democrats have recently ignored.

In the aftermath of the 2016 election, Slate published an analysis of “Why Hillary Clinton Bombed with Evangelical Voters.” In the article, I said it appeared that Hillary Clinton was working hard to alienate evangelicals—and she succeeded.

Later, the news would be how evangelicals had aligned with President Trump, while neglecting the clear and obvious reality that even Slate Magazine noticed: when it comes to evangelicals, Hillary was disengaged and even alienating.

Last night's CNN debate was a perfect example of that same alienation.

While Warren’s quip lit up social media, another candidate delivered the biggest surprise in giving voice to what many perceived to be the trajectory of religious liberty debates, long left unsaid by other Democrats. Facing a question over the tax exempt status of churches, Beto O'Rourke asserted that not only churches but any organization that opposed same-sex marriage, should lose their tax exemption.

I tweeted a link to the Beto video and this comment:

2019: We want the tax exempt status of the churches, charities, and colleges revoked for your failure to change your views on gay marriage.

In 2009, the mantra was “We just want our marriage equity. We just want to be able to let love be love.” Ten years later, the goal posts have moved for many: affirm the new orthodoxy on same sex marriage—or lose tax exempt status. This is quite a striking position, considering all the institutions he mentioned (churches, charities, and colleges). That’s your religious hospital, the orphanage, the homeless shelter, and more.

Now, this was Beto O’Rourke, not every candidate. But, it is important to consider the Equality Act if we want to talk about the broader field of Democratic candidates.

Equality Act is widely supported by the Democratic political candidates for president. That act has significant implications for the very institutions that Beto did mention—charities and colleges.

The Equality Act would in essence say that our beliefs are unacceptable and that we must change. As the Council for Christian Colleges and Universities (CCCU) explains:

The Equality Act fails to provide essential religious liberty protections that would allow a diverse group of social service and civic institutions to continue to thrive. In particular, as it relates to the sector of faith-based higher education that has religious convictions around marriage, human sexuality and gender, including CCCU institutions, these laws would conflict in ways that would put at risk their ability to hire and operate in accordance with their religious missions and would restrict student choice in an unprecedented way by preventing middle and low income students from being able to take their federal student aid to these institutions. Faith-based higher education has always been an essential element of the diversity of the higher education system in the United States—many of the first colleges and universities in the United States were religious—and it is essential that any protections for LGBT persons be paired with the essential religious freedoms that maximize freedom for all.

The reality is that evangelical Christians, conservative Catholics, practicing Mormons and other people of faith are going to have to find a way to live in this same country where Obergefell is the law of the land. We also have to find a way for the LGBTQ+ community, and the people of faith who come to different views about marriage and gender than many others do, to live in peace.

Even as that Supreme Court ruling fundamentally changed society, we have not fully grappled with its consequences in learning to coexist. Some may think this is impossible, but I don’t believe it.

Evangelicals should affirm the fact that LGBTQ+ persons are made in the image of God and worthy of dignity and respect. They, too, have civil rights and those rights will have to include employment and housing protections.

That’s not the real issue.

But there are, indeed, real issues. And we heard some of the pain and fear from the LGBTQ+ community last night.

But, there are also religious liberty issues— which were dismissed last night.

Even the Supreme Court has seen that there are, indeed, real religious liberty issues at work, contrary to the mocking at the Equality Town Hall. That's why the Supreme Court actually ruled for the Masterpiece Cakeshop several years ago. The real issue was the forced participation in an event with which you religiously can’t agree.

Yet the CNN Equality Town Hall simply pointed out that this is not enough. Too much of the Democratic Party's solution is to end dissent (and public participation) from people who hold (now) minority views.

The message is loud and clear last night. And the result is clearer: this kind of thinking will drive a substantial number of evangelicals, some of whom would otherwise be uncomfortable voting for President Trump, to voting for him in 2020. Why? Because they see it as the only alternative.

I’ve been a vocal critic of President Trump, probably at a national level few evangelicals have been. I won’t rehash all that here, but I’m not one who has been quick to take up every right-wing talking point.

However, at the end of the day, the message is loud and clear.

As Hillary Clinton did, the Democratic Party is working hard to alienate evangelicals.

And evangelicals are getting the message.

Join the conversation on Facebook
Tags:
None
Posted:
October 11, 2019

The #EqualityTownHall Was Loud and Clear: The ...