A critical part of the broader diaspora movement of people is international students among us.
Beau Miller 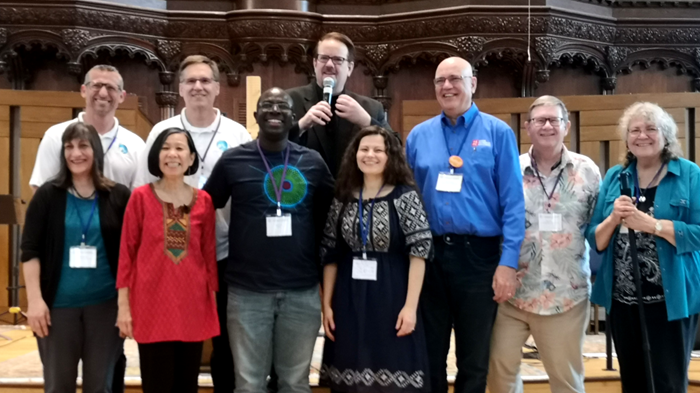 Image: Ed Stetzer
In the past decade the number of international students has skyrocketed in the US and even more so in Canada, resulting in nearly 1.5 million tertiary-level international students among the two countries. Christ-followers have responded with biblical hospitality, unconditional friendship, and sharing the truth of God’s Word with these visitors. God is on the move. Below, Beau Miller, Executive Director of the Association of Christians Ministering among Internationals, talks about international student ministry and the new ISM Lausanne North America Strategy Group.

This summer, 300 people gathered in downtown Toronto to be part of a conference on international student ministry, commonly referred to by practitioners as ISM. The event, GLOBAL CAMPUS: Babel or Pentecost, was one of the two largest and broadest ISM events in the history of Canada.

Although uniquely collaborative, featuring several sponsoring agencies, the conference was led by the Association of Christians Ministering Among Internationals (ACMI), a networking body of ISM-engaged people in North America and beyond. Since 1982, ACMI has been holding these annual events for inspiring, learning, and networking among Christians engaged in ISM. ACMI has a robust history of drawing experienced practitioners of ISM who can learn from and network with each other.

Gospel outreach among international students and scholars is one of the most sensible responses to Christ’s Great Commission in our day. The church can share the love of Christ among those whom God has sovereignly placed at nearby colleges and universities—without leaving our neighborhoods and in a cost-effective manner.

These visiting internationals speak English and often desire friendship with Americans. They are bright young people who go on to positions of leadership or influence, and they tend to come from less-reached parts of the world.

We are truly enriched to have these visitors among us. They are diligent students who enhance the mosaic of our universities and allow opportunities for us to have personal contact and friendships with people from other cultures. International students and scholars can also help make our fellowships and churches more heaven-like (Revelation 7:9). Foreign students are also an economic boon to the U.S., contributing $39 billion to its economy and supporting over 400,000 jobs.

In light of these things, and we have both good and bad challenging news. The good news is that God is at work, and the international student ministry movement in North America is growing. The challenge is that we’re having a hard time keeping up.

In the U.S. alone it’s been estimated that we (aggregately speaking) are only reaching about 20 percent of the international student population with the good news of the gospel. How can we see this percentage increase?

One critical path to increased outreach is to further mobilize volunteers and local churches in the cause. Many believers and churches are located within just a few miles of students’ residences or locations of study. What an opportunity for the church to befriend and share Christ’s love with the nations who have come to us!

Below are a few newly-released tools that can be used individually or in group contexts to help believers catch the vision for, and practically engage in, ISM:

Another development in the arena of ISM is thought leadership. Last year, a group of ISM national leaders met with Lausanne North America leadership to discuss how the cause of ISM could be furthered, including informing the church in North America about what is happening.

After further discussions, a strategy group for ISM emerged. At the GLOBAL CAMPUS conference in Toronto, the group was formally launched (photograph below). This strategy group is comprised of leaders within the ISM movement and is tasked with giving leadership to this crucial work.

This involves helping to identify and produce resources for the church in North America, evaluating current gaps in ISM ministry engagement, and determining any needed macro-level strategy.

As we are in the beginning stage, the strategy group is taking time to access the key issues in ISM that need to be addressed. This could include “gaps” that are not being addressed by current collaborative efforts in this highly connected field. As part of the process, the group chose to canvass directors from their own and some other ISM organizations as to determine the key issues. A couple examples are: suffering and persecution that international students could face and preparing students to return to different-looking churches in their home countries.

The world is changing. People are on the move. A strategic part of the broader diaspora movement of people is international students among us, and we know Who is in control of the process (Acts 17:26, 27).

May Christ’s church be the ones to welcome, befriend, and offer the greatest gift of all to these guests.