“There is a revival in much of the Global South, and Latin America is a part of this revival.”
Ed Stetzer 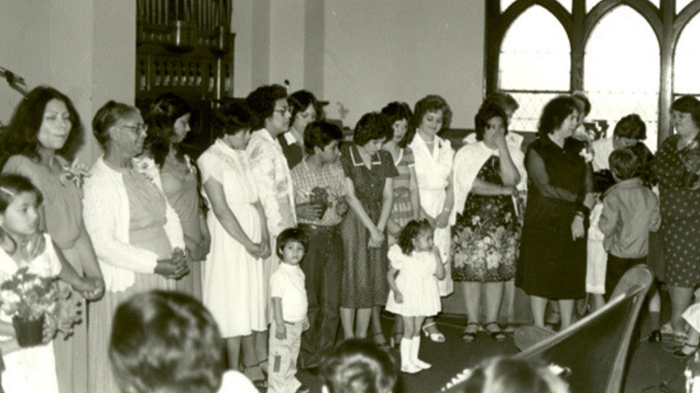 Image: Mennonite Church USA Archives
Today, I am glad to welcome Gabriel Salguero to The Exchange to talk about Hispanic Heritage Month. Gabriel is president and founder of the National Latino Evangelical Coalition (NaLEC).

Ed: We are at the last day of Hispanic Heritage Month. Why does such a month matter?

Gabriel: Celebrating diversity is not a political or cultural agenda; it is part of a gospel-centered calling birthed at Pentecost and highlighted in John’s eschatological vision of a multitude of saints from every nation, tribe, and language.

Moreover, The United States is an increasingly diversifying mosaic that holds to the motto, “E Pluribus Unum”—out of many, one. Part of the DNA of this country, when it’s at its best, is to celebrate our diversity.

In a hyper-politicized and balkanized culture, the church is essential to moving the nation beyond division into a Pentecost moment where we hear and speak to each other for the sake of our Christian witness and mission.

The celebration of different heritages and cultures is a wonderful way to partner in mission, enrich our ecclesiology, deepen our fellowship beyond homogeneity, and broaden our worship beyond monolithic liturgy.

As American Christians, we are a part of a global church, and the better we are able to understand, celebrate and appreciate each other, the easier it will be to partner with the mission of God.

After Mexico, the United States has the 2nd largest country population of Hispanics in the world. By the way, there is no consensus on which term to use; Hispanic, Latino/a, Latinx are often used interchangeably. There are many reasons for these variations, but that would be an entirely other lengthy conversation.

Ed: What do you wish other Christians knew about their Hispanic sisters and brothers?

Gabriel: One of my prayers is that U.S. Christians become aware of the contributions Hispanics are making to the health and growth of the U.S. and the global church. In honor of celebrating Hispanic Heritage Month, let me name a few key areas and leaders who are making a significant contribution to the work of the Kingdom of God. Of course, evangelical Latinos are so numerous, so what I share is not an exhaustive list.

One key area is in church planting and church growth. Some weeks ago, Lifeway Research published a study on the significant contributions of Latina and Latino Church planters. One of the major learnings is that Hispanics often do more with less resources. Key leaders like Robert Guerrero and Dr. Michael Carrion of City to City, Dennis Rivera of the Assemblies of God, and Dr. Liz Rios of Plant 4 Harvest are leading, writing, and training around Hispanic church planting.

Another key contribution I have written about is what I coined “the growth of Latino-led multiethnic churches.” In most denominations, the largest number of church plants and growth is among the Latino immigrant and 2ndgeneration congregations, but there is also an increased number of multiethnic congregations which are Latino-led.

Another major contribution is in global missions. For many decades, Hispanics have no longer been the mission field, but a major missionary force.

For example, there are Latino-led mission organizations like COMINHA and PUENTE HISPANO that are training missionaries to reach unreached people groups in very sensitive areas. These two organizations are focused in outreach to Islamic countries and China. Hispanics often find a lot of cultural similarities with people in Africa and Asia, and are key partners in global missions.

Two other major areas that should not go unmentioned are education and advocacy. Many seminaries and Christian colleges are benefiting from the contributions of Hispanic scholars. Schools like Fuller Seminary, Wesley Seminary, Asbury Theological Seminary and Gordon-Conwell Theological Seminary have implemented Spanish-language graduate programs.

In addition, Hispanics are an increasing number of the general student body of many CCCU schools. Theologians and educators like Dr. Justo González, Dr. Joanne Solis-Walker, Dr. Juan Martinez, Dr. Elizabeth Conde-Frazier, Dr. Eldin Villafañe, and Dr. Pablo Jimenez, to name just a few, were pioneers in launching Latino-friendly programs across the country.

These organizations have been catalytic in calling for pro-life and pro-family policies, immigration, education and criminal justice reform and they have advised members of Congress and Presidents from both parties on key public policy issues.

The Latino evangelical church has come of age through many bilingual and bicultural leaders who, like Esther, Daniel and Joseph, are national leaders who arose from exile or the diaspora.

Ed: It seems there is a revival of some sort going on in parts of Central and South America. Do we see that here?

Gabriel: Indeed, there is a revival in much of the Global South, and Latin America is a part of this revival. If by revival we mean a turning to God that revitalizes the church, reignites a passion for evangelism and church planting and transforms society, then we are truly experiencing that both in Latin America and among U.S. Hispanics.

The revitalization of the Church is, in part, due to the re-evangelizing of the global North by immigrant groups, including Hispanics. There are, however, some warning signs that the Latino church ought to heed.

The longer Hispanic children live in the U.S. culture, the more secularized they become. Regrettably, in some cases, as Latino Millenials and GenZs assimilate into the dominant culture, they tend to adapt the tendencies toward secularization of their non-Latino counterparts.

My prayer is that the vitality and passion of the Latino church would be part of a multicultural, multigenerational revival in America that draws people to Christ.

Ed: What would you say to a country (and many white evangelicals) who are concerned that there are too many Hispanics coming across the border?

Gabriel: It is impossible to talk about Hispanicity or Latinidad in the United States without addressing immigration. Although, the majority of Latinos and Latinas living in America are U.S.-born—about two-thirds of U.S. Hispanics are native-born. Still, since Latin America is one of our closest neighbors, immigration has always been a part of the reality of the southern border.

My advice, for what it’s worth, is for my white evangelical brothers and sisters first to ground our perspectives on immigration with a biblical worldview.

While Scripture does not prescribe a specific policy agenda, it does highlight a posture and core principles from which we can talk about immigration, borders, law, justice, and mercy. A good starting point is the Christian principle of honoring the imago Dei in each person that resists xenophobia.

In addition, Scripture teaches us to balance respect for the rule of law with advocacy for more humane and just laws that defend the widow, orphan and stranger. As evangelicals, we can do both; it is not an either/or proposition.

Second, the evangelical church can be informed about the push and pull factors that draw people to the United States. Many immigrant families are fleeing violence, extreme poverty and political corruption and persecution. Instead of solely responding to the symptoms of migration, the U.S. evangelical church can help, through its development, advocacy, and missional work, alleviate some of the root causes that lead to massive migrations.

Endorsing budgets that support sustainable foreign aid through USAID is one helpful way to lift our collective Christian voices. In addition, organizations like World Relief, World Vision and The Immigration Coalition are great church partners to help congregations serve immigrant families arriving to the United States.

Ed: How can we better understand our Hispanic sisters and brothers?

Gabriel: Something I’ve always valued about our friendship is that we have always given each other time to speak and listen. I truly believe that the best way to better understand any group is through deep relationships that help us see and hear the other person or group.

The first step is reaching out. Beyond casual conversations we can seek out and develop friendships with people across cultures. In the breaking of bread, deep and lasting friendships we can in the to paraphrase Dr. Martin Luther King, Jr., “transform the jangling discord of our nation into a beautiful symphony of brotherhood and sisterhood.”

This will take time, intentionality, and radical boundary-crossing faith that sees that God’s purposes can only come when we honor and empower the whole body of Christ. ¡Felíz Mes De La Herencia Hispana!

One-on-One with Gabriel Salguero on Hispanic ...