“High Christianity’s positive contribution to artistic culture can actually spill into every area of our lives.”
Ed Stetzer 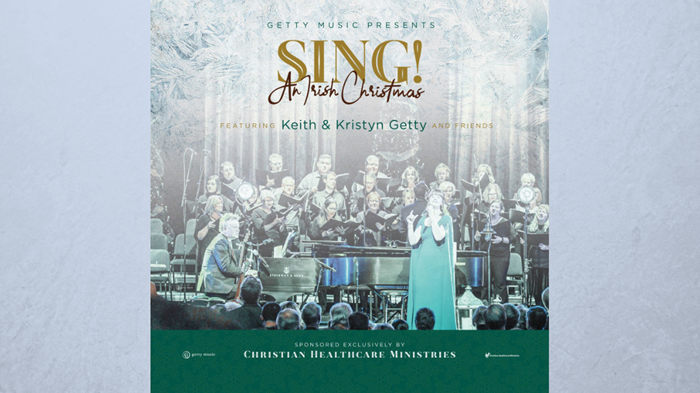 Image: Getty Music
Keith and Kristyn Getty of Getty Music just released a new album (today) entitled Sing! An Irish Christmas.I had the pleasure of talking with Keith about the album and its significance. I’m particularly interested in their desire to revive a focus on ten key Christmas hymns. Here’s our conversation.

Ed: Keith, the album is dropping today. Tell me, what is this all about?

We started writing this Christmas music ten years ago, and we could never have dreamed we’d get to do this ten years on.

But the Sing! Conference this year was ‘The Life of Christ,’ and the first day was ‘An Incarnation.’ Just as we were thinking about that and what we would do in the evening, we were talking about a new television special with PBS. TBN came around and said, “We want to put this around the world,” and they made a bigger vision for it. They said “Let’s create a new television special.”

So on the hottest day in 2019 in August, we recorded two Christmas shows at the Grand Ole Opry. So it’s really exciting; it’s part of a campaign to help to get the nation to learn the ten great carols of the faith in the hope that the people learn them and sing them to their kids and their grandkids and their friends, and that it will be something that they remember as the years go on.

When we were PBS artists, we would do half of our interviews on faith radio and half would be public television interviews, and there was quite a lot of questioning about why we would be trying to do religious carols, because apparently, in current surveys, only one in the top 40 Christmas songs is religious now, and this got me really riled up.

I thought, I’ve got to get people back to learning these carols, because they’re the master works of the Christian faith, and they help us learn it, and they are just so good to sing.

Ed: And they’re really rich in knowledge of what the gospel is, why the incarnation matters, and more. So we can sing peppy, happy Christmas songs, but you want us to go deeper with these hymns. Tell us, why does that matter?

If you want to take the Ed-Stetzer-theological-analysis, what we sing in church tends to be either theological about the gospel or experiential. Actually, when you weave the incarnation into the whole thing, it weaves this incredible line because you’re singing the theology, but you’re singing it from this vulnerable position, and you’re singing about Christ’s life and his birth.

It’s all the more attainable for people than just straight doxological hymns are.

The second thing is: they’re masterworks. I mean, you take ‘Hark the Herald Angels Sing’ and you think, Oh, that’s a cool little hymn. It’s by Charles Wesley, the words, but the melody is by Felix Mendelssohn, who wrote the greatest violin concierto in history.

Or you take something like ‘In the Bleak Midwinter’, which was Christina Rossetti, who was the finest poet of her generation, who combined with Gustav Holst, who wrote ‘The Planets.’ So you have the greatest people in history contributing. These are massive artistic pieces, albeit little beautiful miniatures that everybody can grab ahold of, but they really are incredible.

There’s a reason why C.S. Lewis said, “Read two books by a dead guy for every one you read by a living guy.”

Ed: I remember a having a guest at a Christmas Eve services once at Moody Church. He did not go to church, but came out that night because it was Christmas Eve. And, I watched as he knew the words. Does that play into this?

Keith: What we did this year was we launched something called Founding Carols—which is the ten carols and possibly extras—out of Cape Town two weeks ago, and now we are launching it as a second hour as Christmas Live, live from the Grand Ole Opry, as sort of an adult live television special.

What we’re trying to do in the next few years is hit all of the major cities in America. We’re trying to get schools, churches, getting them to learn these carols, to sing them to their children and grandchildren. We want everyone singing these ten hymns at Christmas time.

Because, as you found with the guy who came to Moody Church, once you sing them for one, two, or three years, they’re committed to memory for life—because they’re so beautiful. So this is another wonderful way of helping these people.

It’s another way of showing how high Christianity’s positive contribution to artistic culture can actually spill into every area of our lives.

Ed: When people of Christ sing songs like this and they may not fully believe what they are singing, how can these kinds of songs help people to fully believe?

Keith: It helps them learn and remember. Singing is how we learn something. Scripture talks about musing something, which is setting it to music, which is how we memorize it. The number one way this was brought to American culture was through the American Sunday School movement. Sunday School movements were started as singing schools where adults and children would go to sing truths to themselves so they would learn them.

But it’s more than that it just affects our head and memory: It affects our heart and reminds us of these things in a beautiful way that is winsome and moving and, at Christmas, is at the level of sentiment.

In the Christmas season our emotions are heightened—our sense of a good year or a bad year, our sense of life getting better or life slipping away. Hurts, pains, and family dysfunction all tend to bite a little bit more the closer you get to Christmas.

This is a chance to say, “Come thou long expected Jesus, born to set thy people free, from our fears and sins release us, let us find our rest in thee.” Or “How silently, how silently thy wondrous gift is given so God imparts to human hearts the blessings of heaven, no ear may hear his coming, but then this world of sin where meek souls will receive him still, the dear Christ enters in.”

How many parts of our culture today are actually speaking beautifully about meekness? How many people are being reminded that no matter what you’ve done this year, no matter what mistake you’ve made, no matter how much money you blew, how many people you offended, how many things you can never do again, whatever has happened to your health, still, still, still, the dear Christ can enter in?

Learn more at gettymusic.com. The playlist is here.

One-on-One with Keith Getty on SING! An Irish ...