Rural Matters
The Rural Matters Institute is a community for pastors and Christian leaders serving in non-urban contexts that was created to provide support, learning, and community. Read more from this column.
September 4, 2019Rural Matters 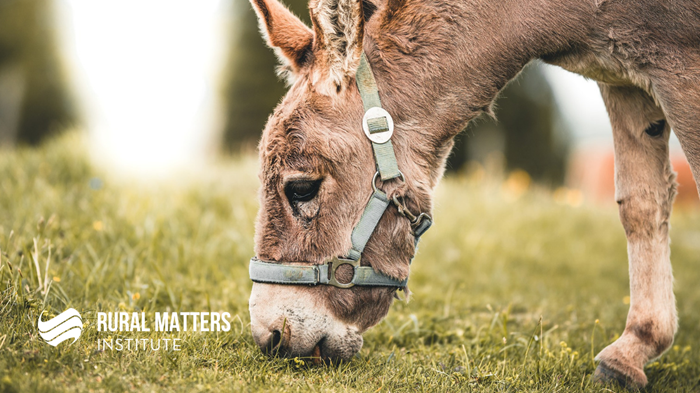 Disclaimer: I’ve never chased donkeys. I have been in a situation where I’ve feared donkeys running me over—that was in Santorini, Greece, which is another story for another article. So, what’s the correlation between rural ministry and chasing donkeys?

The concept of chasing donkeys comes from 1 Samuel 9. From the account in 1 Samuel 9 and 10, I believe there are some lessons we can learn and apply to church leaders and pastors in any contexts—especially rural ones.

Do What I’m Called to Do

The backstory to 1 Samuel 9 is that Israel had demanded a king. Having expressed his disapproval and disappointment for what Israel did, Samuel nevertheless sent everyone home while he allowed the Lord to sort through the resumes.

The narrative then shifts to a wealthy man, Kish, of the tribe of Benjamin. Kish had a son, Saul, who was extremely impressive. No one measured up to Saul. One day, some of Kish’s donkeys had enough and broke loose. Guess who Kish wanted to send to track them down and bring them back? Saul!

Remember Saul’s description? He was extremely impressive. No one was like Saul. I could imagine if I was Saul, I would whine and complain about me having to go. If Kish were my dad, I would have responded, “Send the servant. Send my younger brother. Don’t send me! Chasing donkeys is beneath me.” But Saul didn’t respond that way. He simply heard the call of his father and went.

It’s a fact that well over the majority of churches in America run less than 100 members. Yet, we live in a culture (and Christian subculture) that celebrates big. While there is nothing wrong with having a large and growing ministry, I do believe—to a degree—our Christian subculture over-celebritizes the larger churches and their leaders.

In doing so, this can serve as an unintentional shaming mechanism for pastors and church leaders faithfully serving in smaller churches—or praying about serving in such contexts.

Maybe you’re a pastor or church leader and you have these feelings that what you are doing is beneath you. Maybe you feel like you were made for so much more and have way more capacity than what you are doing. Perhaps there are days you feel your call is too miniscule, or maybe it feels meaningless.

I know that I have certainly been there. But let’s take a cue from Saul and do what we are called to do.

Nothing to Show for It

The story of chasing donkeys continues. Interestingly, Saul and his servant searched tirelessly for these runaway donkeys. They went through four different regions…still no donkeys.

Having been in ministry for almost 20 years, there are seasons where I have felt like I’m spinning my wheels with no forward traction. I know that I have felt this way when I’ve looked at numbers and seen no real growth. I’ve felt this way when I have given deep study to the Word and have preached with all the gumption and passion in the world, only to be told, “That was too long, pastor!”

And I’ve felt this way when serving in a rural context with corn fields surrounding the church.

God at Work behind the Scenes

When Saul and the servant arrived at the intersection of nothing-to-show-for-all-their-energy-spent-searching-for-the-donkeys and Saul was thinking about turning around and going back home empty-handed, the servant suggested they try one more thing.

For me, it’s quite humorous to read his idea. He suggested they go and enlist the preacher’s (Samuel’s) help.

Off they went to find Samuel with the hopes that he could point them in the right direction of where to find the donkeys.

But little did Saul know that God had met with Samuel and told him that God was “sending” (see 1 Sam. 9:16) a man from Benjamin that he would anoint to become the first king of Israel. Saul believed he was going up to inquire about donkeys, but God was sending him to inherit a kingdom. For many of us, that’s the story of ministry!

Because many of us feel empty-handed and frustrated in ministry, we search for the expert to share insight to help us do ministry better. We want to inquire about where we should go, what books we should read, and what we should do to see greater fruit in our call.

Don’t misunderstand. I’m not saying that enlisting the help of experts and leaders to learn and grow in ministry is bad. On the contrary, it’s good and necessary!

The lesson I’m pointing out from the story of Saul and applying to us today is that while our micro call is chasing donkeys (doing ministry), the macro call of God for us is inheriting his kingdom. In other words, the narrative of our ministry is embedded in a greater narrative of God’s kingdom.

In short, God works behind the scenes of ministry to prep us for the inheritance of his kingdom.

Dear pastor and church leader, ministry isn’t the telos; it is a responsibility handed to us as we journey towards our ultimate destiny, our ultimate aim—to be heirs with Jesus in the kingdom of God. And from the biblical perspective—having received a glimpse of how God thinks and works—regardless of how insignificant or small we think our ministry is, it is the kingdom telos that keeps us chasing donkeys.

Does God Care about the Donkeys?

In the narrative, we see the answer to this question is an emphatic “Yes!” Before Saul could utter a word about the donkeys, Samuel says, “As for the donkeys that wandered away from you three days ago, don’t worry about them because they’ve been found” (1 Sam. 9:20).

While Saul was busy chasing donkeys, God was watching over and leading them.

There will certainly be seasons where ministry is dry and we feel as though we are spinning our wheels, going nowhere. However, that doesn’t mean that God is not doing something with our ministry.

The Apostle Paul was the one who said that he planted, Apollos watered, but that God gave the growth (1 Cor. 3:6). In planting, Paul wouldn’t have witnessed much movement. In watering, Apollos would have seen little movement. But God saw the greatest movement as he was sovereign over the growth.

Our role in our call from God is faithfulness. God’s role in his call to us is fruitfulness.

Knowing that God cares about our ministries (our donkeys), regardless of the size or scope, we can faithfully set out to chase them, knowing ultimately that our chasing them is leading us in the direction of his kingdom.

In closing, to all my brothers and sisters in ministry—especially in rural contexts—keep chasing donkeys!