Send Institute
The Send Institute is a think tank for evangelism and church planting in North America. It is a partnership of the Wheaton College Billy Graham Center and the North American Mission Board. Read more from this column.
September 12, 2019Send Institute

We are witnessing the de-Europeanization of American Christianity.
Daniel Yang 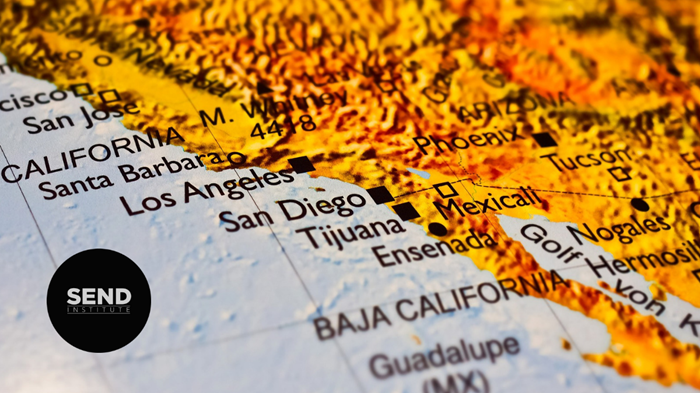 Image: Pixabay/MichaelGaida
Earlier this year, the Send Institute at the Billy Graham Center commissioned a study on Hispanic Church Planting. It was a joint sponsored project between 12 denominations with an advisory team of 8 Hispanic church planting leaders. Members of the Church Planting Leadership Fellowship provided lists of new Hispanic church works, and LifeWay Research fielded the study.

In this article, Send Institute Director Daniel Yang provides an overview of what church planting organizations can learn from the survey. Following this, we’ll be releasing a series of articles written by Hispanic leaders from multiple denominations and networks reflecting on the results of the study and on what they’re seeing in church planting among Hispanic Americans. On October 16th, we’ll host a webinar, ‘Church Planting and The Next Generation of Hispanic Americans’ with Dr. Elizabeth Rios from Plant4Harvest and Rev. David Ramos from Redeemer City to City. More to come on that.

I live in Aurora, IL, located 40 miles west of Chicago, where the population hovers around 200,000 people. SmartAsset recently named it 2019’s Best City for Living the American Dream, where rankings are based on home-buying and the economic mobility of residents.[i]

So then it should come as no shock that Aurora has a high concentration of immigrants, where 42 percent of residents are Hispanic or Latino. In Aurora and other cities all across North America, the “Americanization” of immigrant communities, particularly Hispanic, has created tremendous opportunity not just for personal economic advancement, but also for greater kingdom advancement.

On July 23, 2019, the results from the Hispanic Church Planting Research were released at the Church Planting Leadership Fellowship. The project was commissioned by the Send Institute through a partnership of multiple denominations—with LifeWay Research fielding the survey—to better understand the state of new churches started by or started for Hispanic Americans.

The vast majority of those who participated in the survey (offered in both Spanish and English) were Hispanic immigrant pastors and church planters.

Christianity Today covered the preliminary findings in their article, Latino Immigrants Are Evangelizing America. However, the title of LifeWay Research’s press release captures succinctly the primary finding: New Hispanic Churches Often Do More With Less. The major reveal was this:

Scott McConnell, Executive Director of LifeWay Research, says it this way, “Though new Hispanic church works start out smaller, they are more evangelistically effective per person.” Other research in the past suggests that the major factors contributing to the growth of Hispanic American evangelicals include the influence of Pentecostal Christianity, the shift away from Catholicism, and the church’s role in the assimilation process of immigrants.[ii]

Earlier this year, our council of missiologists released a Church Planting Manifesto for 21st Century North Americaendorsed by over a hundred church planting leaders including Tim Keller (Redeemer City to City), Anita Easlack (The Wesleyan Church), Mike McDaniel (Summit Network) Bener Agtarap (Path1/UMC), and Graham Singh (Church Planting Canada), among others. Rooted in missiological principles, the manifesto looks at the reality of the North American landscape and calls leaders and organizations to work together for the future towards greater collaboration and innovation in church planting.

The last of the twelve manifesto principles states:

Men and women leading in mission—from different racial, ethnic, and socioeconomic backgrounds—is a demonstration of the power of the gospel.

The statement further elaborates affirming that,

God has sovereignly allowed high levels of diversity to descend upon North America as part of his plan to raise up new disciples and new churches...just as the Church from around the world often understands that the Great Commission is all peoples reaching all places with all of the gospel, North America, as a microcosm of the world, requires a mission force led by diverse and culturally intelligent leaders.

The Hispanic Church Planting Research gives quantitative support to this principle. It shows that immigrant communities have become well-acquainted and adapted to American church planting models and practices as evidenced by the viability and evangelistic effectiveness of these churches.

Today, these communities are an inseparable part of American church planting, which means their generational influence will irreversibly become integral to the future of American Christianity. This also means that there needs to be an evolution in American models and practices to properly account for and address the issues raised in this research.

By seriously taking into consideration the evangelistic efficiency of new Hispanic churches and their leadership influence, we can better examine and improve our church planting systems and processes to become more equitable, empowering, and missionally effective.

In thinking about the current American landscape, I want to offer four major implications deduced from the research to help church planting leaders better prepare for the future that, really, has already descended upon us:

Denominations such as the Southern Baptist Convention and the Assemblies of God consistently report that much of the growth in their church planting comes from non-Anglo churches, with a large number of them being planted by Hispanics and among Hispanic communities.

While at times the influence of Hispanic leadership does not seem as pervasive as it should be and their voices can feel neglected, there’s a greater realization and acceptance that “Hispanic” ministry cannot be relegated to a secondary emphasis in an organization’s church planting strategy.

While it’s important to maintain cultural sensitivity towards immigrant church planters and to equip them according to their cultural needs, many organizations are softening and blurring the once hardline border between “ethnic” ministry and “mainstream” ministry.

Some church planting groups are intentionally building for the future with significant Hispanic leaders helping to lead the broader movement.

2. Church planting training and support should be implemented with cultural intelligence and sensitivity.

Some groups are overcoming these obstacles by developing Spanish-speaking training and environments housed in Hispanic churches.

I write about this in-depth in a long-form article called Welcoming the Arrival Church Planter: Preparing Immigrant Church Planters for North American Training, where I survey the literature of cross-cultural training and apply some of its strategies to American church planting training.

3. Family-oriented models of church are not going away.

Fifty-two percent say the family model most strongly influenced their church planting approach. This is the largest influential factor among all models. While it’s convenient to attribute this to the dynamics of first-generation immigration and assimilation where newcomers see the local church as an extension of their family, the family-oriented model cannot be dismissed easily even among American-born Hispanics.

While it is not uncommon that some second-generation Hispanics leave their immigrant family-oriented churches to experience “more American” or even “White” churches, the vast majority stay, and even those who leave often return.

In his book, A Future for the Latino Church, Dr. Daniel Rodriguez provides extensive research on effective churches and church plant models that are multilingual and multigenerational. Rodriguez even refers to American born Hispanics as “modern-day Hellenistic Jews” saying, “My research during the past five years has convinced me that a modern-day parallel to the episode described in Acts 6:1-7 is being played out in barrios in Chicago, Dallas/Fort Worth, Los Angeles, Miami, New York, Philadelphia and San Antonio.”[v]

And while many in this generation prefer English to Spanish, ethnic identity and belonging is still integral to their spiritual formation.

4. It is mission-critical to rightlyand righteouslyfund ,valuing new immigrant works along with well-established works.

Some see Hispanic church plants “doing more with less” as largely positive and a good example for mainstream American church planting. Others see it as a great inequity where organizations are funding Hispanic church plants, on average, at a much lower rate than others. Still, others see this as furthering the narrative of a “poverty” mindset where some congregations do not want to financially support their pastors full-time or even part-time.

Just as in Acts 15 where the Council in Jerusalem had to grasp that Gentile churches were equally faithful and equally valid as their churches in Jerusalem, denominations and networks must see immigrant church plants as valuable and dignified works, equal to any other well-established work.

Unjust structures are incrementally and sometimes unintentionally built over time. This means that ongoing evaluation needs to happen regularly to ensure that structures, systems, and strategies continue to serve people and not the other way around.[vi]

The Next Generation of American Church Planting

It is undeniable that God is at work through Hispanic leaders and churches in America. The Hispanic Church Planting Research is important in showing that new Hispanic churches are simultaneously bolstering and challenging American church planting. Each week, more of these churches are being added.

Their influence surpasses Hispanic people and the local communities in which they serve. And while the research largely reflects the experience of immigrant church planters, we know that across all of North America, many Hispanic pastors and leaders, who once grew up in churches similar to these, now lead new churches that aren’t just predominantly Hispanic but are effectively reaching people from all kinds of backgrounds.[vii]

We should only expect more of this to happen as Hispanic immigrants continue to evangelize America. And it should not necessarily be our desire that new Hispanic churches do more with less, but that they would do more with greater recognition and support from the denominations and networks they find themselves a part of.

Join the Send Institute and the Billy Graham Center for a webinar on Wednesday, October 16, 2019, at 11:00am CST for Church Planting and The Next Generation of Hispanic Americans with Dr. Elizabeth Rios (Plant4Harvest) and Rev. David Ramos (Redeemer City to City. They will be discussing ministry implications from the Hispanic Church Planting Research as well as what church planting and ministry looks like among the next generation of Hispanic Americans.

[iv]I conducted an interview with Charles Ridley on February 7, 2018 and he was very open about this to me.

[vi]See the tenth principle in the church planting manifesto. It states: Regular and ongoing evaluation of mission strategies, structures, and systems is necessary for contextually-appropriate methods and models. https://www.sendinstitute.org/manifesto