Lausanne
Lausanne North America (L-NA) is committed to extending the influence and passion of Lausanne Movement by connecting influencers and ideas on mission and evangelism for Christ and His Kingdom. Read more from this column.
September 6, 2019Lausanne 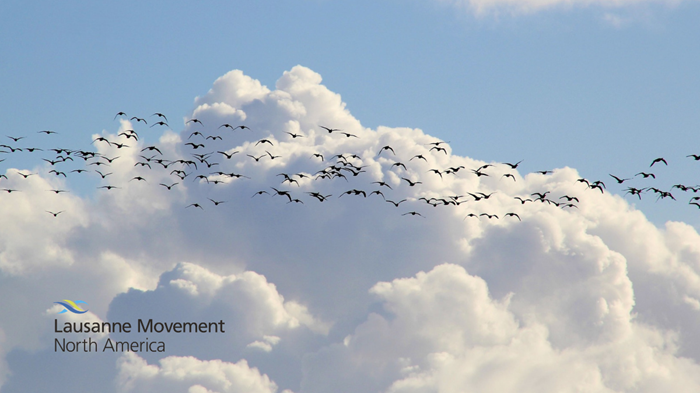 Ever since Adam and Eve got the boot out of the Garden of Eden, humanity has—whether we realize it or not—been on the move in search of a better land.

Today, migration is one of the great global trends that reminds us that we are all migrants. Mohsin Hamid, writing in National Geographic, expresses, “All of us are descended from migrants. . . . None of us is a native of the place we call home.”

The World Health Organization reports that more people are on the move now than ever before. In fact, there are an estimated one billion migrants in the world—1 in 7 people—763 million internal migrants and 258 million international migrants.

As the world is on the move, the church must be on mission. Believing this, Lausanne North America and the Billy Graham Center have launched a North America Diaspora Strategy Group led by Dr. Sadiri Joy Tira, Catalyst for Diasporas for Lausanne Movement.

Comprised of scholars, pastors, and practitioners, this group met a little over a week ago to outline their goals for the next two years for how they will help bring awareness and understanding to the church in North America as well as how they can help encourage, equip, and empower the church to engage diaspora peoples who enter our North American cities and communities.

Over the next six months, this group will be working on resources to share with the church in North America. But, while we wait for the release of resources, I want to offer up three takeaways from my time with them.

Takeaway #1: God is sovereign over migration.

I know some may have a difficult time with me reducing the complexity of migration down to a simple theological statement. There’s no denying that migration is a hot-button issue today that tends to incite political and even national division rather than unity. But for the church of the living God, the migration issue is first and foremost a theological issue before it is a political one.

Because of the sensitivity of this topic, I know that statement alone may elicit pushback.

But don’t misunderstand. I’m not saying that it isn’t a political issue. I believe Christians should be part of the conversation helping think through policies and processes that seek to bring order to a people and a nation as well as human flourishing for all.

My aim here is to encourage Christians to orient their thinking to begin with the theological. As such, Christians would understand migration as a sovereign act of God. Throughout history, God has been the Sovereign King over creation and humanity, orchestrating the [involuntary and voluntary] movements of people.

The Apostle Paul summarizes God’s sovereignty over the nations this way: “[God] made from one man every nation of mankind to live on all the face of the earth, having determined allotted periods and the boundaries of their dwelling place…” (Acts 17:26).

Why is God sovereign over the migration patterns of people? Paul goes on to answer this question as he teaches among the Areopagus. He expresses, “…that they should seek God, and perhaps feel their way toward him and find him” (Acts 17:27).

In other words, the movements of people have been sovereignly orchestrated by God in order that he might make himself found and known. Therefore, while migration may be a complex national and political issue, I believe migration is a theological and missional issue as God sovereignly sends foreign missionaries or uses his indigenous missionaries to make himself known.

Our actions reflect our ultimate allegiance. In other words, we behave in a manner which reflects what we ascribe ultimate worth to. To put it one more way, we image what we truly worship.

What does this have to do with the way the church would receive the foreigner? Everything! Theologically, as believers we know that God didn’t ignore the foreigner—the Gentile—but intentionally pursued them.

We know that God welcomes the stranger with loving hospitality instead of indignant hostility. We know that God stripped away the excess of religiosity to pave the way for the foreigner to enter into relationship. We know that God is not exclusive—bound to a certain people or locale—but inclusive.

If God is all the above and more, and we are his people—part of his kingdom—then we should pattern our lives accordingly towards those we would consider a foreigner, a stranger, an outsider.

Today, in many of our American and Canadian cities and communities, there are refugees and immigrants who have left everything for the hope of securing something of a better life. My hope and prayer, along with the North America Diaspora Strategy Group’s prayer, is for the church to be on the front lines welcoming and receiving the refugees and immigrants that enter our cities and communities.

May our churches seek contextual ways to be the hands and feet of Jesus—whether it means providing transportation, furnishing homes, sharing a meal, or establishing worship services in their language.

While we want to be good citizens of our temporary nation, we want to be even greater citizens of the kingdom to come. Therefore, may our behavior toward the foreigner give them a great indication of how our God sees and loves them.

Takeaway #3: The great migration attunes our hearts and lives to the theological reality that we too are migrants longing for a better world.

As I noted earlier, Adam and Eve got the boot out of the Garden of Eden. Their exodus from the garden was completely justified as they sinned and rebelled against God. The garden was their home; God created it for them. But ever since the day they were forced out of the garden, humanity has been on the move, wandering and searching for their home.

The great migration today should remind all of humanity, especially believers, that we are all migrants searching for a better land, searching for home. As Christians, we believe that the story of our homeland began in the garden but ends in a city, the New Jerusalem—a city where there is no more pain, suffering, or death.

The New Jerusalem is our true home. In the meantime, we are exiles, strangers, foreigners, and resident aliens where we live—regardless of our status in the land. Therefore, while we are all on the move, we should be a church on mission serving as ambassadors of the unshakeable kingdom where our true citizenship lies.

While these were some of my takeaways after spending time with these scholars, experts, and practitioners within the diaspora conversation, I’m excited about the resources that will be emerging from this group.

In Search of a Better Land: A World on the Move ...