“The move of God becomes a movement.”
Ed Stetzer 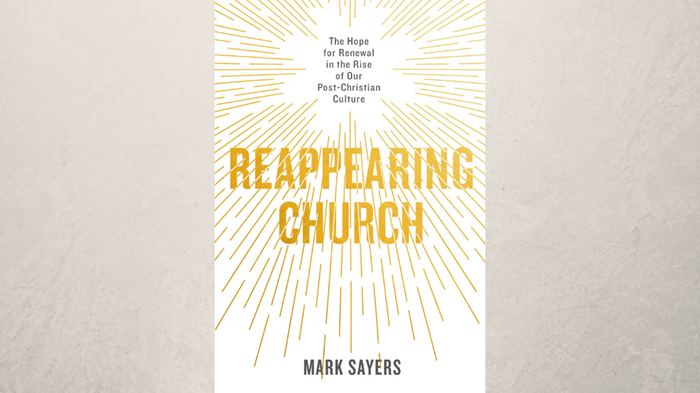 Image: Pixabay/Moody Publishers
Today I am glad to welcome Mark Sayers to The Exchange. Mark is the senior leader of Red Church in Melbourne, Australia, and the co-host of the podcast, This Cultural Moment.Here we talk about his new book, Reappearing Church: The Hope for Renewal in the Rise of Our Post-Christian Culture.

Ed: Why do you think the church needs the message of this book right now?

Mark: In every age, the church needs renewing. There is a process of renewal and decline which we can see at play throughout history. It begins as God in his grace moves. Those open to his leading and humble enough to follow, respond.

The move of God becomes a movement.

However, over time, abiding is replaced by striving, we try and keep the movement going, turning it into a machine which runs on human power rather than divine favor. Eventually the machine becomes ineffective, existing as a rusting monument to a past move.

This pattern of renewal and decline occurs at a new pace in our day. Our globalized, technologically-boosted world has not just compressed space, but also time. News cycles that once ran over a week now last 24 hours—information speeds across the world in millisecond.

This dynamic means that the slow cycle of spiritual renewal, maintenance, and decline, which in the past played out over generations, now occurs at hyper speed.

The tools of our time enable us to reach across both distances and difficulties. Yet the sword cuts both ways, enabling us to boost the mythology of our own human power, offering us the ability to expand our platform, reach, and influence beyond God given boundaries.

Those used by God in the past were far more aware of their inadequacies; their limitations were in clearer view, and thus the raw material of renewal – humility – was more easily discovered and mined by God.

Yet humility and a realization of our hopelessness without God is a scarcer resource today. This means today that not only can the rot set in quicker, but in our age of the image, it can be missed because we can apply a sun-drenched filer over our failings.

Ed: What are the gifts and blessings that lay hidden in our post-Christian culture?

Mark: The great challenge to Christianity in the West is secularism. Yet it is easy to forget that the ideology of secularism, and the possibility of a life without God and deeper meaning can only exist as a lived reality when buttressed by a set of political, social and economic securities being in place—securities which are currently weakening.

After the Berlin wall fell, the West, and in particular the English-speaking West, became possessed by a kind of euphoria, in which the opinion of the day believed that we were irreversibly gliding towards an inevitable pleasant utopia of freedom.

The polarization of politics can hide the way in which both the left and right bought into this myth; for while each side of politics prescribed their own route to the top of the mountain, the summit for both was a society of radical individuals shorn of limitations.

For a period, this myth could be maintained. The connectivity and potential of the internet, the promises of globalization, the cornucopia of goodies offered by consumer society could distract us from the fact that the emperor had forgotten to pack his trousers. Yet, eventually the myth began to suffer its inevitable mugging.

A series of shocks, the war on terror, the global financial crisis, environmental challenges, rising inequality, the persistence of discrimination, all illustrated that history wasn’t over.

The connectivity of globalization and the internet brought us closer, but it also brought more chaos and more conflict. The freedom that was promised now came like a flood, paralyzing us with endless choice.

Unlimited freedom ironically brought the imprisonment of constant anxiety. We had more freedom than we knew what to do with, but at the same time our levels of meaning were dangerously low. Our idol had been exposed. Our post-Christian, post-everything society no longer looked in rude and seductive health, but rather it appeared anemic, irritated and lost.

Missionaries, facing seemingly impenetrable cultures learn to look for the gaps between idols. The gap between Post-Christianity’s idols was widening. An opportunity was arising.

It has been said that empires fall when their promise doesn’t live up to the reality of what is delivered, and this is increasingly post-Christianity’s problem. Yet it is an opportunity for those hungry for renewal.

Delivered a diet low on meaning, many again turn to the secular religions of politics, tribalism, and ideology. Yet some will again look upward, crying out for God to move. This has happened throughout history, when society buckles under pressure, when myths are exposed, empire totter, technology upends, globalization moves us beyond what is known – this is when renewals, awakenings and revivals occur.

Ed: What cultural patterns need to be interrupted in order for renewal to happen?

Mark: Every renewal disrupts current cultural patterns in order to bring new life, freeing us from those things which work against the flourishing of God’s work in the world. Our’s is an age of disruption, of fragmentation and breakdown. This is most apparent in our inner worlds.

All corporate renewals begin with personal renewals. Personal renewals occur when women and men of God come to the end of themselves. Their discontent begins to solidify into a desire to live in a new way.

Humble, holy, and hungry patterns of life emerge, in which we again become supple clay in the hands of the potter. Those simple yet fecund patterns, that have always created saints out of ordinary folks; prayer, Scripture meeting spirit, serving of the poor, heart-felt contending for God to again move, are rediscovered.

Our culture of disruption needs disrupting; Isaiah’s ancient call to rebuild the ruins must begin in our debris of our fragmented selves. Revival first begins in miniature; secularism is reversed with acts of personal desecularizing.

Ed: What does it look like to create a renewal cell?

Mark: God will lead those undergoing personal renewal to others who are tasting the same fruit. Notes are compared, hopes shared, victories celebrated, redemptive patterns collated. A renewal cell is birthed, which operates as what Luther called a church within the church, a healing white blood cell within an ailing system.

Eventually, renewal cells become remnants, hardening in solidity and power as cultural Christianity melts away. The remnant becomes a hot center of renewal, a container emptied of agendas and flesh, with space for God’s renewing spirit to move.

Out of such remnants, renewals burst. Cultural Christianity may melt away, things often have to get smaller before they can again get big. Under the winter soil, the sprouts of spring are ready to break through the surface. Are we ready?