Jesus' command to "Let what you say be simply ‘Yes’ or ‘No’" has major implications for a family unit.
Jeff Christopherson 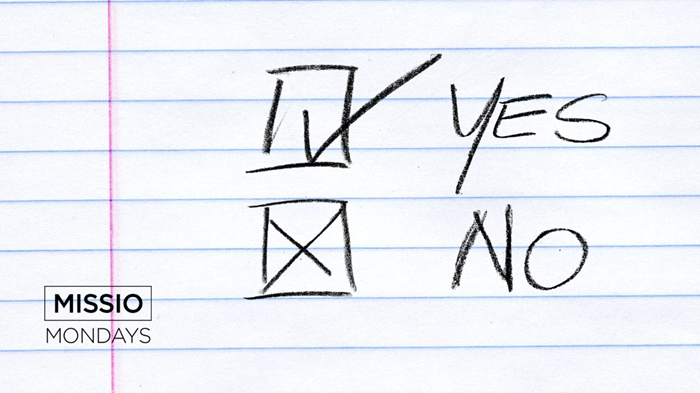 Can parenting be missional? In the current environment of secularity within North America, where all belief systems compete for adoption (including secularism), the Christian faith has distinct advantages.

Much like the day of Elijah calling down fire as visible proof of the superiority of his God, the climate of secularity demands a new apologetic—one that moves from the theoretical to the actual.

Few today seem to be asking the questions of modernity, that is, “What is truth?”

Today’s apologetic in many respects is far more practical: “What works?” “What will help keep my family whole?” And, “Where can I see truth?”

And it is in the real-world answering of these questions that Jesus-followers corner the market.

And none more than Christ-following parents.

For a family, the Kingdom of God is often revealed through the faithful way that parents shepherd their children. It looks much different than the world’s shifting ideas that change from generation to generation. The kingdom effect is both universal and eternal. And, this difference is far greater than a weekly polishing up and shuttling of children to church.

It is a difference of kingdom allegiance.

This year, I am preaching through Jesus’ Sermon on the Mount (Matt. 5-7) in order to help our church family understand the counter-cultural way that kingdom citizens live. In Matthew 5:37, Jesus states in bold red letters, “Let what you say be simply ‘Yes’ or ‘No’; anything more than this comes from evil.”

To Christ-following parents, the applications are entirely counter-cultural, and it is in the applying of Jesus’ words that we have the opportunity to show the world how well a family works when Jesus gets his way.

Here are six implications of Jesus’ teachings for the benefit of thriving missionary families:

“Eat your chicken, Johnny.” “I don’t like this chicken.” “Ok, eat three bites of chicken.” “I hate it!” “We don’t say hate Johnny. All right, eat one bite of chicken and your carrots.” “The carrots are too gushy.” “Ok, if you eat half your carrots, you can have a Go-Gurt.” “Can I eat it on the Paw Patrol plate?” “It’s in the dishwasher, Johnny.” (Insert shriek.) “Ok, let me quickly wash it.”

A parent’s job is to command the troops, not negotiate toward a cease-fire. Every time that parents negotiate down, they may avoid a short-term skirmish, but their authority has been reduced. ‘Yes’ and ‘No’ are the tools that we have been given to properly maintain the order God has established for the family.

The plastic Paw-Patrol plate and Go-Gurt negotiation may seem innocuous enough, but the exchange is actually quite destructive. ‘Yes’ and ‘No’ have lost their weight, and the seat of leadership has shifted squarely to the highchair. The lesson learned is that ignoring directives places you in a better bargaining position for an upgraded deal.

Lesson learned. Behavior reinforced. Now fully prepared for the next battle of the wills.

Jesus’ teaching of ‘Yes’ and ‘No’ has two intended effects; one for the hearer of our words, the other for their issuer. In both cases, a muddled ‘Yes’ or ‘No’ always compromises the integrity of the relationship.

So, Johnny won the battle of the wills. As undisputed king of the castle, he now occupies a throne for which he is entirely ill-equipped. A tiny monarch ruling the family kingdom with only a rubberized spoon as scepter. But, what did he win? And, did he really win?

Until next week, when mom and dad’s busy schedule didn’t include time for protracted compromises. Now what do ‘yes’ and ‘no’ mean? Where are the battle lines drawn? So, Johnny insecurely pushes his power, looking for its limits. The unpredictability of the ‘Yes’ and ‘No’ creates an atmosphere of insecurity for Johnny.

His fallen nature demands power over surrender, and that nature is both fed and deprived, creating spiritual and emotional insecurity. Maybe he didn’t win.

5. A dependable ‘no’ shapes family trust.

When a child learns that mom’s and dad’s ‘yeses’ and ‘nos’ are not opening salvos to launch the negotiation but are, in fact, fixed and stationary – that child has been blessed with a rare gift.

Johnny may be eating chicken and carrots from his second-favorite plate, but he no longer carries the burden of leadership for his family. His spoon is just a spoon. His highchair is just a highchair. And with no plastic thrones or rubberized scepters, parental leadership is both wanted and unquestioned.

Dependable ‘yeses’ and ‘nos’ are the shapers of family trust. They are the simple tools that create the environment for children to learn to live under authority, and to emulate as future leaders themselves.

Therefore, a parent’s loving ‘yes’ should be both solid and numerous. A Christian home is not a military barracks to exact discipline and order, but a loving sanctuary where little hearts learn to trust in the goodness of God and become themselves a living testimony.

In a broken world where ‘yes’ and ‘no’ mean very little, a counter-cultural family that experiences emotional and spiritual wholeness by living out Jesus’ kingdom instructions becomes a missionary unit by its very nature.

It becomes a light to the world—a missionary light that points the way to Jesus.