Despite the challenges of COVID-19, Calvary Baptist Church has learned how to worship together in New York City
Ed Stetzer 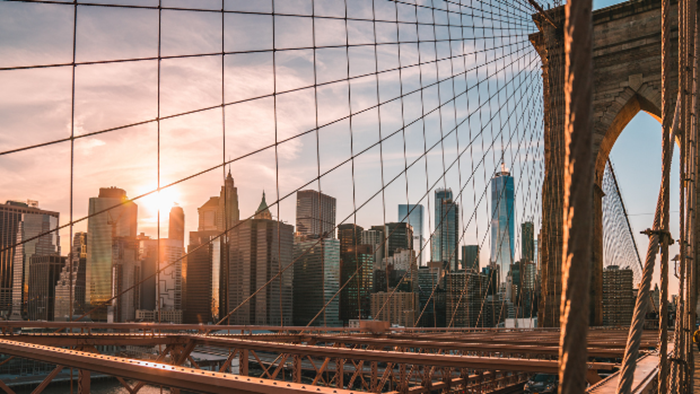 As you may know if you listen to Ed Stetzer Live on Moody Radio, I finished up a lengthy interim at Moody Church this summer. Not long after that, I began an interim at another historic church, Calvary Baptist Church in New York City. There's actually several connections between the Moody Church and Calvary Baptist Church historically and a lot of interchange has come between each through the years.

A church with a rich history 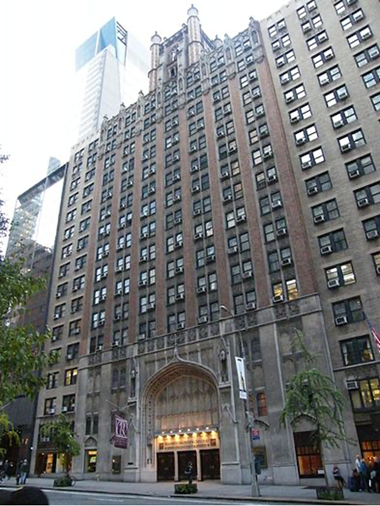 Calvary Baptist Church, like Moody Church, has a rich and varied history. Established in 1847, the church was an early adopter of the medium of radio in the 1920s. For many years in the 20th century the Stephen Olford served as pastor. Presidents Richard Nixon and Bill Clinton worshipped at the church; evangelists Billy Sunday and Billy Graham preached there.

It is what we might call a "skyscraper church," located on W. 57th Street just down the street from Carnegie Hall on what has been called Billionaires Row. The area is currently experiencing a huge new growth spurred from high-rise condos as well.

Calvary Baptist has been without a pastor since David Epstein retired in 2018. Guest speakers have filled the pulpit in the time following his retirement. However, since March they church stopped meeting publicly and did not meet face-to-face again until we gathered together on November 1. (We are planning to meet again on December 20.)

This spring, New York City was hit harder than almost any place in the world by the coronavirus. Thus, the meeting rules in New York City are very stringent. In fact, the city recently made national news regarding some of these rules. We recently posted an article here from John Inazu expressing his agreement with the Supreme Court's ruling regarding New York City's overreach on their rules with which I agree as well.

In this article I wanted to share with you a glimpse of the kinds of experiences churches have had before and during the coronavirus in New York City.

A church without a home 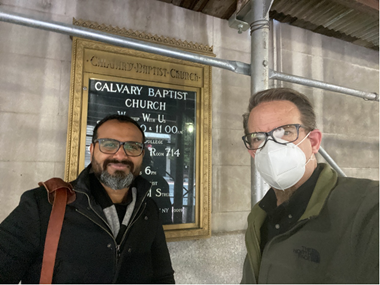 First, it's interesting that Calvary Baptist does not have access to the building where she has meet since the early 1930s. From the original building pictured above's start the Salisbury Hotel and the Church both used the space. In early 2020, a portion of the building was sold so that it could be demolished to complete a new building which will also include a larger space for the church. But for now, Calvary Baptist had to reemerge for any public gatherings somewhere else.

I was able to walk by the building with Dr. A.R. Javed, the missions and outreach pastor.

A Missions Conference in a Pandemic: We Don't Pause the Mission

In addition to serving as interim pastor, I came on this visit and speak at for their missions conference.

Doing a missions conference in the middle of a pandemic in New York City has a totally different feel. But the moment we're in does not pause the mission we're on. Calvary Baptist found creative ways both to follow the protocols and to hold the conference.

For instance, they stationed missionaries in Central Park where rotating groups of people could go up and hear stories of their work. Here's a picture of one of those stations just a few blocks from where the church would be gathering. 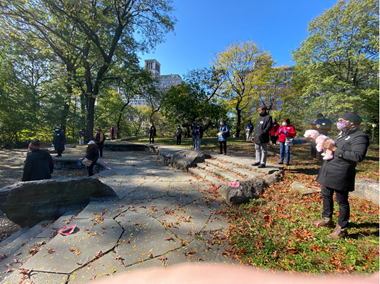 Gathering in the park.

On Sunday, we gathered at Hunter College. As I mentioned this was the first time the church had gathered since the pandemic hit. You may recognize Hunter College as a place where Redeemer Presbyterian met for a considerable time. Here you can see in the signage pointing to the college. 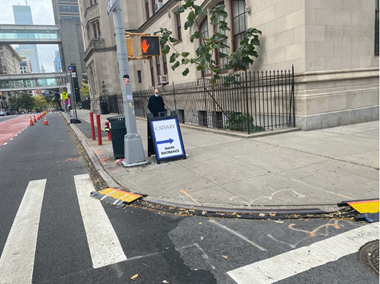 In this day and age, gathering in New York City requires a huge amount of effort. For example, as everyone entered the building, they had to give their name and their contact information. They would read the rules about staying 6 feet apart and more. The information was collected so that everyone could be traced in the event a coronavirus outbreak occurred. 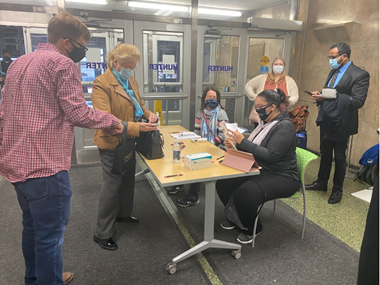 Together for the first time in over half a year 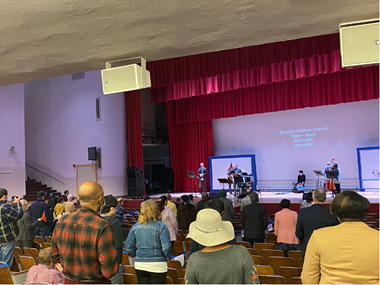 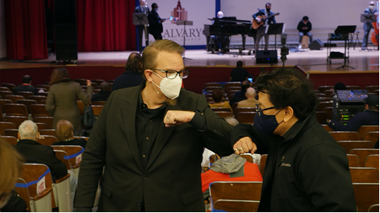 We met together and prayed before beginning asking for God's guidance as we went forward for the first time at Hunter College. It was great to see the enthusiasm of those who gathered. Of course, New York City has been so hard-hit people are not rushing back to large gathering spaces, but you could sense the depth of gratitude and worship of the people who gathered together. Family units sat together and everyone else was spaced six feet apart. I had the privilege of meeting some of the church members. We greeted with the obligatory elbow bump.

At Calvary Baptist Church we're planning on meeting together again in December and perhaps to move to monthly meetings after that. We are looking forward to the time when we can be meeting weekly again.

Pray for this church and all the churches seeking to minister in spaces like New York City in this season we're in.

I should mention that they are pursuing a new pastor. I’ve committed to serve as an interim, and part of being an interim is praying for a new pastor. If you were interested, you can submit your information here.