On the Passing of James Leo Garrett Jr., “The Last of the Gentlemen Theologians” 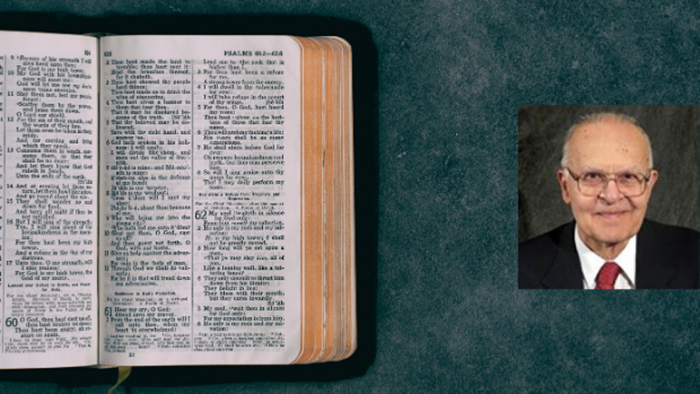 Numerous tributes and expressions of grief appeared on social media yesterday as we awoke to the news that Baptist theologian James Leo Garrett Jr. had passed away in the night.

Students and colleagues mourned and reminisced about the unique and impactful character and work of this beloved scholar and churchman. Malcolm Yarnell, Research Professor of Systematic Theology at Southwestern Baptist Theological Seminary, referred to Dr. Garrett yesterday as “the last of the gentlemen theologians,” a phrase he has used many times to describe him.

Paul Basden also used that interesting term of Dr. Garrett in Baptist Theologians, stating, “I predict that future generations will regard him as a ‘gentleman theologian.’” While many may see this phrase as generalized reference to Dr. Garrett’s irenic spirit, it is actually more of a technical term.

The idea of “the gentlemen theologians” was proposed in 1978 by historian E. Brooks Holifield who used the term to refer to southern theologians in the late-18th to mid-19th century who, unlike the common stereotype of southern ministers and theologians of this time, eschewed mere emotionalism and playing to the ecclesial gallery and, instead, were marked by both gentility and rationality.

In other words, the “gentlemen theologians” were committed churchmen of deep faith who exhibited great scholarly care in their approach to the theological task and offered strong but irenic defenses of orthodox theology and belief. They were respected and their ministries and scholarship were robust and marked by integrity.

In light of this, it is difficult indeed to deny the title “gentleman theologian” to James Leo Garrett Jr. He was Distinguished Professor of Theology, Emeritus, at Southwestern Baptist Theological Seminary in Fort Worth, Texas, until his death two night ago.

He was a graduate of Baylor University (BA in English, 1945), Southwestern Seminary (BD, 1948, and ThD, 1954), Princeton Theological Seminary (ThM, 1949), and Harvard University (PhD, 1966). Dr. Garrett is beloved and revered by countless students and faculty members at the institutions at which he taught—Southwestern Seminary (1949–59, 1979–97), Southern Baptist Theological Seminary (1959–73), and Baylor University (1973–79)—as well as by many others who benefited from his scholarship and Christian devotion.

Dr. Garrett was a fascinating mixture of Southern Baptist loyalty and ecumenical fervor.

While perhaps few theologians and churchmen have thought, written, and engaged so carefully with the inner-workings and trajectory of the Southern Baptist Convention, Dr. Garrett was equally active in his engagements with the wider Christian world.

He was very involved in the Baptist World Alliance, for instance, and was, from 1968–1975 part of the Study Commission on Cooperative Christianity, a commission for which he served as chair. He also contributed substantial pieces to BWA publications.

In 1965, Dr. Garrett attended the final session of the Second Vatican Council in Rome as a guest of the Secretariat for Promoting Christian Unity. Furthermore, he engaged Christians of other traditions in substantial ways, as when, for instance, he presented papers before the Ecumenical Patriarchate in Instanbul, Turkey, in 1994 and 1996.

His voluminous writings include his two-volume Systematic Theology (originally published by Eerdmans and currently published by Wipf & Stock), his monumental Baptist Theology: A Four-Century Study (Mercer University Press), and numerous other authored or edited books and articles.

He entered into literary debate with Dr. E. Glenn Hinson in the 1983 publication Are Southern Baptists Evangelicals? (Mercer University Press) and with the other contributors to the volume Perspectives on Church Government (B&H Academic). A projected eight-volume collection entitled The Collected Writings of James Leo Garrett Jr., 1950-2015 is currently underway with three volumes already available.

Dr. Garrett’s greatest legacy will be the many students and colleagues whose lives he impacted and whose ministries he in no small measure shaped. I have heard former students refer to Dr. Garrett as both “Machine Gun Garrett” and “Gatling Gun Garrett” because of his rapid-fire teaching style and the ease with which he disseminated information.

Dr. David Dockery reflected yesterday on his time as one of Dr. Garrett’s students and recalled students wearing t-shirts around campus that read, “I Survived Leo’s-theo”! When I studied under Dr. Garrett near the end of his active teaching career at Southwestern Seminary in 1996, the rapid-fire delivery had perhaps slowed a bit but the encyclopedic knowledge, the direct and, at times, unnerving interaction with his students on specific points and questions of theology, the winsome and kind personality, and the deep and sincere affection Dr. Garrett had for both the subject matter and his students had not abated in the least.

Dr. Garrett was a man of profound erudition and a high commitment to sound and balanced scholarship.

He will also be remembered for his very careful, judicious, and balanced approach. Bart Barber, pastor of First Baptist Church, Farmersville, TX, has spoken of “the James Leo Garrett rule” in theological discourse and debate: “Only when you can state your opponent's position so well that they themselves say, ‘Yes, that's what I believe,’ can you then begin to debate.”

Dr. Garrett was married to his beloved Myrta Ann Latimer Garrett for 67 years before her passing in 2015. He is survived by three sons and a number of grandchildren and great-grandchildren.

I am honored to be a part of the great chorus of students whose lives were touched, altered, and enriched by the life and ministry of James Leo Garrett Jr.

Time will tell if James Leo Garrett Jr. was truly “the last” of the gentlemen theologians, but a gentleman theologian he certainly was.

Wyman Richardson is the pastor of Central Baptist Church in North Little Rock, AR. He is the editor of The Collected Writings of James Leo Garrett Jr., 1950-2015.

On the Passing of James Leo Garrett Jr., “The Last of the Gentlemen Theologians”

On the Passing of James Leo Garrett Jr., “The Last ...