Doing does not result in done. It only leads to more doing.
Ed Stetzer 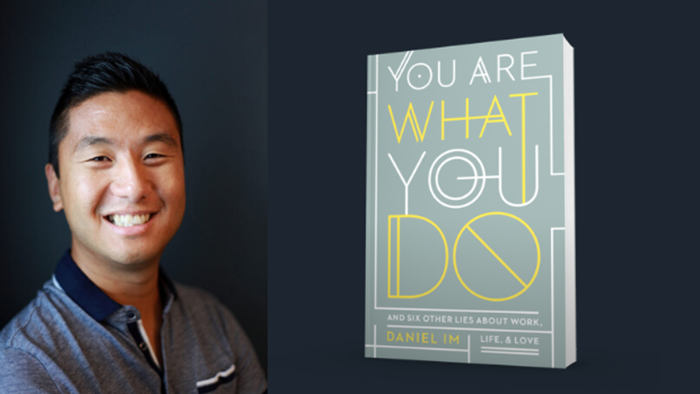 Image: Photo by Daniel Im
Today I am glad to welcome Daniel Im to The Exchange. Daniel is a speaker and leader who has pastored in five major cities around the world in churches ranging from 100 people to 50,000 people. He has written two paradigm-shifting books and his latest is on You Are What You Do: And Six Other Lies about Work, Life, and Love. Below I talk with him about that book.

Ed: Why did you write You Are What You Do?

Daniel: Because our definition of “normal” has changed—seemingly overnight. For example, working a steady nine-to-five job isn’t normal anymore. And waiting until you’re retired to explore the world, try new experiences, eat delicious food, and enjoy life isn’t normal either—if retirement is even a thing anymore.

What’s now “normal” is this desire that we all have for freedom and flexibility, which conveniently is exactly what the gig economy promises.

And contrary to common belief, this is not just something that affects those in their 20s and 30s. According to the research, there are people in every generation who have side hustles because this desire for freedom and flexibility has become our new oxygen.

In You Are What You Do, not only do I show readers how to recognize these everyday lies in their lives—and why it’s sketchy to build their lives upon them—but I also unpack the truth on the other side—the truth that leads to freedom and will move us from surviving to thriving.

Ed: For whom did you write it?

Daniel: For the mom who’s rediscovering herself as her children are growing older. For the dad who’s wrestling through the tension of being present for his children, while also trying to make ends meet and provide for his family.

For the student who is not convinced that a traditional nine-to-five job is right for them. For the individual who wants clarity around their purpose and identity, since there’s such cultural confusion about who we are and where our worth comes from. And for anyone and everyone who is tired of the hustle, grind, and go of life and wants to experience something different.

Ed: List and describe the seven lies we believe that you highlight in the book.

1) You are what you do: As children, we’re asked what we want to do when we grow up. As adults, we’re asked what we do for work. And at the end of our lives, we’re measured by what we’ve done. It’s not surprising, then, that we believe the lie that we are what we do. But there’s no end to a life of doing. Doing does not result in done. It only leads to more doing. In fact, there is no badge of honor in a life of doing—only exhaustion and despair.

2) You are what you experience: Experiences have become the new currency. Amassing stuff and getting things aren’t as valuable anymore. And even when we buy those new things, we’re often buying them for the experiences that they'll help create. The problem is that experiences are temporary, and a life driven to get more, do more and have more experiences will only lead you further down a path that you might already be familiar with—a life of comparison that’s filled with jealousy and envy.

3) You are who you know: This lie that you are who you know is so deceptive. On the surface, while smartphones and the Internet appear to be increasing our connection with one another, they’re actually doing the very opposite. They’re exacerbating the problems of disconnection, isolation, and loneliness. The fact is, we are more disconnected than ever before. And a life built on this lie doesn’t lead to the thing it promises: greater levels of meaningful connection with others. Ironically, it actually produces the exact opposite: isolation.

4) You are what you know: Knowledge has the power to shape and form our identities, which is precisely why Thomas Jefferson wanted to freely promote knowledge, while the dictators Hitler and Pol Pot wanted to control and restrict it. And while knowledge is definitely valuable, the pursuit of knowledge—over and above everything else—doesn’t ever satisfy. You’ll inevitably meet someone who knows more than you, and it’ll take a lifetime to catch up to them. Or, you’ll be working for someone who doesn’t even know half of what you know, yet they’re making double your salary.

5) You are what you own: It’s shocking, but the way we spend our money surprisingly reflects what we value, who we think we are, and how we want to appear to others—more than we might be aware of or even be willing to admit. There’s no wonder we believe the lie that we are what we own; our culture has infused status and value into material objects. But when our focus is on the things we own, contentment is as far away as the next undiscovered galaxy in space.

6) You are who you raise: On the surface, believing the lie that you are who you raise doesn’t seem too bad, since involvement in your child’s life is better than neglect. However, underneath the surface, this lie frauds us into believing that our children’s success is our success. And their failure is our failure. But the fact is, no matter what your children accomplish or achieve, it will never satisfy. Nothing they do will ever make you feel whole, fixed, or content. They will never be able to cover up the shame from your past, because you are not who you raise.

7) You are your past: Do you see the past in your present? Do you see how the things that you’ve done, and the things that others have done to you, are still affecting you today? In your everyday life? If the answer is yes, then congratulations! This lie that you are your past has latched onto you as well. Believing in this lie will disable and destroy your future if you find yourself filled with bitterness and unresolved hurt from the past. But the good news is that there’s truth and freedom on the other side.

Ed: Why do you think we are so vulnerable to these lies?

Daniel: Because they don’t present themselves as outright harmful, evil, and unjust lies. Rather, they are half-truths that mingle truth and falsehood with the subtle and deliberate intent to deceive. And in our day and age of fake news where half-truths are everywhere, these don’t actually seem too bad, which is precisely why they are so deceptive. Here are the seven lies reframed as half-truths:

1) What you do for work affects how you see yourself.

2) The things you experience shape your memories and perception of self.

3) The people you know hold the power to shape you.

4) What you know can either open or close doors.

5) The things you own have a level of power over you.

6) You are responsible for your children.

7) The past affects how you see the world and approach it.

They’re incomplete precisely because they’re half-truths. This is why you can’t let any of these lies become the primary lens through which you view yourself, and also why we’re so particularly vulnerable to these lies.

Daniel: The rise of the gig economy has made each of these seven lies so compelling because the gig economy gives us the illusion of control. “You have unlimited earning potential,” says the gig economy, “so if you want to go on a trip, just gig for a few hours. Want that new outfit? Sell a few things. Want the latest phone? Hustle for it. After all, everyone has free time that they waste, so just use that time and earn some extra cash. Be productive! You’re in control, so make it happen—rise and grind and get it done.”

Ed: What do you hope readers glean from the book?

Daniel: That living in chains to the seven lies of the gig economy is tiring. It’s a grind and a hustle just to try and keep up. It’s actually a fool’s game because you will never feel caught up.

While there is definitely a sense of freedom in knowing what and who you are not, ridding yourself of these seven lies won’t fill you—it’ll just empty you. Unless you replace these lies with the truth of who you really are, you’ll just find another set of lies—even stronger and more destructive—to replace these with.

Ed: How will your book make a difference for individual readers, as well as culture as a whole?

Daniel: In our culture today, doing has become a badge of honor. It’s become a status symbol and the way to define ourselves. The same is true with the rest of the lies. Our sense of meaning and significance have become tied to our experiences, our relationships, our knowledge, our stuff, our children and our past. However, the thing with each of these lies is that they all have unintended consequences.

When we actively resist these seven lies and instead pursue the alternative path that I propose in this book—the path of following Jesus—we’ll begin experiencing what true freedom and flexibility feel like, which, ironically, is the very thing that our culture falsely promises through these lies.

This is why Jesus’s invitation into truth and freedom makes so much sense: “Come to me, all of you who are weary and burdened, and I will give you rest. Take up my yoke and learn from me, because I am lowly and humble in heart, and you will find rest for your souls. For my yoke is easy and my burden is light” (Matt. 11:28–30). The path to freedom is through Jesus. The way to discover truth is through Jesus.