While its fashionable among the media to cite outliers who spurn the guidelines for their state, more churches by far are following the model of Calvary Chapel in both caring for their community and honoring those in authority.
Ed Stetzer 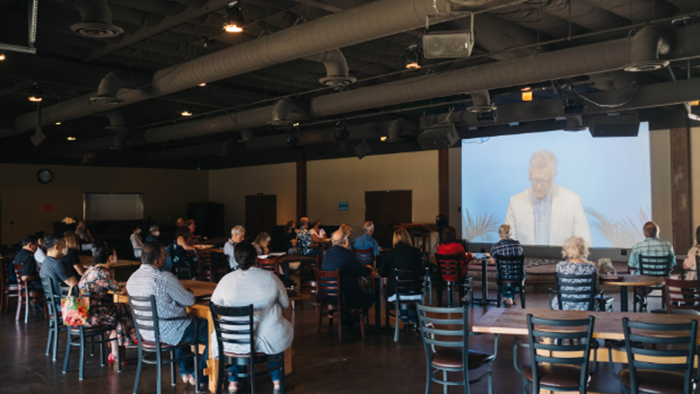 In the wake of the NY Times article which was critical of churches in the ongoing pandemic, I thought it would be helpful to offer examples of churches that are going above and beyond both to minister to their people and communities and to honor the guidelines in their various states.

Many churches have stepped back from meeting even with social distancing guidelines, moving back to online-only services because of the more recent spikes in cases in their state. A prominent example below comes from the particularly thorny circumstances found in California, where cases are setting all sorts of records in the wrong direction.

Calvary Chapel, Costa Mesa, California (CCCM) has gone to extraordinary measures to do just this. CCCM is the mother church of the entire Calvary Chapel movement that has spread the gospel through churches around the globe.

After I spoke Sunday at The Hour of Power, I headed over to Calvary Chapel to see my friend (and a student in our grad program), Brian Broderson. When I saw what they were doing, I asked if I could get some pictures and Thom Walker, from their staff, went around taking some for me.

Now, a few notes before we jump in. First, they followed all the guidelines and even went above and beyond. The guidelines changed this week and they will adjust accordingly, so this is an example from last week and it may help you plan accorordingly. Second, we will see spread through churches— as we have through stores, homes, schools, and more. However, in my view, churches need to work the hardest and plan better than anyone else to show how we love and care for our people. 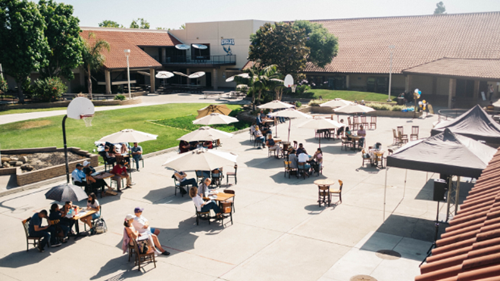 Here was their plan. Executive pastor Jordan Taylor described the church's response (see accompanying pictures). They have a school on their campus with a football field, so they planned to do large outdoor services. However, the state, federal, and local governments were not giving room for this, so they decided to divide the campus into nine zones and spread out—thus following both the letter and spirit of the law, keeping their people safe, and worshipping together. 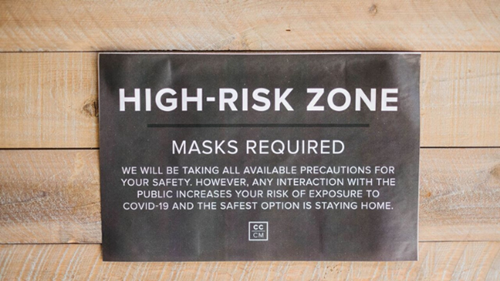 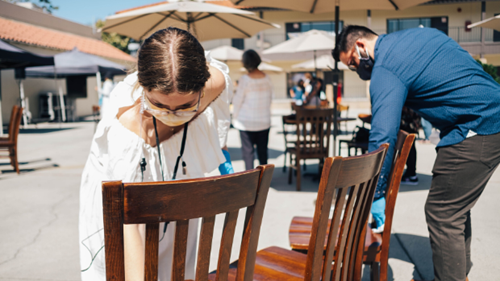 They currently are to host about 600 people per service time, about 250 indoors and 350 outdoors. The 250 are spread between three stations indoors as each space is limited to 100 people. Like many churches across the country, they've found that many people are still hesitant to attend public worship or be out in public.

CCCM also deals with two extremes common in churches during this season of uncertainty: one extreme is angry about masks and don't want to wear them, and another demands that churches require masks. So, one of the zones located near the handicap parking area is designated for those who are at high risk. "We want to show them honor," Taylor said, so this zone requires all people wear masks. Then, the second week of reopening the state required providing masks for all people meeting indoors as well. 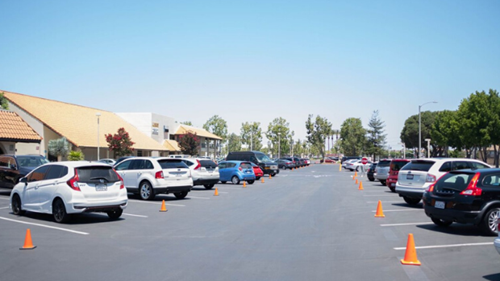 Another feature of their plan is spacing between parking as the photo shows. Why this added distancing detail? This is a unique direction from California to churches that's not required by retail businesses or other venues. "We went back and forth on this because it's not required of anyone else," Taylor observed, adding, "We ultimately knew that people hang out in parking places and people want space, and we knew that we had the space to do this. We're not going to have the issue of people storming down the gates to pack this place out, so we decided to honor people in this small way." 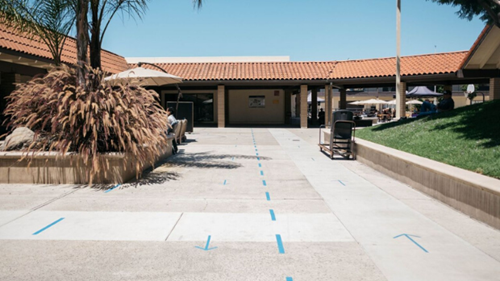 With the campus having a school as well, it allows for plenty of spacing, information tables, and help for reserved seating.

One thing they've learned is that people aren't used to reserving seats for services, so they have a pretty high no-show rate of about 20 percent from seating reservations. They employ reservations in part to help in-house tracing. "We've had people on staff contract COVID-19," Taylor said, "We want to bear the responsibility of being able to contact anyone who has been near an infected person."

Senior pastor Brian Broderson reported that a recent Sunday had 433 registered for the second service and more for the first. He commented on the prohibition of congregational singing in his state:

We are not congregationally singing, because we don't want to spread the virus. We have two staff members who have come down with COVID, and there is definitely a spike in California, so we decided we're going to go with [the no singing approach].

While its fashionable among the media to cite outliers who spurn the guidelines for their state, more churches by far are following the model of Calvary Chapel in both caring for their community and honoring those in authority. 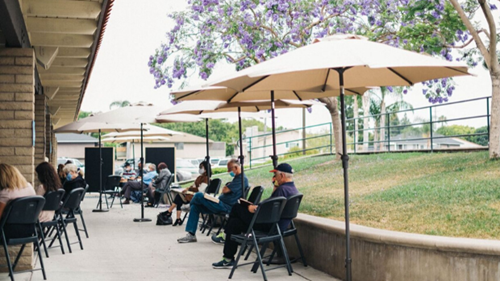