Keep Your Distance: Words of Advice for Churches from the Surgeon General 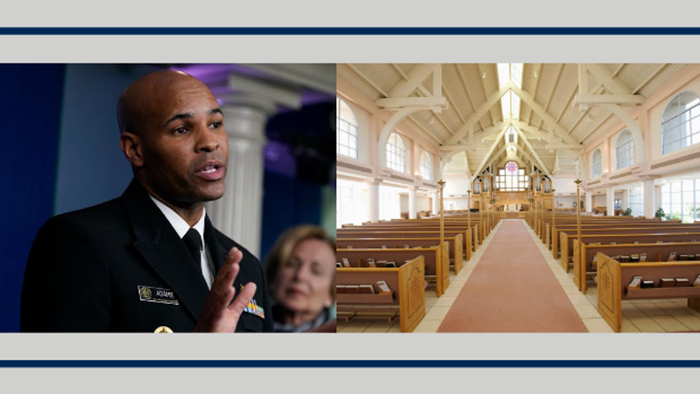 Earlier today, Ed Stetzer and a group of faith leaders meet with Vice Admiral Jerome Adams, M.D., M.P.H., the 20th Surgeon General of the United States. Ed asked about churches gathering and this is printed with the Surgeon General’s permission.

There is a growing pressure from congregations of all faiths to begin to meet… What medical advice would you like us to communicate to churches from you?

Arizona was one of the hardest places in the country. Just three weeks ago, the cases were running out of control. We were able to turn that around by doing the simple public health measures…

So my, my message—if I was talking to your congregants—would be number one, we can turn this thing around in three to four weeks, by doing three simple things:

The hard one is watching your distance, because there's some details in there that are important, and that includes not having large gatherings and no house parties, no going to bars, and avoiding gatherings of more than 10 people and maintaining six feet of distance from others. It sounds simple—but truly that's what we need to do and the reward that you get on the back end, if we do that, we can turn around our rates in three to four weeks, to be able to open schools, to get back to worship.

We need people to understand that when we get the younger people—especially who are our problem folks, not just for COVID, but you know, in an array of different areas, but also our people out there with the most energy and the most ability to spread messages—if we can get them cooperating, then in three to four weeks, we can drive down rates in communities to the point where we can open up places of worship.

Look at New York, literally the hardest place in the world and their positivity rates are now well under 5%, they're in a position where they can open schools and open places of worship back again.

People need to know that if we don't get spread under control, it is not going to be safe to gather once again…

Ed Stetzer:
Part of the challenge is that 70% of churches, according to a Lifeway Research study released a couple of days ago, are actually meeting again already. I know you're not giving directives or mandates, but what medical advice do you want us to articulate to our faith communities?

So, medically, if you are already meeting, I would say number one, make sure you're protecting the vulnerable. Make sure people who are older and people who have chronic medical conditions aren't coming to those meetings or that you give them consideration, because those are the people who are most at risk of dying or having severe complications from COVID-19. You need to protect those folks.

If you are meeting, make sure you do it in a socially distanced manner, at least six feet and encourage people when they're around other folks who aren't in their household to wear a mask. If you are meeting, understand that this virus likes to spread person to person. The closer we are to one another, the more likely it is to spread. The further away we are, the less likely it is to spread. The more barriers we have in between—and a mask is a barrier that prevents those droplets from coming out when we're talking or singing or coughing—the barriers we have prevent spread from the virus.

The final thing to tell those folks is—if you want to open and stay open—then you have to be the loudest advocates in the community of wearing a mask and doing the things that will lower that background transmission rate.

This interview has been edited for clarity and brevity.
Ed Stetzer is executive director of the Wheaton College Billy Graham Center, serves as a dean at Wheaton College, and publishes church leadership resources through Mission Group. The Exchange Team contributed to this article.

Keep Your Distance: Words of Advice for Churches from the Surgeon General

Keep Your Distance: Words of Advice for Churches ...