Some social media "likes" gets Church of the Highlands kicked out of some public schools they were renting, but such cancel culture is the wrong answer.
Ed Stetzer 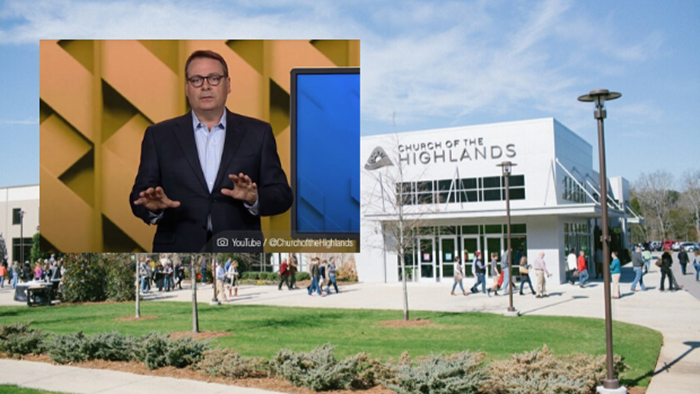 Image: Photo by Church on the Highlands on Youtube

Sometimes I feel like I am waking up in the scene from Mary Shelley’s Frankenstein where everyone grabs pitchforks and torches and goes after the monster. Today, it seems, the one under attack is the pastor of the Church of the Highlands, the largest church in Alabama.

It started with Charlie Kirk, the conservative leader of Turning Point USA. Kirk is an outspoken supporter of President Trump and has been at the center of several high profile conflicts over the past few years. Like many other social media figures, Kirk seems particularly skilled at provoking outpourings of admiration and disdain in equal measure. He knows how to use social media.

Most recently, Kirk has been one of the more visible proponents of the belief that, while racism is evil, claims of systemic racism are not true or are exaggerated. In this, Kirk represents a significant number of Americans, many of whom identify as evangelical. As I’ve written about, marched for, and spoken on, I believe that Kirk (and those who agree with him) are wrong.

Please see the video we just put out this morning from the National Association of Evangelicals, which (I believe) presents a better approach. Or, put another way, I’m of a different view and have been quite vocal about it.

Simply put, systemic racism is real and we have a key national moment to address it.

This controversy soon invovled Chris Hodges, the pastor of Church of the Highlands in Birmingham, when he liked some of Kirk’s social media posts (details here). In a lesson about the power of social media to—as the Epistle of James warns about the tongue–set forests ablaze, Hodges quickly found himself in the midst of a firestorm. It looks like people are gathering with pitchforks and torches for him and his church.

So, why am I writing on this?

It’s true that Hodges was a Trump supporter when I was not. He has also led his church to be the largest diverse church in Alabama, to engage the poor and marginalized, and to minister widely and well in his community. He and the church he leads has served the poor, engaged the sick, volunteered in the schools, and more. During the pandemic, Church of the Highlands has served thousands of meals, made masks, hosted blood drives, and helped other churches with online services.

Worth noting: the church will continue to resource the schools even after their church was kicked out saying, “Going forward, we will continue our financial support of the school system and encourage others to do the same.”

Of course, the school board was not offering the schools for free; the church was paying rent. Let me add that the people in that church are paying taxes to the school district and rent to use the space.

The Housing Authority of the Birmingham District and the Birmingham Board of Education also just cut ties with Church of the Highlands because Chris liked those social media posts.

The Rise of Cancel Culture

While Hodges made a mistake, I am wary of the ways people have weaponized social media in response. I warned in Christians in the Age of Outrage that even as Christians need to be angry at injustice and hate, social media can make us exceptionally bad stewards of our anger.

This new practice is called the “cancel culture.” And, as President Obama weighed in at a summit last year, it is both easy and ineffective at bringing lasting change. In fact, he condemned the notion of responding by ‘canceling’ someone: “That’s not activism. That’s not bringing about change. If all you’re doing is casting stones, you’re probably not going to get that far. That’s easy to do.”

Simply put, the cancel culture refers to the practice of withdrawing support for those in the public after they say or do something considered offensive by a certain group. That’s what the Birmingham schools and housing authority just did.

The cancel culture communicates here, ”We won’t take your money, tweet liker. We won’t let you serve our communities either. Out with you—because we are inclusive.”

Perhaps a better way is to take the time to look at the larger picture of a person or organization. Each of us have said or done something at some point that deserves conversation or pehaps even confrontation. That is undeniable. But does every instance require a public shaming and, in this instance, a cessation of ties that has offered so much good to so many?

Here is a church that wants to serve—and has served—and is leading the way in its community. Unfortunately, as of this writing, “The Housing Authority of Birmingham Division voted on Monday to no longer allow church volunteers and clinic workers to do work at public housing communities.”

They want to cancel the church’s ministry to the poor because they did not like the pastor’s social media likes?

We can go counter-culture to “cancel culture.”

While the rest of the world is leaning into its division and tribalism, Christians have the rare opportunity to learn from one another in ways that testify to the world about our shared identity in Christ.

As I wrote in Outrage,

“Scripture calls us to be people of the towel rather than people of the pitchfork. Jesus modeled this for us when he washed his disciples’ feet (John 13:1-17) without exception or expectation. This was not a simple object lesson but an example of perfect service that reflected Jesus’ humility when he came to earth (Philippians 2:1-11). Jesus then asked his disciples to imitate him in washing one another’s feet. People of the towel grasp that Jesus wants us to humbly and lovingly serve others in every human interaction. Perhaps there is no place that is more important in our day than in digital conversations.”

The best examples of this spirit in recent days have come from many African American brothers and sisters who have tirelessly held webinars, written articles, and responded to social media posts. With more reason than any other to walk away, I’ve been struck by their endurance in engaging for the sake of the Kingdom. Even in weariness, they press forward. Drawing upon the richness of their own theological tradition, it is a powerful lesson about what Christians can learn about our faith when we listen.

Where others seek to cancel, we are called to forgive and serve. To this point, I’ve already reached out to Hodges and some evangelical African American pastor friends and offered to connect them for conversation.

In general, I am hoping and praying that this moment will lead to many such conversations and could be the beginning of generational change that sees the evangelical church confront its failings and rise to meet the challenges of our world.

And Hodges he has already begun to model this response, apologizing and committing to serve all people in his church and community (to be clear, something he has already BEEN doing):

“As a pastor and, more importantly, as a follower of Jesus, I work to consider every action carefully, weigh every word, and be respectful of every person and opinion, as Christ taught.

I realize that I have hurt people that I love deeply because I ‘liked’ multiple insensitive social media posts. Each one was a mistake. I own it. I’m sorry. . . .

Over the last 20 years, our church and I have fought for the disenfranchised, marginalized, and hurting of ALL races in our community. But this week, I’ve learned that even with 20 years of loving and serving people, it’s still possible to have a blind spot that you just didn’t know was there.

I realize it is my responsibility to have more conversations to become better aware of the pain and the hurt, and to understand ALL people better.

The Long, Grace-Filled Road Ahead

But, here’s the deal: Hodges is not Trump. He’s not even Charlie Kirk. He’s a pastor who loves his diverse congregation. He’s learned that his likes hurt some people of color, and he is listening. Highlands will make it through this.

Hodges has already been learning, and will continue to do so. We are living through unprecedented times of conflict and change. There are no perfect leaders. We are all learning. Only those who model a humility to learn and an empathy for those who stumble are worthy of following.

The challenge for us is whether we will be able to follow Hodge’s model of seeking forgiveness and seeking to change when we need to change.

So, in a sense, this is not about supporting (or not supporting) Hodges’ likes or views. It’s about being all-in for grace and mercy. It is about persisting in the belief that the right way forward is to engage with grace over deep and profound issues rather than taking the seemingly easy way out of publicly shaming another.

This works in both directions—pitchforks feel good until everyone is pierced by them and no one is left to work together. Cancel culture eventually comes for every leader—your time may be coming.

And we as the church must find ways to step in when it occurs and cry, “Mercy!”

At the end of the day, cancel culture is self-defeating. It feeds into the narrative of the culture war that many fringe right-wing voices advance, and in which too many on the left engage: that you want evangelicals all out and all gone.

Yet, I’m one who has stated that there are real threats and injustices that we are called to confront as God’s people. Moreover, I am one who believes that the continued political naivety and transactionalism of some evangelical leaders in their uncritical support for President Trump is eroding our witness and will have lasting consequences.

But, liking some posts—is that the time to get the pitchforks?

We need a better way.

Ed Stetzer is executive director of the Wheaton College Billy Graham Center, serves as a dean at Wheaton College, and publishes church leadership resources through Mission Group. The Exchange Team contributed to this article, has updated it, and we will edit as more information is available.