Giglio, Cathy & Lecrae: Words and Forgiveness Matter, as do Listening and Learning

Embracing three lessons we need to have the difficult conversations about race.
Ed Stetzer 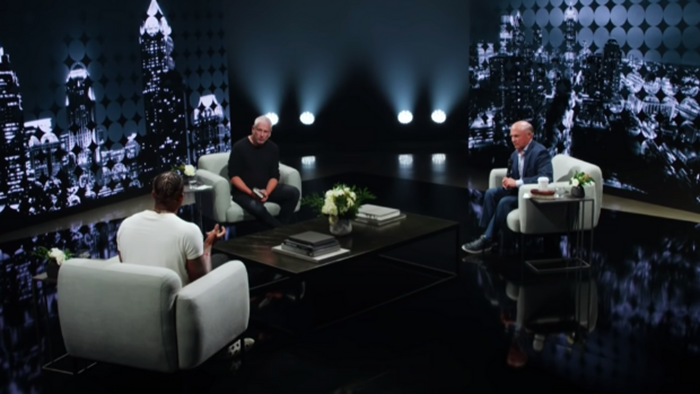 By now, you have likely seen the comments made by Louie Giglio, pastor of Passion City Church in Atlanta, that lit up Twitter. Comments for which he has apologized.

In a conversation with Lecrae and Chic-Fil-A CEO Dan Cathy, Giglio used the term "white blessing," soon after offering an explanation on Twitter that he was, “not seeking to refer to slavery as a blessing—but that [white people] are privileged because of the curse of slavery. In calling it a privilege/benefit/blessing. Word choice wasn't great. Trying to help us see society is built on the dehumanization of others. My apology, I failed.”

Yes, it was a mistake, and he apologized again this morning.

Of course, when Giglio said these words, the responses were fierce and fast—and global. A clip of less than two minutes (from a dialogue lasting an hour and ten minutes) has gone viral, with the three participants now receiving all manner of criticism and condemnation.

There are lots of things to be concerned about, including Giglio’s unhelpful and unclear words, but also the bigger issues at stake than one pastor and one video. We don’t want to lose sight of the issues and this important moment.

As I’ve published many thousands of words (and taken multiple actions) in the last few weeks about race and justice, I will take a moment to address another (and still important) issue—that we need more, not less, such conversations.

You see, I don’t want this moment to distract or deter Anglo pastors from listening and learning.

Yet, there is a fear— heightened today— that all it takes is one misstep and you are called “racist” or taken for a fool in such conversations. Because of this, pastors may fear having discussions about race. That’s a mistake.

This is hard stuff. But it’s too important for leaders to run from. We have got to engage for justice and for the good of others.

Giglio didn't articulate his thoughts well—he admitted that. But now his words are also taken to say things he didn't mean as well. That does not help anyone.

So how in the world do we talk about race? How can white leaders, pastors, and others be involved in change?

Here are three critical ideas we have to understand.

First, we must understand that conversations about race are always fraught with misunderstanding.

When we start to speak out on race, we will have to get used to the idea of possibly being misunderstood. We are trying to understand an unshared reality and it's not an easy process.

This means we have to take great care in listening, framing our words, and learning from others.

As an Anglo person, I am not in the same space of place as a person of color. These are unshared realities and experiences we want to understand as best we can. What we have in our country is 400 years of racism in various forms combined with systemic issues that remain today.

Our first step in this conversation is this: admit that we have an unshared reality.

What Giglio appeared to be trying to say, perhaps to a mostly white audience who might reject the word privilege, is that we have some "blessings" because we are white. Put another way, there are things we enjoy simply because we are white. None of us can deny that, and if we do, we are denying history and current reality.

Yet, he stumbled in his words and the result was, well, everywhere.

There are some terms or phrases we need to understand and define well.

White privilege is one of them. Although I cannot unpack everything in this one article, I do have certain benefits simply because I am white. When I, as a white person, walk into a store, people respond differently (and often more positively) than some of my African American friends experience.

For example, a few Christmases ago, I met with a new friend, an African American pastor named Charlie Dates. We met in Chicago’s gentrified Old Town neighborhood. I was going to be there passing out invitations for Moody Church. “I'm passing out flyers," I told him, "Come help me." He chuckled, informing me, "People are not going to take flyers from me in this neighborhood."

People assume certain things about me and something else about Dates because of our skin color. And he was right.

There is a privilege that I experience and acknowledging that is simply a matter of observation. It should not be controversial.

However, right now there are people pushing back on the term white privilege— which is, perhaps, why Giglio was looking for another term.

Instead of recognizing this as a broad reality in our society, some say, "Yes, but I am white and grew up poor, so it's not like that with me." What this comment misses is that the broad category of white privilege remains and does so across socioeconomic boundaries.

So, instead of trying to redefine the term as Giglio did, I would encourage pastors to just explain it as I just did above. This is not the time to be novel or creative in nomenclature.

Hear me out: as white people, we do not have the privilege of reframing white privilege.

Of course, some people say, "Just preach the gospel." They don’t want to talk about systematic racism or privilege.

Yet, Revelation 7 tells us that in heaven there will be every tongue, tribe, and nation—each identifiable. Each different and good, not stripped of its uniqueness. This is part of the gospel story.

Here's another term we have to define clearly: systemic racism. This means there are things in the system that maintain an out-of-balance reality for people of color. For instance, predominantly white communities have their property increase in value over time, whereas black communities generally devalue. That’s the way it is—regrettably and wrongly.

Furthermore, school funding is based on local community income, and black communities are typically poorer and thus have disproportionately less funding. Getting out of poverty is, well, systemically more difficult. It's hard to pull yourself up by your bootstraps if your bootstraps keep getting cut.

I’ll go into more detail on each of these (and more) terms in coming articles, but using correct terms, and defining what we mean by them, will help us have better conversations.

Third, we have to see things through others' eyes.

We cannot underemphasize the place of empathy right now. My friend Belinda Bauman wrote an important truth in her book Brave Souls:

“Empathy is not reserved for a few saints who walk above the earth. It’s not a feeling or an epiphany. No, empathy is gritty, personal, concrete, and practical, available for anyone thirsty enough to pursue real love….Awakening to the perspectives of others can radically change how we see the world and how we love others.”

The vast majority of black evangelical leaders would say there is systemic racism and white privilege, and that policing is conducted differently in black communities. They would affirm the phrase "black lives matter" not because they affirm the organization bearing that name, but because black lives, indeed, matter, perhaps as Christians would have learned from Jesus that Samaritan's lives matter (see Acts 1:8, John 4).

When people reply with "All lives matter" they miss the point entirely and cause more wounds. As one black pastor said to me:

Let me add an important note. Seeing through the eyes of others is not looking for people who agree with us. Be careful not to seek out someone who thinks like you and assume they are they are the people in that community who understand it best. In this case, for evangelical Christians, reaching out (and listen ting to) evangelical African American leaders might give a better picture and a better path to seeing through others’ eyes.

Of course, no one person represents the African American community (or any other community). So, listen widely and learn well.

It’s a remarkable thing to see through the eyes of someone else— and a great way to love your neighbor.

So, please don’t take the wrong lesson from this moment. Instead, perhaps respond as Giglio did, apologizing to his “black brothers and sisters,” then explaining that “I am trying to help myself” to learn and to help “my white brothers and sisters to understand that white privilege is real.” His comments reveal that he, like most of us in the white community, do have a lot to learn. It also tells us something more: In a day of platforms positions, it’s a reminder that having a position, like being an effective communicator, megachurch pastor, or (gasp) even a professor does not make us the teacher.

Instead, as Giglio said in his apology, he wants to be a learner. Just like I need to be.

That’s why here at The Exchange you will see me hand the mic to others in times like this, like we did with the multipart series after Ferguson, “It’s Time to Listen.” Or, the helpful series with Esau McCaulley from last week. Or on Ed Stetzer Live with John Jenkins and James Meeks. Or join us tomorrow as we listen to African American leaders on understanding this moment.

Mind you, I’ve still got a lot to learn, but I am trying to listen well. And, I’ve learned that it’s not enough to share a platform with people of color. It’s a good time to yield the floor to gospel-loving African American leaders, to sit under their tutelage, and for some this will be very hard, which speaks to the issue at hand.

But, to my fellow Anglo pastors, please don’t run away from these discussions because they are hard. Instead, learn from them. Lean into them. Don't be easily hurt if you aren't understood fully; clearly define terms as you discuss them; and especially listen, learn, and empathize with brothers and sisters of color.

They may walk the same streets as we do, but not the same path.

And, since this is not really about white pastors, be sure to listen to Lecrae’s comments as well.

Ed Stetzer is executive director of the Wheaton College Billy Graham Center, serves as a dean at Wheaton College, and publishes church leadership resources through Mission Group. The Exchange Team contributed to this article and have updated the article.

Giglio, Cathy & Lecrae: Words and Forgiveness Matter, as do Listening and Learning