Immigrants Have Been Severely Impacted by COVID-19. Your Church Can Help.

While many of us are seeing our situations improve, others are only becoming more vulnerable.
Scott Arbeiter 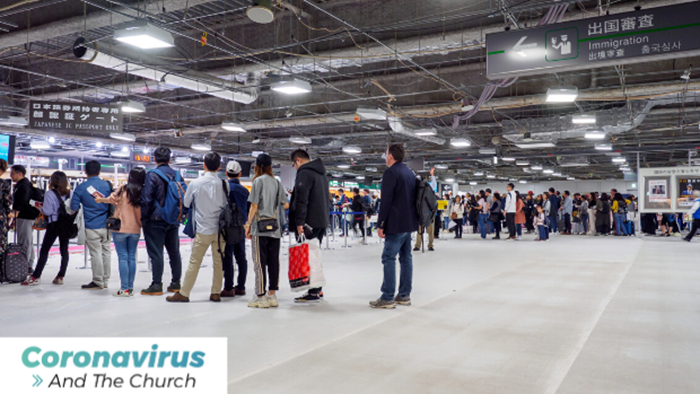 Image: Photo by SubstanceTproductions on Shutterstock

Immigrants and refugees are among the groups hardest hit by the novel coronavirus in the U.S. Economically, they are among the most vulnerable; before the pandemic, immigrants made up 31% of hotel workers, 37% of small restaurant owners, and 22% of food service workers.

Now, many are unemployed, lacking health care,and often ineligible for government relief programs. For example, very recently arrived refugees did not qualify for stimulus payments, nor did undocumented immigrants, including those whom our government has invited and required to file and pay income taxes using a special Individual Taxpayer Identification Number because they do not qualify for Social Security Numbers.

In fact, even the estimated 1.2 million U.S. citizen spouses married to undocumented immigrants were excluded if they jointly filed their taxes.

These are just numbers, but the faces behind them are real people. As the president of World Relief, I have witnessed both their dignity and their struggle. Those who belong to a church community are the lucky ones, because most have no one else to turn to for help.

Other immigrants make up a disproportionate percentage of essential workers, which puts them in a high-risk group for being exposed to the virus.

One in four doctors in the U.S. is an immigrant. More than one in three home health workers – a profession that’s becoming increasingly important as the virus spreads through nursing homes and other care facilities – are foreign-born. So are over a third of workers in meat processing, crop production, and public transportation.

Many came to this country alone. In refugee camps around the world, their families have been waiting to join them, completing paperwork and other formalities.

Some even had their plane tickets. Now with refugee resettlement halted and most overseas immigrant visa processing temporarily suspended, they have little hope of reuniting soon.

We’ve thanked our hospital workers with hashtags like #healthcareheroes and flooded our cities with blue light. But if we really want to thank our heroes, let’s reach out to the people who urgently need our help.

If you’re a Christian; if you have a paycheck coming in or food on your table or an hour to spare, you are needed. Now is an urgent moment for the church to step up, to stand with immigrant brothers and sisters in Christ and as a witness to those outside of the church. Here are a few ways to support immigrants and refugees right now:

Pray. As Christians, we are called both to love our neighbors, which includes a mandate to meet physical and economic needs as well as to fulfill the Great Commission. Responding in Christ-like ways to our immigrant neighbors—many of whom are already fellow believers, but others of whom do not yet know Christ—is an important witness of God’s love at a time when many feel vulnerable.

Let us pray especially for those who are not yet followers of Jesus, some of whom are from entirely unreached people groups, that God would draw people to himself in the midst of this crisis.

Volunteer to teach virtual ESL and other classes to refugees and immigrants. Several of World Relief’s local offices throughout the country have adapted their in-person tutoring programs to facilitate connections virtually.

Provide financial support (like rent payments or grocery money) for immigrants through World Relief offices or by supporting the benevolence fund of a primarily-immigrant congregation, many of whom are overwhelmed by the needs within their congregations.

Speak out when you see efforts to divide. While immigrants are in some cases uniquely vulnerable to the effects of COVID-19, they’re not uniquely responsible, but some in our society have blamed or even harassed Asian immigrants and Asian Americans, or immigrants more generally, as we face this crisis.

It’s an important time for Christians of all backgrounds to speak up, clearly and publicly, to reject divisive rhetoric. World Relief has been proud to join Christian groups such as the National Association of Evangelicals, the Southern Baptist Ethics & Religious Liberty Commission and the U.S. Conference of Catholic Bishops, as well as groups as diverse as the NAACP, the Anti-Defamation League and the George W. Bush Institute, in affirming that #AllOfUS are made in God’s image, are worthy of respect and are needed for a strong American response to this crisis.

Find your unique calling. Before the pandemic, a pastor friend in South Carolina helped several local churches travel to Greece to minister to refugees in the Moria refugee camp. Now, he is preparing to distribute masks made by refugees from Moria to local churches as they prepare to resume in-person worship in South Carolina. Ask how you can use your skills or networks to make a difference.

Speak up for immigrants in detention centers who are especially exposed or vulnerable to the virus. Utilizing alternatives to detention is the right thing for individuals who do not pose a threat to public safety. Write to your representative or the Department of Homeland Security, urging them to consider these options.

Unaccompanied children seeking asylum in the U.S. need our advocacy also. Some belong to parents who became so desperate waiting in Mexico in treacherous conditions for the chance to request asylum that they sent their children across the border without them. These children are now being deported alone, as the government is using the Public Health Emergency Powers Act to ignore the provisions of the Trafficking Victims Protection Reauthorization Act. I’ve signed a letter to President Trump urging him to reconsider restrictions on immigration processes, and you can do the same here.

It’s easy to think about our own families and problems right now and say, “I’ll help when I get my own house in order.” Fear and uncertainty permeate our communities. But while many of us are seeing our situations improve, others are only becoming more vulnerable. They are fighting for their livelihoods and their lives.

If we don’t do something, who will?

Immigrants Have Been Severely Impacted by COVID-19. Your Church Can Help.

Immigrants Have Been Severely Impacted by ...