I've marched for life like lots of evangelicals. I encourage you to march for black lives as well. Protests are part of who we are.
Ed stetzer 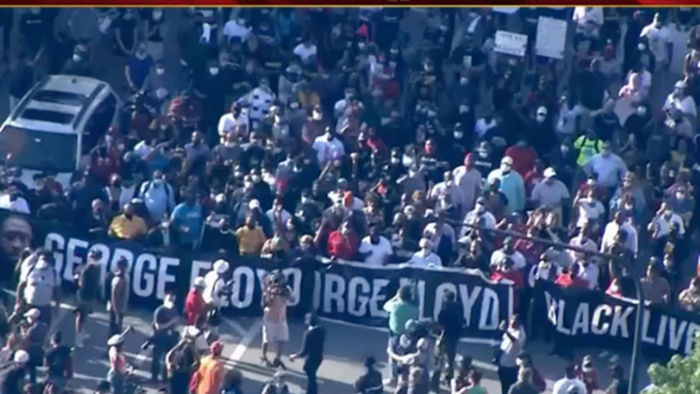 Earlier this week, I marched in the Bronzeville neighborhood of Chicago to join thousands of others in a peaceful protest led by African American faith leaders. 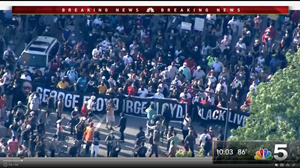 Yesterday, my family and I participated in a lament walk in Wheaton. I tweeted at the time, "At the Wheaton lament walk with my family. Communities all over the country are coming together to mourn and work for justice. I’ve never seen a group like this in Wheaton. It’s encouraging." And I meant it.

Now, mind you, I am doing more than protesting—things like partnering churches together and giving to help impacted communities, but I’m also headed out again right now to be a part of a local protest.

As Protestants, protest is a part of our faith heritage. That’s part of why we are called Protestants.

Martin Luther protested abuses in the Catholic Church with his 95 Theses. When he was given a papal bull from Pope Leo X calling him to recant, Luther burned it in protest. He was called a heretic and worse, yet he stood on his convictions. Indeed, we draw Protestantism from those who followed Luther in “protest” after he broke from the Catholic Church at the Diet of Worms in 1529.

Also, as a specific strain within Protestant Christianity, evangelicals have long history of protest. We draw our theological heritage from English Puritans who dissented from the Church of England.

As Americans, it is part of our civic heritage (one which we often venerate in textbooks and through holidays. The one that sticks out in our national conscience is the Boston Tea Party, one of the earliest protests of the American Revolution which rallied people against the oppressive tyranny of King George.

And as Evangelicals, we are people defined in part by our heritage of revival, reform, and renewal. We are at our best when we are calling ourselves, our churches, and our communities to resist both dead orthodoxy and empty moralism. At our core, we are supposed to be people who work to protest spiritual lethargy.

Christians have also protested moral wrongs throughout the years.

Most recently, evangelicals and other Christians have consistently—and against considerable public pressure—protested abortion, including participation in a major national March for Life every year.

Far from a recent evolution, modern evangelicalism was born out of a rejection of isolationism of fundamentalism. Carl F.H. Henry’s The Uneasy Conscience of Fundamentalism drew attention to the ways theological conservative Protestants in America had lost sight of the social dimensions of the gospel. Later, in his book A Plea for Evangelical Demonstration, Henry would focus more practically on the issue of public protest in calling evangelicals to take seriously our faith:

This is a call for authentic evangelical protest. A sensitive Christian conscience must openly confront enduring and intractable social injustices. Biblically concerned Christians need not forego a moment of open identification with those of other faiths and alien views in protesting what all together recognize to be unjust."[1]

As Peter Heltzel rightly observed, this was “Henry on fire for lasting social change as a vital expression of our gospel witness.” Drawing a clear parallel to Martin Luther King’s famous exhortation to moderate clergy that "injustice anywhere is injustice everywhere,” Henry pleaded for Christians to protest “what all together recognize to be unjust.”[2]

With unrelenting surgical precision, Henry repeatedly honed in not only on the systemic nature of evil but also on the necessity of a public response by the people of God. The result was an unavoidable call to evangelicals to see the call to protest as intimately and unavoidably connected to their faith.

Over the past two weeks, we have witnessed countless marches and demonstrations to protest not only the killing of George Floyd, but also the broader issue of systemic racism., Following other tragic reports of African American deaths in the recent past, Floyd’s death seems to be a tipping point in waking people to action.

But there is a difference it seems between the protests over the past two weeks and the litany of those I just noted above. The difference in these recent protests is that some conservatives (often evangelicals) seem intent upon focusing on other issues so as to bypass the heart of the matter and the point of the peaceful protests.

It’s worth addressing their argument.

Even as evidence of violence and prejudice mounts and the pleas from their brothers and sisters of color intensify, their social media feeds instead focus on the riots and looting. Tying the protests and riots together, some are trying to dismiss the former by way of the latter.

Here’s the challenge: You can simultaneously speak out against systemic racism and looting and violence. Evangelicals sometimes struggle with the former but demand the latter. Followers of Jesus must do both.

The faith leaders I marched with for justice in Chicago modeled this duality. Walking through the streets, they called out victims by name while proclaiming that black lives do matter.

I’m aware of concerns surrounding the BLM movement (and have published about those concerns here) but that doesn’t negate the significance of the phrase. Actually, those who respond with “All Lives Matter” are missing the point. All lives don’t matter if black lives don’t matter. (For a biblical parable on this, see my article #HellenisticWidowsMatter.)

Instead of throwing back casual soundbites, we should be grieved we have reached a place where so many in the African American community believe their lives do not matter to us. Regardless of politics, it marks a tragic failure on our part to live out scripture’s imperative to be known for our love.

Moreover, as we marched through Bronzeville for justice and fairness, leaders of that condemned the destructiveness of rioting and looting not only on the goals of the protest but in the very communities we were trying shine lights upon.

No Christian affirms a violent riot but this is the straw man some are using. Yet consider how this same tactic is used against us when applied to other protests. When extremists bomb an abortion clinic and kill an abortion doctor, we are defensive when others try to use the incident to tar the entire pro-life movement. Even as we join in condemning this violence as antithetical to the movement, it can quickly become a talking point to label the movement as violent, hypocritical, and self-defeating.

As we ask for others to avoid straw man tactics to silence our protests, we must resist the same temptation to silence others.

One of the disappointing facts of debates over the nature of protests is that the underlying message can get lost. Yet the reality is that the act of protesting itself is not the issue. Indeed, for too many, focusing on the protests can often be a smokescreen to avoid dealing with the harsh reality.

Instead, we get endless debates of protesting the right way. If only African Americans (and others seeking justice) would protest the right way, then we would understand and deal with the problem, we hear. Well, I can’t think of a righter way than a peaceful protest walking through Bronzeville in a march led by African American pastors.

It must not be lost that so many of these marches are saturated in the gospel and lead by gospel ministers. Indeed, David Neff reminds us that one of the most prominent civil rights song, "We Shall Overcome," was adapted by Peter Seeger from Louise Shropshire's "If My Jesus Wills (I'll Overcome)." That so many white people see only the looting fringe and not their brothers and sisters in Christ speaks to centuries of oppression must be bridged.

It's my hope and prayer that the church today will be building bridges rather than burning them. Otherwise, something far worse than property will be destroyed.

Standing and Marching for Lives that Matter

For me, I stand with the unborn who’ve been ignored. It’s interesting to see so many throw that back up on social media to me, yet I wonder if they’ve joined us at the national March for Life or even the Chicago march.

Many people have tweeted back at me mentioning abortion in the last couple weeks. I’m glad that are concerned for the innocent unborn. I’ve not tweeted back to ask how many have joined us for such marches for life. Tweets are easy— action is hard. I hope they will. 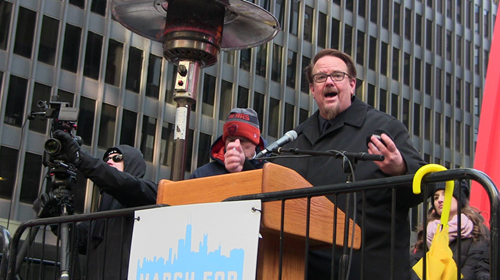 I assure you, it was pretty cold in Chicago when I spoke at that Chicago march. And yet, I saw Anglican Bishop Stewart Ruch there. And I saw him again this week. I tweeted, “I saw Anglican Bishop @StewartRuch at the faith leaders March on Tuesday AND we regularly see one another at pro-life marches. I love his consistency.”

This weekend, many of your African American brothers and sisters need to know you care. I was invited first by James Meeks—Meeks is an evangelical pastor who is a trustee of Moody Bible Institute and grad student in our Wheaton College graduate program. How could I not stand by my brother in Christ when he asked me to stand with him against injustice and stand by him in his community’s pain.

I was surprised that James Meeks insisted I join him at the front of the march—that’s me at the middle holing the Y and James holding the D. (It’s blurry in the article picture at the top, but here we are together—and I am glad to be by his side.)

I did not want to be up front, but he and Charlie Dates explained to me that it is important that white allies be present and evident. So I listened to them. 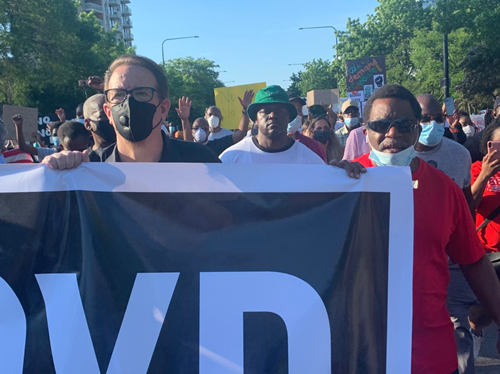 Lots of evangelical pastors where there that day, and I was glad to be a part of it. You might consider joining such a peaceful event in your own area this weekend yourself, because protesting is what we Protestants have been doing since day one.

Don’t let the fringe voices on Twitter keep you from standing for justice with your neighbor.

You already probably knew that the unborn need your voice. Well, so do your African American brothers and sisters who have been born into a world where they wonder if their lives really do matter.

Here are some additional resources on the topic from last week:

If you do go, wear a mask and follow best social distancing practices.