This coming weekend may represent the fewest people engaging in corporate worship in the last two millennia.
Ryan Burge 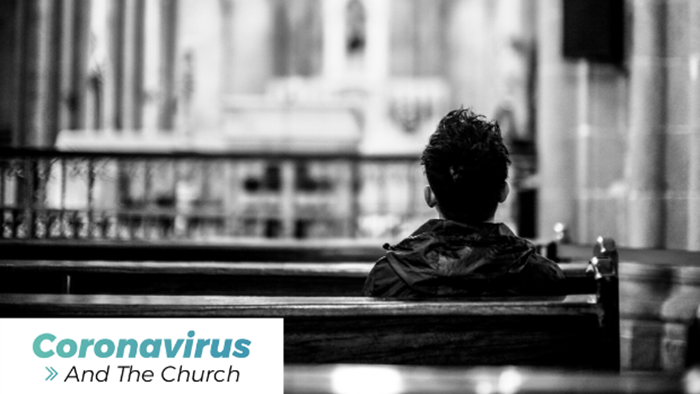 Image: Photo by Kenny Luo on Unsplash
You can access all our Coronavirus-related articles, in addition to partner resources from Saddleback Church’s PEACE Plan and The Humanitarian Disaster Institute at CoronavirusAndTheChurch.Com. The Leadership in the Coronavirus Crisis podcast is filled with key interviews. You can find it at www.stetzerleadershippodcast.com or subscribe on iTunes.

We are entering truly unprecedented times for people of faith. Churches, synagogues, and mosques around the world have suspended regular worship services for an indefinite period of time. This coming weekend may represent the fewest people engaging in corporate worship in the last two millennia.

This is uncharted waters for those in church leadership. Many pastors and denominational leaders have struggled with questions related to the immediate concerns facing the church. Issues like: How do we take our service online? or How do we take care of the elderly and vulnerable members of our faith community? While it’s key that pastors do their best to tackle these immediate concerns, at some point thoughts may begin to drift further out.

It’s crucial that pastors begin to think about the long term. Specifically , is COVID-19 going to lead to a long-term shift in church attendance?

Survey data related to an event like this doesn’t exist. In order to take an educated guess at what the future may hold, we can work with the next best thing—panel data. A panel survey asks the same people the same series of questions over a long period of time as a means to detect how behavior shifts and to identify the possible causes of those changes. I have panel data that was collected in 2010, 2012, 2014. It offers an illuminating glimpse into how church attendance changes over time. 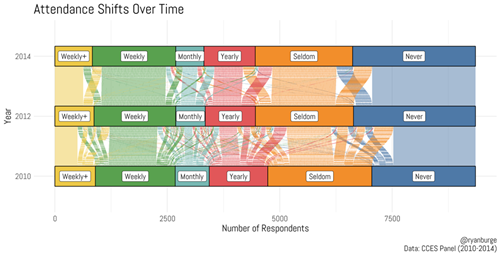 The thick blue bands on the right side of the graph indicate the lack of movement among people who never attend church services. When people are out of church, they are unlikely to return. Note also that the size of the never attenders increased over a four-year period of time.

There are also thicker bands of movement among those who attend church weekly or more than once a week. That indicates a general sense of stability—frequent attenders don’t alter their behavior, either. 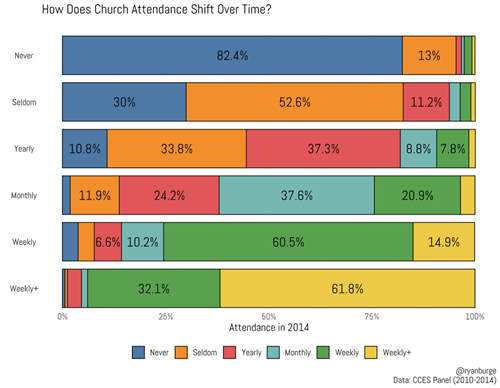 The overall shifts come into starker relief when just observing the changes from 2010 to 2014. The rows going down the left side of the above graph are individuals’ self-reported church attendance in 2010 and the size of the bars going left and right indicate where those groups ended up in 2014.

Starting at the top of graph, 82.4 percent of people who never attended church in 2010 were still never attenders in 2014. Added to that the fact that 13 percent said that their attendance has shifted to “seldom”; it becomes clear that this group is not radically changing its attendance pattern.

But that’s also true on the high end of the spectrum as well. Nearly 94 percent of people who said that they attended church more than once a week in 2010 were still attending weekly in 2014.

The middle of the spectrum is where a lot of movement occurs. While 60 percent of weekly attenders still attend once a week four years later, another 15 percent increased their attendance to more than once a week.

However, that also means a quarter of them are attending less.

If pastors are thinking about ways to ensure that their church attendance does not suffer permanently from the effects of COVID-19, the data points to good places to begin making connections. It’s clear that the most faithful members will likely stay that way, and people who have never attended church won’t be coming to church in large numbers after the lockdown is over.

Instead, a good place to start would be to touch base with infrequent attenders in their congregation.

Pastoral teams should identify people who show up once every four or six weeks. The data indicates that the people in the middle of the attendance seem to be much more open to encouragement.

A quick email, a short phone call, or a private message on social media may be enough to keep them feeling connected to their church and their pastor.

And it’s always a good idea to publicize ways in which the church is still serving the community by posting pictures and updates on Facebook and Twitter.

Even people who have fallen away from a regular church may be looking for a social outlet when the pandemic has begun to fade and frequent posts may be enough to plant a seed in their mind when things have blown over.