The fourth and final installment on Ed's recent interview with Lecrae.
Ed Stetzer 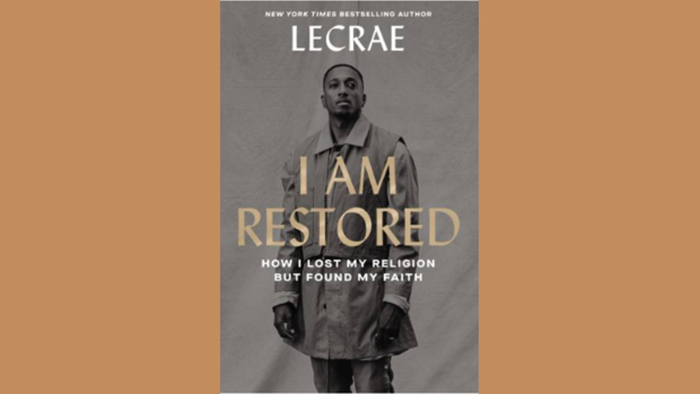 Image: Zondervan
Most people know Lecrae as the two-time Grammy award-winning hip-hop artist, entrepreneur, speaker, thought leader, a philanthropist, and New York Times best-selling author. His first book Unashamed was transparent about his life, including childhood abuse, drugs, alcoholism, rehab, and more. His new book, released on October 13, is I Am Restored: How I Lost My Religion But Found My Faith. I recently interviewed Lecrae to hear more about this book, his life, and his journey. Parts of this interview have been converted to a series here on The Exchange. Click on the following links for part one, part two, and part three. The interviews here have been edited for clarity and content, and you can watch the entire interview here. The interview is also available in podcast format on StetzerLeadershipPodcast.com.

Ed: One of the issues we see today is how our faith can send us to the other side of the world to share the gospel, but we don't want to talk about justice here.

Lecrae: I had to let go of the religiosity of saying that I want everyone to think I'm on the right track. I want everyone to accept me and love me. And I don't want to disturb anyone or rock any boats, which is ironic because that's why people loved me initially, because I rocked the boat: "Rebel, turn against the culture," "Send me, I'll go, let's go on foreign mission trips." They're like," Oh yes, yes. Tell us more, push us, shake us." And then I say, "Hey, there's social injustice." And it's like, "Hold on."

When I was disoriented in my faith, part of my struggle was that the only voices I could get to speak to me were white male theologians. And when I tried to research something, sites would pull up the same dominant voices. I began to seek other vantage points or voices that affirmed what I believe. I couldn't find them, which made me feel like they didn't exist. And so it made me struggle.

I went to Northern Africa and visited some churches and did some research and read some books there. And I heard voices that affirm truth that affirmed my faith that helped me realize number one, Christianity is global and not exclusive to America.

And number two, American evangelicalism is not the litmus test for a sincere, passionate faith in Christ . And though there are aspects obviously I believe in, like grace through faith. I believe in a grace-based righteousness, a faith-oriented righteousness. But I don't subscribe to the idea of the exclusivity of solid theology only existing in our backyard. That's something that I had to let go of as well.

Ed: And then people say, where is he now? I recently talked to Jemar Tisby and asked him a similar question. He said that the term he uses is, "I'm evangelical adjacent." Charlie Dates would describe himself as Bible-believing. So, what descriptor would you say? You're a follower of Jesus. You're a Christian. But someone says “tell us more.” What more do you say?

Lecrae: You know, that's a funny question. I have to give this some background.

What I found in my 20 years of being a follower of Jesus is human beings, and Christians in particular, do not do well with nuance. It's just a struggle for us. So, when you try to introduce nuance to the conversation, it's almost like our brain shuts down and we say, "Nope, Nope. There are only two categories. You know, you're this, or you're that." And I found this out as I was trying to navigate the secular-sacred divide artistically, and just trying to tell people that Christian is a great noun, but it doesn't work as well as an adjective. And it caused a firestorm. People were like, what are you talking about?

Even as we navigate, there's so many things, like when we say Jesus all the time and we know historically there's no J in the Hebrew language. It's grammatically correct, but it's what we say because we know what we're saying. I like what Charlie Dates said in terms of saying I'm a Bible-believing Christian. That's my aim.

My aim is to see things from the lens of scripture and not the lens of culture. I want to interpret the culture through the scriptures and not interpret the scriptures through the culture. I think that that's a struggle here in America because we have been so institutionalized by American culture that we don't even know how to see God outside of it. We believe the way church is done here institutionally is the way it was done in Acts when it clearly wasn't. For instance, there were no worship teams on staff in the book of acts.

I tend to look for where there is commonality and where there is agreement. And I tend to try to lean into that, to understand what that looks like, realizing that I want to be in the center of all those overlaps, and that's what I aim for. I want to see what people are pursuing that is true in all these different circles. I want to live in that space.

Ed: Think of an audience of people, maybe like me, who are evangelicals who love Jesus; what are you hoping for me to know or learn from both the book and the music that would be important for me to understand?

Lecrae: I think the biggest thing is to recognize that if you keep the foundation of Jesus and you deconstruct all these layers that you've established to figure out what makes sense, that God is so good, that he's a restorer, that he will restore things in a healthy way as you pursue him, and that he's desiring us to pursue him. He's telling us to taste and see, telling us to knock and he will answer. That's the overarching picture that I want people to have.

On a micro-level I want people to be able to say, "I don't have this figured out, and God wants me to be aware and to be very gracious and to be open-handed with people that I don't quite understand where they're coming from."

I can't retreat to the safety of doing things that are traditional for the sake of it being comfortable.