It is imperative for the church to seek truth about issues of race.
Glenn Bracey, Chad Brennan, and Michael Emerson 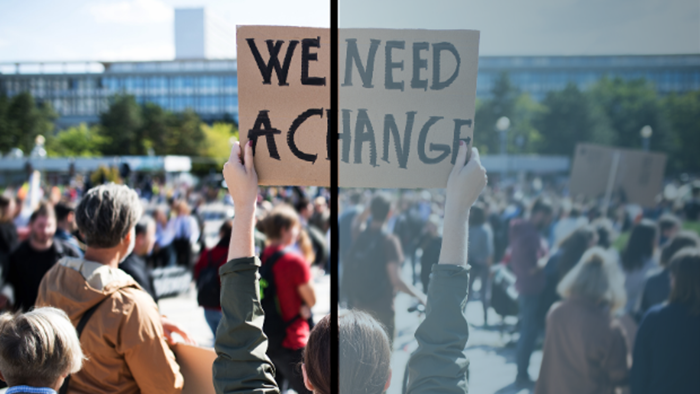 The racial justice protests over the last six months have focused the attention of many Christians on the racial tensions that continue to plague our society. We are at a pivotal moment when we must decide whether we will support the systemic changes that so many are asking for or we will support the status quo. The decisions we make today will have implications for decades, if not centuries, to come. It is our hope that our decisions will be based on prayer, scripture, and a clear understanding of racial dynamics in our country. Unfortunately, racial clarity is elusive for many Christians.

For the last two years, we have been working in partnership with the Barna Group on the largest study of racial dynamics in U.S. Christianity ever conducted. The following graph is a most recent example.

However, many studies show that our society is plagued by racial problems. For example, in regard to hiring, a recent analysis of 24 field experiments, which included data from more than 54,000 applications across more than 25,000 positions determined, "...at the initial point of entry — hiring decisions — blacks remain substantially disadvantaged relative to equally qualified whites, and we see little indication of progress over time."

In Blacks and Whites in Christian America, Emerson and Shelton explore reasons why Black Christians have higher levels of racial clarity. They point to Black Christians experience as victims of racism, the role of the black church in surviving centuries of oppression, and collective expectation to see God actively working for social justice in our world.

In contrast, why do so many Christians in all other racial groups struggle with racial clarity? Let’s consider the key barriers.

Dating back to the earliest days of colonization, European colonists and their descendants defined themselves as "Christians" and non-Europeans as non-Christian barbarians (see Unsettling Truths by Charles and Rah). Their perceived cultural superiority and "blessed by God" status was used to justify their possession of indigenous peoples’ land and the stealing Africans’ labor. The fusion of Christianity with European domination and superiority is a tragic legacy that continues to this day.

It has been well documented by social scientists that people are more inclined to take in new information that matches their existing assumptions and desires. This is called "motivated reasoning" or “confirmation bias.” With our research, we see a consistent pattern of Christians rejecting new information because receiving the information would challenge their existing views, disrupt their sense of identity, or produce a sense of responsibility to change their actions. It is much easier for them to dismiss the challenging information as "fake news."

Instead of challenging the problematic connection between Christianity and European domination, many Christians have developed a cultural toolkit that justifies the connection. In Divided by Faith, Emerson and Smith describe a cultural toolkit which many Christians use to understand racial dynamics: freewill accountable individualism, relationalism, and anti-structuralism. The toolkit prevents Christians from having clarity on key topics like systemic injustice, white privilege, and structural racism.

The social circles of Christians are typically composed of people who share their race and racial views. For example, a 2013 survey by the Public Religion Research Institute found that the social networks of white Americans are 91 percent white and that 75 percent of whites have entirely white social networks. Therefore, rather than challenging inaccurate views, the social circles of many Christians confirm them. That is known as "groupthink."

We will unpack this barrier a bit more than the others because it is complex and especially powerful in the U.S. today. In August 2020, respondents were asked, "Whose leadership are you listening to regarding racial justice?" The most common response was, "the news/media" (22%). In a national survey in 2019, we asked respondents which media outlets they trusted as reliable. The most frequently selected media outlet by Christians was Fox News (see responses below).

Selected "Fox News" for "Which of the following news outlets do you believe provide the most reliable information?" (n=2784, July-August 2019)

As you can see, Christians in all racial groups, except for Black Christians, were more likely to trust Fox News. This is significant because the information provided by Fox News in regard to racial dynamics is often skewed to favor the status quo, and to teach Christians how they should apply their faith. To illustrate, we draw on two examples from Fox’s Tucker Carlson Tonight show, currently the most viewed cable news show in the nation.

The September 1 opening segment began with scenes of urban violence. Carlson then asked why this is happening, why are people in the “fairest country in the world” supporting groups like Black Lives Matter and wanting to tear down the nation? The answer? Carlson states, “For a generation Americans have been taught to accept the underlying premises that made BLM possible. Human beings can be reduced to their race. Skin color equals privilege. Equality under the law must be abandoned. These are lies. But suddenly they're everywhere. Americans have learned them in school, learned them on the job, heard them even in church.”

Throughout the segment, taglines appear on screen, such as: “Federal workers forced to attend seminars on ‘white privilege’ & ‘microaggressions.’” while Carlson and his interviewee discuss racial dynamics with terms like "existential threat," "neo-Marxist rhetoric," "corrosive," and "absolutely terrifying."

The next night (September 2), Carlson opened with a clip of a Catholic Mass in New York City where a priest led a responsive prayer “denouncing white privilege.” Carlson then states, “Wow, that’s 2020 in 20 seconds. This is a religion. The left has won. For years they have tried to replace God with political orthodoxy, and now they’ve succeeded.”

Carlson says to his interviewee, Eric Metaxas, “That, the video of the Catholic Mass in which the Nicene Creed has been replaced by talking points from BLM really should make us think.”

Metexas explains, “...The people who are using these new terms 'systemic racism' or 'white privilege,' these are Marxists. These people not only don’t believe in God, they hate God...When you’re using these kinds of terms I want to say to every pastor, every Christian in America, this is something, if you do not reject this with everything you have you are bringing about the death of Christian faith in America...They’re taking over churches. Don’t let it happen to your church.”

Despite not speaking with any clergy or religious leaders, the message for Christians is clear: terms like “white privilege” are divisive and anti-Christian, as are groups like Black Lives Matter. Those who are faithful must resist or it will lead to "the death of the Christian faith."

Sadly, the clarity barriers we described above are just the tip of the iceberg. We have not touched on theological barriers, political barriers, economic barriers, power dynamics, or many others that could be mentioned. Understanding and addressing those complex, interconnected dynamics is not a quick or easy process.

Despite the challenges, we know that clarity is possible. We offer the following recommendations for those who want to grow in their racial clarity:

The time has come for change. We must now move to make our actions match our words. No matter how much we have stumbled to date, it need not define us. We must seek Truth. We must seek justice, reconciliation, and unity. It’s not an option; our faith says it's imperative.

Join the conversation on Facebook
Tags:
None
Posted:
October 2, 2020

1 of 2
Responded "Definitely" to "Do you think our country has a race problem?" (n=1464, June-July 2020, Barna Group, Race Today)Selected "Fox News" for "Which of the following news outlets do you believe provide the most reliable information?" (n=2784, July-August 2019)