An interview with Steve Addison on his latest book “Your Part in God’s Story: 40 Days from Genesis to Revelation.”
Ed Stetzer 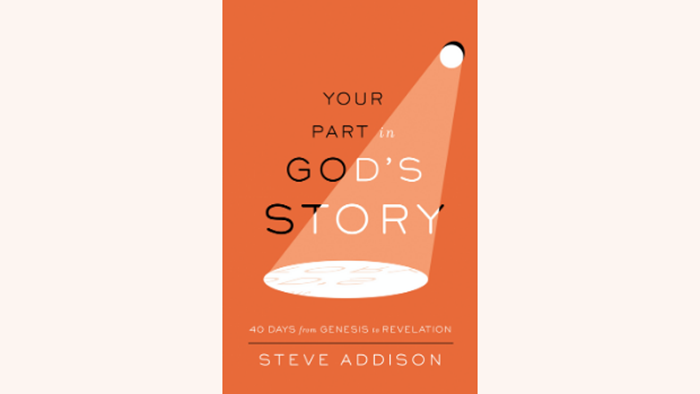 Image: 100 Movements Publishing
Today I welcome Steve Addison to The Exchange for an interviw on his latest book. Steve Addison is the author of five books on movements that multiply disciples and churches. His latest book is called, Your Part in God’s Story: 40 Days from Genesis to Revelation.

Ed Stetzer: Why did you write this book?

Steve Addison: For years I’ve been struck by what happened when Jesus rose from the dead and discovered his disciples had scattered in fear, failure and despair. As far as they were concerned it was all over.

Yet Jesus was about to launch a missionary movement that will go to the whole world with these same disciples who have failed him. How did he do that?

Jesus restored them, then he walked them through the books of Moses, the Psalms and the Prophets over a period of forty days. He showed them why the Messiah had to suffer then rise from the dead. He gave them their mission to take the gospel to the world and then he promised them the power of the Holy Spirit.

That’s how Jesus turned failed disciples into a missionary movement. If he did it for them, he can do it for us today.

Steve: Over the last few years I’ve been working through Genesis to Revelation asking these questions:

I wanted others to ask the same questions of the Scriptures and of themselves. That meant choosing forty decisive moments on the journey from Genesis to Revelation. Understand those moments, and you’ll understand God’s story and your place in it.

God’s story is the one story that unites all the stories of Scripture—from creation to the new heavens and earth. Along the way God chooses ordinary people to play their part in his story. Each one is an unlikely hero, but God shapes them and enables them to fulfill his purposes. There’s a grand story unfolding that includes individual stories of the people God has called and shaped to play their part.

Ed: Give us some examples of the studies.

Steve: We drop in on Isaiah at the time of King Uzziah’s death (Isaiah 6). The might of Assyria is on the rise. Judah is under threat. Where will Isaiah put his hope? In a human king? He has a vision of the living God whose glory the temple can contain. Angels cry, “Holy, holy, holy is the Lord Almighty; the whole earth is full of his glory.” The building shakes and smoke fills the temple.

God’s people were meant to display his glory to the world instead they worship idols, indulge in sexual immorality, and oppress the poor. They defile God’s name. Isaiah cries out to God for his own sin and the sin of his people. God took the initiative, he revealed his glory and his judgment. He chose Isaiah, forgave his sin and sent him to call a rebellious people to repentance. Isaiah sees that from Israel will come a holy remnant. From beginning to end this is a work of God, yet Isaiah is shaped by God to play his part. The Bible is full of stories like this. They tell the story of the one true God who has a plan and calls us into it.

We follow Peter’s story over three studies. We look at his calling. He’s just a fisherman who has met Jesus. His life was turned upside-down with that miraculous catch of fish. He gets a glimpse of who Jesus is and is overwhelmed by his unworthiness. Jesus commanded Peter to follow him and promised to teach him to fish for people. Peter didn’t volunteer, he was chosen. Then at the cross Peter failed his Lord. This is the man Jesus chose as the leader of a missionary movement. Jesus restored Peter and shaped him to fulfil his calling in the power of the Spirit. That ought to encourage us. Then ten years later God intervened to disrupt Peter again at the house of the Roman centurion Cornelius. Peter and the early church had dragged their feet in obeying the command to go to the nations. It is God—Father, Son and Holy Spirit—who turned Peter around and then through Peter turned the church around. Now the way was prepared for the Gentile mission led by Paul. It’s God’s story, he writes it, but he calls us and shapes us to play our part.

Ed: Who are you writing for?

Steve: Anyone who wants to follow Jesus and allow him to teach them to fish for people. Through my podcast I get to interview people from all around the world who are obeying Christ’s command to make disciples—in Texas prisons, in high tech companies in London, in the townships of South Africa, in their local high school, or in lands where disciples are under the constant threat of violence. They are my heroes. I want them to know that what they are doing flows from the heart of God. I want them to learn how God prepares, calls and shapes them. How he reveals his power through their weakness to display his glory. How his plan will triumph over every obstacle. I want them to know that they are surrounded by a cloud of witnesses who have gone before them.

Ed: How did writing this book change you?

Steve: I am by nature a glass half-empty person. I wrestle with the temptation to despair—the state of the world, the state of the church, the unfinished task of making disciples. Writing this book taught me to shift my focus to the One who is Creator and Lord. He has spoken and he will fulfil his Word. As Luke 24 tells us, the Messiah has suffered and is risen. The message of repentance for the forgiveness of sins will go out to all peoples in the power of the Spirit. The fruit of God’s mission will be disciples learning to obey Christ together in communities all over world. Getting there means travelling over some bumpy roads, but God will do it.

Ed: How does this fit with the other books you’ve written on movements?

Steve: This book goes to our identity. Too often we think our strategies and methods will carry the day. They’re important, but unless we know the character and purposes of God, practical considerations are not enough. We need to know that what we are doing is right, that it aligns with the life and ministry of Jesus, regardless of immediate successes or failures. Jesus’ identity, affirmed in his baptism and wilderness testing, was the foundation for the launch of his missionary movement.

A journey from Genesis to Revelation in the presence of the Risen Lord provides the foundation we need for a lifetime of serving him faithfully.

Steve: I don’t want people just to read this book and put it back on the shelf. I’m challenging them to commit to forty days of reading, reflection and prayer to understand God’s story and their part in it.

They can journey as an individual or in groups. They can trust Jesus to do for them what he did for those early disciples. He met them in their failure. He opened their minds to understand his Word. He showed them their part in God’s story. He promised the power of the Holy Spirit. Then he set them loose on the world!

STEVE ADDISON is a catalyst for movements that multiply disciples and churches everywhere. He is a missions leader, author, speaker, and mentor to pioneers.

To learn more about the 40-Day Challenge and connect with Steve visit movements.net.