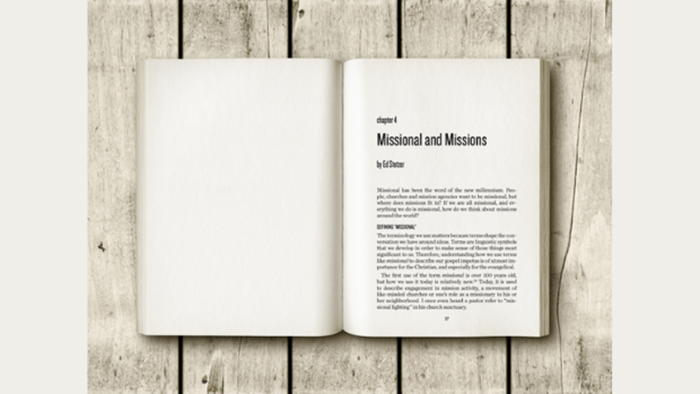 Recently, I contributed a chapter to a book called Conversations on When Everything is Missions: Rediscovering the Mission of the Church. Over the next few days on The Exchange, we will be releasing this chapter, which I wrote on recalibrating our thinking on the terms “missional” and mission.” You will find Part One below.

The full book is available for purchase here. In addition to the chapter from myself, you will find contributions from other leaders, such as Dr. David Platt and J.D. Payne.

Missional has been the word of the new millennium. People, churches and mission agencies want to be missional, but where does missions fit in? If we are all missional, and everything we do is missional, how do we think about missions around the world?

The terminology we use matters because terms shape the conversation we have around ideas. Terms are linguistic symbols that we develop in order to make sense of those things most significant to us. Therefore, understanding how we use terms like missional to describe our gospel impetus is of utmost importance for the Christian, and especially for the evangelical.

The first use of the term missional is over 100 years old, but how we use it today is relatively new. Today, it is used to describe engagement in mission activity, a movement of like-minded churches or one’s role as a missionary to his or her neighborhood. I once even heard a pastor refer to “missional lighting” in his church sanctuary.

Sometimes people also use missional in ways evangelicals may find problematic. Some use the term to promote social justice and societal transformation to such an extent that justice overshadows or even replaces a call to personal evangelism. Others too narrowly apply the term to refer to the call to be a missionary to one’s local community or neighborhood. While this sounds admirable at first, when not seen as part of the whole, it removes focus from cross-cultural mission work. Still others use missional as a term to describe a different way of doing ministry that shifts the emphasis away from the program and event-based ministry popular in attractional and church-growth churches.

Missional has become an ecclesial Rorschach inkblot test. People see in it what they want, and sometimes miss what they need.

The purpose of this chapter is to help us make sure we don’t lose the missions in the mission of God and that missional does not distract us from God’s mission to the nations.

What “Mission” and its Adjective “Missional” Get Right

Despite how the term has been used differently throughout the past century and across the theological and ecclesiological spectrums, there is some common ground that can serve as a foundation of understanding. A consensus has developed over the last century and now evangelicals as well as mainline Protestants, Roman Catholics, and to some extent Orthodox Christians believe that mission is a to be more broadly understood as rooted in the identity of God and a part of the call of His people. Or, as evangelicals might put it specifically, 1) God has a mission, 2) God’s mission is rooted in the identity of God Himself, and 3) God sends His people on mission.

This basis of understanding comes from the Bible, but is widely seen as being introduced (evangelicals would say re-introduced) by Karl Barth. And while evangelicals would typically disagree with Barth on many other subjects, here we can agree that God has a mission and He is on mission because mission is inextricably woven into the fabric of who God is. And just as God the Father sent the Son and sent the Holy Spirit as part of His mission, so too He sends the church into the world to proclaim His gospel and raise up disciples in all nations. We see the fruit of God’s mission story in John’s vision in Revelation 7 where the gospel has reached every nation, tribe, people and language. It is for this purpose that God sends His people into the uttermost parts of the world to evangelize the lost.

Getting Our Mission Language Right

While it is undoubtedly true to say that mission is rooted in the identity and character of God and the church is invited to participate in the mission of God (missio Dei), the outworking of this idea has also been destructive to mainline Protestant conciliar mission work (think World Council of Churches). We cannot unpack the full story here, however I (and many others, more eloquently) have walked through the conciliar theology of mission and its ultimate dismantling of cross-cultural mission work.

The movement that started in Edinburgh at the World Missionary Council in 1910 looked remarkably different by the 1960s, as I have written at length elsewhere. And the idea of mission was the driving force for much of these changes.

Thus, it is important to understand that an idea can be both true as well as dangerous. And where things get dangerous is when the term mission is so broadly applied. Stephen Neill’s words come back to haunt us. Neill was especially concerned about the loss of cross-cultural, traditional missions work and I share that concern today. It is among churches that consider themselves “missional” that I often find a lack of missions activity. I believe this to be for five reasons:

I don’t intend to come down hard on Spurgeon or anyone who has reiterated his famous quote. I’m sure somewhere I’m recorded in the excitement of the moment saying it, too. But if we are going to use clarity in our terms so we can properly nuance what mission means, Spurgeon’s quote won’t do. It’s simply too simplistic.

H.L. Mencken was right about this: “There is always a well-known solution to every human problem—neat, plausible, and wrong.” Clarity on the terminology we use is vital. Therefore, I’m of the belief that this mission about which we speak is important enough to be nuanced. We should be precise about the language we use because history has shown us that getting it wrong can have dangerous consequences.

So then what are the proper definitions of mission, missions, missional, etc.? Broadly defined we can say that mission is what God is doing in the world, and we join Him in it. Missional is simply the adjectival form of mission33 and describes the mission-shaped life. Missions is a subset of mission. A more substantive way to frame it is like this:

Missio Dei: Missio Dei is God-focused.34 God is on mission to glorify himself. Missio Dei is what God is doing in the world in light of His good character and love for His creation. This is the all-encompassing redemptive disposition of God toward His fallen creation. Missio Dei gives birth to the missio ecclesiae, the mission of the church. God is at work in the world through common grace. Through general revelation and the work of the Spirit, he is preparing hearts for him in missio Dei.

Mission: Mission is everyone-focused. This comprehensive term refers to “the entirety of the task for which the Church is sent into the world.” Some find it helpful to describe this mission in two complementary movements: centripetal and centrifugal. The Church exhibits a quality that attracts the lost for all the right reasons. At the same time, the Church is sent into the world with a missionary purpose. Together these describe mission as something we participate in—joining in what God is doing. If you’re a follower of Jesus, you’re called to mission by nature of declaring Him as Lord of your life. Luke 4:18-20 describes how Jesus came to serve the hurting, the marginalized and the poor. Luke 19:10 describes how Jesus came to save the lost. Mission is this dual work of gospel proclamation and demonstration.

Missional: Missional is believer-focused. It describes believers and churches who live out the mission through the totality of embracing, embodying and enacting God’s mission in the world. Christians are being missional when, as instruments of His kingdom, they join Jesus’s work of serving the hurting and saving the lost.

Missions: Missions is calling-focused. It is the application of mission in a specific, usually cross-cultural response to the calling of God. So while I may engage in mission in my neighborhood, the missionary engaged in missions is responding to the call of God in a cross-cultural context. I prefer to use missions to refer to particular people who pursue a particular calling in a particular context. While there is a “sent-ness” in the calling of all Christians to live on mission (to be missional), missionaries are those who engage in evangelism and discipleship through cross-cultural ministry. Increasingly the interconnectedness and pluralism of our globalized world makes engagement in missions possible without leaving our own cities. These local missions opportunities will undoubtedly continue to grow. So today, serving in missions could include moving to an unreached people group in another land or moving into a predominantly Muslim community in urban America. In both cases the believer seeks to learn language, culture, and the best means to show and share Christ.

With our working definitions in order, the inevitable question is “now what?” What do we do with our language so that we might understand how to live on mission with Jesus to reach the lost? Central to our calling as followers of the King is our call to display the glory of God through the redemption of those who are far from Him.

Join the conversation on Facebook
Tags:
None
Posted:
January 20, 2021