The Supreme Court Sets a Good Precedent in Fulton, But Questions Remain

The court sidestepped some of the major issues, but this is still a good day for religious liberty.
Ed Stetzer and Andrew MacDonald 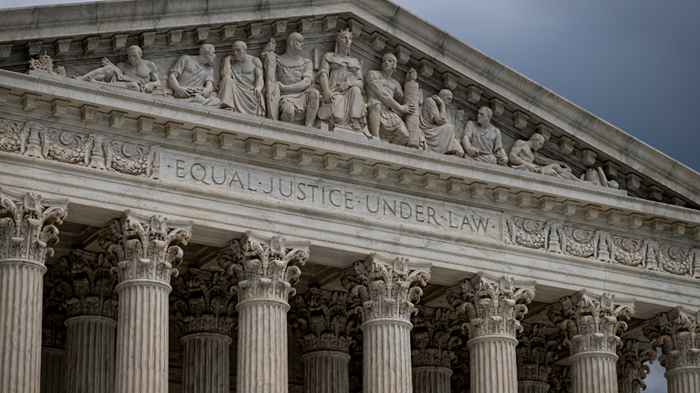 This week the United States Supreme Court (SCOTUS) delivered an overwhelming ruling in favor of a Catholic foster care agency that may carry significant implications for the church, children, and families. In a surprising unanimous decision (9-0), the Court determined that the city of Philadelphia had erred in breaking a longstanding contract with Catholics Social Services (CSS) over their refusal to certify same-sex couples. The majority opinion was offered by Justice Roberts with three separate concurring opinions offered by Justices Barrett, Alito, and Gorusch.

The case for whom the Supreme Court issued its ruling is Fulton v. City of Philadelphia, a landmark case that impacts more than 400,000 children in the U.S. foster system. NBC offered an overview of the case:

In March 2018, Philadelphia ended its foster-care contract with Catholic Social Services (CSS) due to the organization’s policy of not placing children with same-sex couples. The city’s nondiscrimination policy guarantees “full and equal enjoyment of services and facilities without discrimination or segregation” because of gender identity, sexual orientation, race, religion, marital status, and a number of other characteristics.

In response, CSS filed suit, claiming the policy violated its First Amendment right to religious exercise and free speech. Losing in district court, the agency appealed to the 3rd U.S. Circuit Court of Appeals, which unanimously affirmed the lower court’s decision in April 2019.

It is worth noting that the CSS is wanting to place children in foster care. It’s also worth noting that other agencies are willing to place children in foster care with same-sex couples. So, the question of whether children can be placed with same-sex couples is already settled—the question was if people of faith can serve the system without leaving their faith commitments at the door.

The 1990 ruling on Employment Division v. Smith is worth remembering here, where Antonin Scalia wrote the ruling that said: "Americans cannot have exemptions to laws on religious grounds as long as those laws are neutral and generally applicable to everybody." The Fulton plaintiffs argue the city of Philadelphia's anti-discrimination laws are neither neutral nor applicable equally. As Time reported, "such a reconsideration would send shockwaves through the religious and civil rights communities."

CSS also looks also to the 2018 SCOTUS decision where the court decided in favor of Colorado baker Jack Phillips, who argued his beliefs on marriage allowed him not to sell a wedding cake to a gay couple. Justice Anthony Kennedy wrote that Colorado was hostile toward Phillips' views; CSS believed Philadelphia showed the same hostility.

And, I believe they did, which is why this ruling— like Masterpiece Cake Shop— is both significant but narrow.

Of course, this is more than a case about religious liberty. It is about children in the foster care system.

It is worth remembering that the call of Scripture to care for the marginalized and those with no voice—including foster care children—is clear and consistent.

The prophet Zechariah declared: “Thus says the Lord of hosts, 'Render true judgments, show kindness and mercy to one another, do not oppress the widow, the fatherless, the sojourner, or the poor, and let none of you devise evil against another in your heart'” (Zechariah 7:9-10). The part of the Great Commandment that says to "love your neighbor as yourself" comes from Leviticus 19:18. Read the context of that verse and you see statements like these:

Leave the edges of your fields for the poor and the stranger to glean (v. 10) Do not curse the deaf or cause the blind to stumble (v. 14) Do not commit injustice toward the poor (v. 15)

I could list scores of verses like these but what becomes clear to anyone who thoroughly reads their Bible is that God has a heart for the marginalized, the oppressed, and the poor.

As Christians, this is why we should be vocal defenders of the unborn, readily combat the personal and systemic evils of racism, and a host of other injustices that thrive in our modern world. It reflects the very heart of God as revealed in scripture.

Sadly, vulnerable children are too frequently lost in public discussions of discrimination and loss. The hard work of adoption and foster agencies, a reflection of God’s own love for us in adoption as his children, is ignored. Worse yet, their ministry can even be politicized by those who see their work as an opportunity to score political points.

This is part of why this Supreme Court ruling is so critical, and why Christians need to prayerfully consider how best to navigate this problem in a spirit of love and truth. On the one hand, we have an overextended foster care system, understaffed and in desperate need for parents to care for children. On the other, we have the conviction that children should have the opportunity to be cared for by those reflecting biblically consistent homes.

As with many other issues in our world, this impasse pits two competing needs against one another while at the same time supercharging the conflict with the weight of our decades-long culture war. As this chasm between cultural and biblical values continues to widen in the coming years, Christians need to be ready for similar impasses. Moreover, their pastors must feel the weight of properly preparing their congregations on not simply what to think but the how and why of a biblical witness.

Regarding this case of foster care, the issue is that Christian agencies want to participate in the foster care system while retaining their theological beliefs about family, marriage, and gender. Recognizing that there are now plenty of agencies that will place LGBT families, the central question is why should the government restrict Christian agencies because of these convictions? This was stated most forcefully in his concurring opinions by Justices Alito ad Gorsuch:

The city of Philadelphia (City) has issued an ultimatum to an arm of the Catholic Church: Either engage in conduct that the Church views as contrary to the tradi- tional Christian understanding of marriage or abandon a mission that dates back to the earliest days of the Church— providing for the care of orphaned and abandoned children.

The City has made clear that it will never tolerate CSS carrying out its foster-care mission in accordance with its sincerely held religious beliefs. To the City, it makes no difference that CSS has not denied service to a single same-sex couple; that dozens of other foster agencies stand willing to serve same-sex couples; or that CSS is committed to helping any inquiring same-sex couples find those other agencies. The City has expressed its determination to put CSS to a choice: Give up your sincerely held religious beliefs or give up serving foster children and families. If CSS is unwilling to provide foster-care services to same-sex couples, the City prefers that CSS provide no foster-care services at all.

Under pressure by the city, the Catholic Church–and by extension other Christian charities–were being forced to choose between mission and truth. Far from holding a monopoly on foster care, Christian agencies are asking only for the right to participate in a broader system in accordance with their belief.

By unanimously ruling for the Fulton foster agency, the Supreme Court sent a signal that this right to participate in social institutions and practices should in no way limit expressions of religious liberty. In the majority opinion, Justice Roberts argued that in adjudicating issues of religious burden: “Government fails to act neutrally when it proceeds in a manner intolerant of religious beliefs or restricts practices because of their religious nature.” For many Justices, this reiteration of the 1990 Smith ruling was insufficient. Both Gorsuch and Alito offered powerful concurring resolutions arguing that Smith unfairly empowered the government to prosecute religious expression:

“What possible benefit does the majority see in its studious indecision about Smith when the costs are so many? The particular appeal before us arises at the intersection of public accommodations laws and the First Amendment; it involves same-sex couples and the Catholic Church. Perhaps our colleagues believe today’s circuitous path will at least steer the Court around the controversial subject matter and avoid “picking a side.” But refusing to give CSS the benefit of what we know to be the correct interpretation of the Constitution is picking a side. Smith committed a constitutional error. Only we can fix it. Dodging the question today guarantees it will recur tomorrow. These cases will keep coming until the Court musters the fortitude to supply an answer. Respectfully, it should have done so today.”

Yet while the majority opinion largely ignored Smith, it resoundingly rejected the arguments by Philadelphia against CSS. In particular, Roberts dismissed the idea foster agencies are public accommodations, countering that the process of “certification as a foster parent, by contrast, is not readily accessible to the public. It involves a customized and selective assessment that bears little resemblance to staying in a hotel, eating at a restaurant, or riding a bus.” As such, “agencies understandably approach this sensitive process from different angles. As the City itself explains to prospective foster parents, ‘[e]ach agency has slightly different requirements, specialties, and training programs.’”

In essence, Roberts demonstrated from the city’s own wording that foster care is an intensely personal and even moral process that arises from a wide range of motivations. To limit this to rigid cultural dogma strips the moral and religious character that has driven foster and adoptive care for centuries. Roberts then concludes:

CSS seeks only an accommodation that will allow it to continue serving the children of Philadelphia in a manner consistent with its religious beliefs; it does not seek to impose those beliefs on anyone else. The refusal of Philadelphia to contract with CSS for the provision of foster care services unless it agrees to certify same-sex couples as foster parents cannot survive strict scrutiny, and violates the First Amendment.

HOW DO WE RESPOND?

Near the close of his majority opinion, Justice Roberts hits on a critical point that will last long after this case is forgotten. In quoting the SCOTUS opinion in Masterpiece Cakeshop, Roberts observed that the competing interests of religious liberty and the LGBT community are “weighty.” While this case focused on the rights of Americans for free expression of religion against discrimination, our country continues to struggle through how the belief that this expression is itself discriminatory. As Masterpiece noted, “our society has come to the recognition that gay persons and any couples cannot be treated as social outcasts or as inferior in dignity and worth.”

Fulton may be a landmark ruling on religious liberty, but only time will tell. Forced to chose between mission and truth, SCOTUS has defended the freedom to maintain both. However, the Church must likewise hear a similar word in striving to do better in recognizing the imago Dei in all people, particularly those in the LGBT community. Just as our country is struggling through a time of judicial uncertainty, the Church must also learn how to love where we have had a long history of ignorance and hatred.

The Exchange team also contributed to this article.

The Supreme Court Sets a Good Precedent in Fulton, But Questions Remain

The Supreme Court Sets a Good Precedent in Fulton, ...