The third and final post of Dr. Sawyer's thoughts and concerns on CRT.
Pat Sawyer, Ph.D. 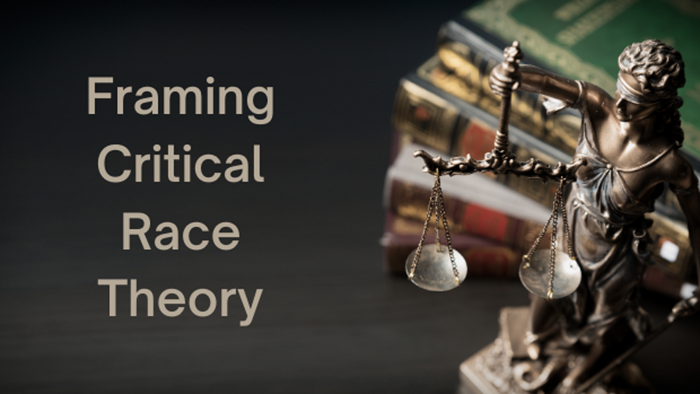 We started with a descriptive framing. From there, the conversation will include others who are more negative, some more positive, and some in the middle. All the articles will come from evangelicals. And, it is important that we hear from people of color, and— in this series and in the real world— not all people of color will agree.

It’s a conversation— mature, Christ-like, and God-honoring. We hope it serves you and your church well.

To start it off, I asked Sitara Roden from my team to give us a framing article. Our first contributor post was from Dr. Pat Sawyer, as he begins a three part article, with references shared in this final article. Read part one here. Read part two here. I will share my thoughts at the end of the series. -Ed Stetzer

In this third and final article in our three-part series on critical race theory, I want to offer three more cautions regarding CRT, a salient concluding point, and a final exhortation.

Caution 6) CRT Tenets 5, 7, 8, 9, 10, and 14 alongside applications of standpoint theory (knowledge is situated; the marginalized see more clearly) can lead one to believe that white pastors need to essentially ‘sit down and shut up’ when it comes to offering and contributing insight regarding racial issues and solutions. It can lead one (falsely) to believe the following category of persons doesn’t exist: non-racist (no apologies to antiracism discourse), white, male pastors who are fully equipped by the Holy Spirit to lead their ethnically diverse congregation on matters of race as well as make meaningful and notable contributions about race to the Church and society. While wisdom will dictate that those who have more direct experience of racism will be sought ought out for their particular insight and understanding, it does not follow that a lack of a certain experience of racism, or worse, a lack of melanin, disqualifies one for speaking into issues of race. It is the quality of the idea versus the quality of the identity of the person offering the idea that should dictate the counsel honored and the course of action taken. Duly called pastors have authority in the churches they oversee, regardless of their ethnicity or the ethnic make-up of their members, and are empowered to speak to any matter the Scriptures speak to (Acts 20:27; 1 Timothy 3:2-5; 2 Timothy 3:16-17). Moreover, the Church is diverse (Revelation 5:9; 7:9) and consequently local churches are expected to reflect the diversity of the communities in which they are planted. The notion that this diversity would legitimately prohibit or disrupt the leadership of the elders on any matter the Scriptures speak to is nonsensical to the Scriptures.

Caution 7) CRT Tenets 2, 3, 5, 6, 7, 9, 13, and 14 can lead one to place too much importance on anecdotal experience in understanding societal reality. This can lead to inordinate suspicion of knowledge claims emanating from sources of different ethnic/racial and social locations. It can cause one to flat out reject empirical data and knowledge claims that have universal scope merely because they are in conflict with one’s personal experience. It is here that the seductive, deleterious drug of “my truth” perceptions can crowd out “the truth” reality. While anecdotal experience is important and can indeed tell us something about our particular lived experience of reality (and even this is not absolute), it is not an automatic or even necessarily safe guide to understanding larger, universal reality. Part of my scholarship addresses, critiques, and repudiates white power and white nationalism. Members in these groups are often convinced that POC are deviant, lesser, and inferior to Whites because of the personal, anecdotal experience they have had with a few POC. They have extrapolated a handful of personal experiences to universal claims, beliefs, and conclusions. Such reasoning is specious. To be sure at times our personal experience does line up with universal reality, of course, but we must be careful to supplement our understanding with broader research and analysis and Scripture before we can come to universal claims and conclusions.

Caution 8) CRT tenets 4, 5, 7, 9, 12, 14, and 15 can lead one to apply their identity and social positioning to their interpretation and understanding of the Scriptures. This possible influence of CRT is particularly pernicious as it can lead to both subtle and overt forms of eisegesis and consequently open the door to a plethora of heretical positions. CRT’s heavy emphasis on black identity, the power of black voice, lived experience in the formation of knowledge, the ubiquity of white supremacy, and the need for emancipation can skew one’s approach (whether black, white, or anyone) to the Scriptures. It can lead one to see temporal liberation and the liberation of marginalized groups from oppressive hegemonic forces as a primary substrate undergirding and animating all of Scripture. In this way it acts as a hermeneutical prism bending text after text to a temporal liberatory end. In full form it can act as a twin sister of Black Liberation Theology and its attending heresies.

As Christians we must keep in mind that as receivers of God’s revelation, we have to be careful not to impose our race, ethnicity, gender, class, or social standing on the interpretation (derived meaning) of Scripture. Naturally, those things will be in play for anyone approaching the Scriptures but we must be careful to bracket them and not let them unduly influence how we come to the proper and specific meaning of the text. Every text of Scripture has a specific meaning(s) that is never codependent or determined by our personal attributes or demographic markers and is available to all (across time and cultures) via study (reason) and/or illumination of the Spirit (John 16:13; Acts 17:2-3).

In addition, there is a difference between interpretation and application when it comes to Scripture. We should generally view interpretation and application as somewhat distinctive recognizing at times the meaning of a text is derived by way of its application (see the important work of theologian, John Frame, on this point). While there certainly can be wrong applications of Scripture that are at variance with its meaning and/or the meaning of other texts of Scripture, it is nevertheless true that there can be several accurate applications of texts of Scripture. As such, one’s social demographics and lived experience can become germane in terms of how a certain text may be applied to the life.

Finally, as it pertains to the Scriptures, a thoroughgoing embracement of CRT can begin to erode the belief in both the inerrancy and sufficiency of God’s word. The nature of critical social theory in general and critical race theory specifically is that it wants a higher and higher preeminence in one’s worldview. It wants more and more jurisdiction in the mind. In a sense it wants to colonize one’s thinking. This is partly why CST (and CRT within it) has penetrated other fields of study in the academy as well as various sectors and institutions in broader society. The path of apostasy is paved with the discarded bricks of inerrancy and sufficiency. May we take heed, and may we be determined to take every thought captive and make it obedient to Christ (2 Corinthians 10:5).

While much more could be said about cautions regarding CRT, I must bring this to a close. I want to conclude by making a final point about CRT. Part of CRT’s allure, seduction even, is that it listens to Black people and all people of color and takes into full account their racial pain. My dear friend, William “Duce” Branch (aka the The Ambassador) is quick to make this point. He’s also keen to emphasize the Church’s responsibility in this. Among other things, this is an indictment of the Church, specifically White spaces in the Church. Racism is an abomination to God. It should not even be named among God’s people. Yet much of the professing White church, throughout its history in the U.S., has been marked by either active engagement in racism, looking the other way, or acting as if it is no longer a concern. Moreover, as historian and theologian, Esau McCaulley, points out regarding historical Evangelicalism, “apexes of theological faithfulness coincided with nadirs of Black freedom” (Reading While Black, p. 11). Let that sink in.

To be sure this means that impenitent, tyrannical enslavers (1 Timothy 1:10) who named the name of Christ had a form of godliness but without its power (2 Timothy 3:5). For more than a few the “lawlessness” that Christ refers to in Matthew 7:23 is racism. I have little doubt that the brutal slaveholder, as well as the fervent Jim Crow champion, who professed to know Christ, was damningly self-deceived and is suffering under God’s wrath at this present moment. I personally can’t make a biblical case for their salvation. The book of 1John alone and its sobering analysis regarding love and hate towards fellow brothers and sisters and what that means concerning salvation is a hurdle too high, not to mention numerous other texts and passages.

Nevertheless, this also means that those of us who are actual Christians, who are White, need to take stock. We should take no comfort or any praise for never owning slaves or not approving of Jim Crow laws. Such protests are often (not always) cover for being content with more subtle forms of racism. Inasmuch as we are personally guilty in failing to love our fellow human beings of color and our fellow Christians of color as providence would dictate when it comes to listening and responding to their racial pain, fighting against racism (within and without), and seeking to correct the injustices against them, we need to repent. While a robust embracement of CRT is incompatible with biblical Christianity and will ultimately exacerbate racial division, and while it is a genuine threat to the Church and certainly not a red herring or mere distraction, we must acknowledge that it addresses a real and present concern in racism – a horrendous evil – that must be challenged and rebuked on every front. May we as God’s people from every tribe, tongue, people, and nation (Revelation 5:9) love each other deeply (1 John 4:7-12), relish and promote our oneness (John 17:21), and bring our future (Revelation 7:9-10) into the NOW.

12) Ladson-Billings, G. (1998). Just What is Critical Race Theory and What’s It Doing in a Nice Field Like Education? International Journal of Qualitative Studies in Education, 11(1), 7-24