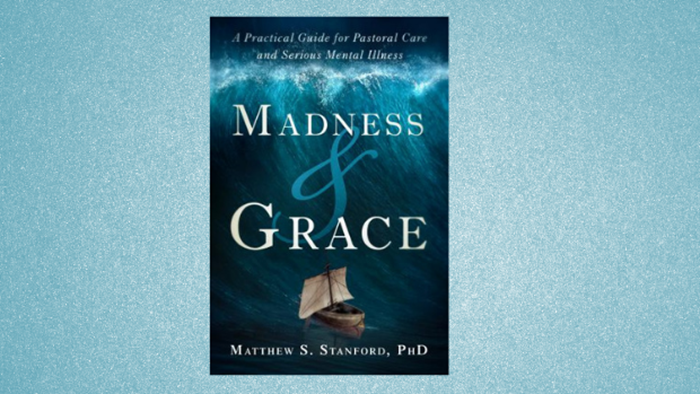 Today I want to feature another installment of my ongoing 20 Truths series. This installment features Matthew S. Stanford’s most recent release Madness & Grace: A Practical Guide for Pastoral Care and Serious Mental Illness, Templeton Press. Stanford is a Ph.D., and the CEO of the Hope and Healing Center & Institute (HHCI) in Houston, Texas, and adjunct professor of psychiatry at Baylor College of Medicine and Houston Methodist Hospital Institute for Academic Medicine. Dr. Stanford's research on the interplay between psychology and issues of faith has been featured in the New York Times, USA Today, Christianity Today, and U.S. News & World Report

(1) Madness, or what today we call serious mental illness, has been part of the human experience throughout recorded history. (p. 1)

(2) In the United States, one out of every five adults (48 million) will experience mental illness in a given year. Perhaps a more disturbing statistic is that almost 60% of adults diagnosed with a mental illness receive no treatment. (p. 3)

(3) There are simply not enough mental health-care providers to meet the growing demand for care. . . . As a result of this lack, there are ten times more individuals with mental illness in our jails and prisons in psychiatric hospitals. Our emergency rooms have become de facto psychiatric crisis clinics. (p. 9)

(4) Research over the last seven decades has consistently demonstrated the individuals in psychological distress are more likely to seek assistance from a member of the clergy before looking for help from a PCP or psychiatrist. This is especially true in minority groups. Viewed through the eyes of faith, it is obvious that this is not an accident but rather a divine opportunity for the church to take the lead in caring for those affected by mental illness. (p. 10)

(5) The primary purpose of this book is to equip pastors, ministry staff, and lay ministers to better serve and support those suffering with mental illness who want assistance from the church. (p. 11)

(6) The scriptures teach us that we live in a fallen world. The presence of illness is simply one example of the creation's brokenness. Mental illness, like all illness, is not the result of personal sin or a weak faith; rather, it is evidence that we desperately need the Savior who can heal our brokenness and make us whole. (p. 21)

(7) Research shows that recovery in remission is possible for those with mental illness. . . . As a faithful leader, your job is not to "fix" those struggling with mental illness but simply to relieve their psychological suffering when possible while revealing the unconditional love and limitless grace that is available only through a personal relationship with Jesus Christ. (p. 30)

(8) In a recent LifeWay Research survey focusing on suicide in the church, almost a third (27 percent) of Protestant pastors reported a suicide connected with their church in the last year. (p. 75)

(10) Research finds that talking openly about suicide actually reduces suicidal thoughts and leads to an overall improvement in the mental health of those seeking treatment. (p. 78)

(11) The most important spiritual principle that you can encourage for those struggling with suicidal thoughts and behavior is hope. Hopelessness is intimately associated with suicidality. (p. 86)

(12) As a pastoral counselor, you have the opportunity to help the counselee build a strong spiritual foundation for recovery. This is best done by focusing on what God has done for us rather than what we must do for him. Three therapeutically beneficial areas of pastoral care for those living with serious mental illness are hope, identity, and purpose. (p. 125)

(13) An estimated 8.4 million people in the United States provide some level of care for an adult living with a mental disorder. In addition, the vast majority of psychiatric inpatient are discharged to a family residence. (p. 135)

(14) The role of caregiver is physically, mentally, and spiritually overwhelming for everyone. A caregiver is not weak if he feels burdened or wants to take a break; that is normal and expected. The caregiver's life did not stop when his loved one was diagnosed with a mental illness. (p. 145)

(15) While a majority of those living with serial mental illness and their family members believe that churches should talk more openly about mental illness, more than 60 percent of Protestant pastors report rarely or never speaking about the topic in sermons or large group meetings. (pp. 147-148)

(16) Mental Health ministry can open doors for the gospel that more traditional ministry approaches cannot. As such, in churches that offer ministries for prison inmates, veterans, or those suffering from addiction, homelessness, domestic violence, or natural disasters, the greater focus on mental health increases opportunities for sharing Jesus with those in distress. (p. 162)

(17) The United States has the largest prison population in the world, exceeding both China and Russia. . . . Sadly, mental illness is far more prevalent among the incarcerated than among the general population. (p. 166)

(18) The Bureau of Justice Statistics estimates that 56 percent of state prisoners, 45 percent of federal prisoners, and 64 percent of jail inmates suffer with a mental health problem. (p. 166)

(19) Please know that a smile, an encouraging word, and a listening ear are powerful tools in helping those suffering with mental illness take the first step toward healing and recovery. (p. 170)

(20) God is sending those broken by mental illness to the church. Imagine what could happen if churches were equipped to serve as the front door to the mental healthcare system. (p. 184)

Join the conversation on Facebook
Tags:
Mental Illness
Posted:
May 29, 2021