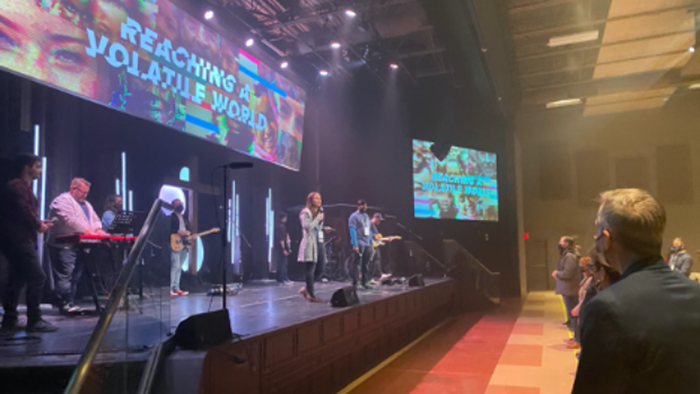 I’m restarting my Sunday Journeys series, talking about different churches I’ve visited and taking away some learnings from each.

Earlier this year, I was at Bay Area Community Church in Annapolis for their missions conference. Despite the numerous health and logistical complications COVID presented through the planning process, the pastors, staff, and congregants at BACC creatively navigated these unique circumstances with precaution and wisdom at the forefront of their concerns.

Here’s a pic of the team praying before one of the services. 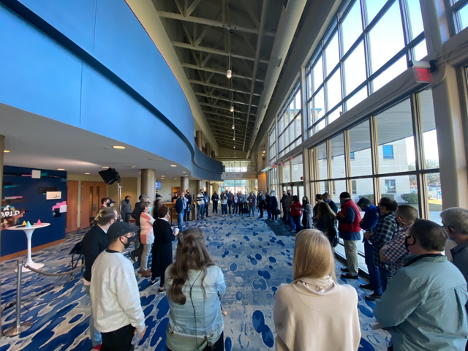 I was thankful for the opportunity to join such an incredible team and visit with Greg St. Cyr, the lead pastor of BACC and my former doctoral student at TEDS.

The theme of the conference was “Reaching a Volatile World,” which—well—is pretty much right on time and on target. 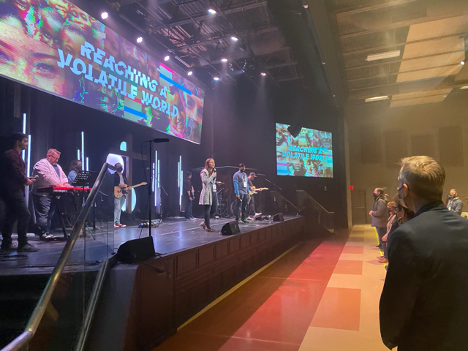 I appreciated the time they set aside for a mission’s focus, including the weekend services, but also all weekend long—and ongoing events behind that. We heard from church planting leaders from India and beyond. 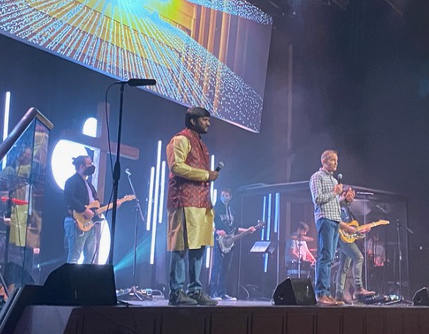 Bay Area Community Church has been mission-oriented since its start in 1987. This church is enraptured with the good news of the gospel and is eager to share it with others, whether down the street or across the world. Greg St. Cyr’s passion for spreading the gospel of Jesus Christ stems from his own missional experiences working with CRU and also as a missionary in Poland for 8 years, mostly during the communist regime and this has undoubtedly only added fuel to the church’s fire for missions.

Bay Area Community Church follows the pattern demonstrated by the apostles in Acts for their own missional scope. Just as the apostles and early Christian church spread the gospel throughout Jerusalem, then Judea and Samaria, and then to the ends of the earth, BACC equips and trains their members to do the same. They begin the work in their own city of Annapolis—their Jerusalem—by emphasizing the importance of personal evangelism to the people encountered in everyday life. BACC also invests in and ministers to communities within Annapolis that are impoverished, homeless, and needy. The church estimates roughly 80% of Annapolis are not followers of Jesus, so the city is ripe for gospel ministry and the church is fervently addressing this need.

Seeing the Mid-Atlantic region and the United States as their own Judea and Samaria, BACC is eager to witness the gospel advance outside of their own church and city into their larger region, and ultimately across our nation. In 2008, BACC created their first church planting team. This sparked a love for planting churches and eventually led to the creation of their church planting organization, the SENT Network, which has planted over 20 churches throughout the Mid-Atlantic region since 2012.

Through all this focus on local and regional missions, BACC does not neglect global mission opportunities. The church partners with missionaries working on the field in 10 countries on 4 continents to launch about 20 short-term mission trips each year. Along with financial contributions to global mission efforts, BACC also hosts a prayer ministry to pray specifically for the gospel to advance without hindrance throughout the world and for missionaries serving on the field.

Through everything they do, BACC strives to serve the church, missionaries, and community like Jesus did—to serve others, ultimately surrendering his life to save them (Mark 10:45). They help their members find ways to serve missionally according to the gifts given to them by the Holy Spirit for the building and nourishment of the body of Christ, whether in Annapolis, across the US, or around the world. For example, the missions conference I attended was spearheaded by Phillip Helms, a business leader and an Executive Market Director for Chubb International, who volunteers at BACC and saw a need in his community and was equipped to meet it. I interview Greg and Philip on my radio show here.

My time there was a reminder that churches can take up the mission—that pastors and volunteers can and should work together to engage global missions.

Join the conversation on Facebook
Tags:
California | Church
Posted:
May 16, 2021