The rising prominence of this position paralleling the rise of the large church.
Ed Stetzer 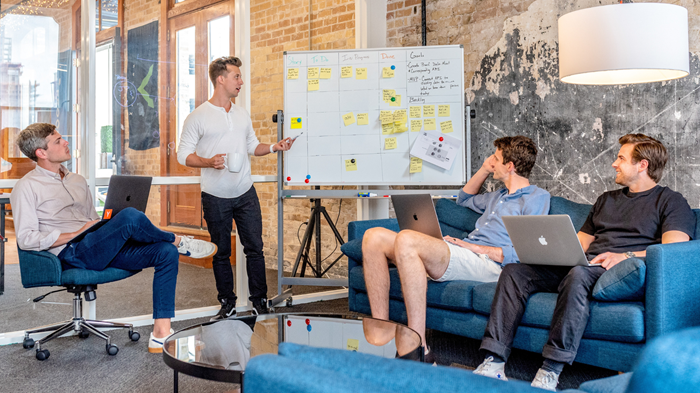 For centuries the pastor was the leader of all aspects of the congregation; teaching, leading, visitation, missions, etc. Small church sizes made this possible but with the rise of the large and (eventually) mega-churches this model breaks down. In this article, we will look at the relatively recent role of the executive pastor.

Jerry Johnson claims the origin of the title "executive pastor" dates to the year 1977 and pastor Ray Ortlund of the Lake Avenue Congregational Church. Johnson had previously served in that type of role at Rolling Hills Covenant Church, though his official title was a student pastor. While at Lake Avenue, Ortlund changed Johnson's title to the executive pastor as he recognized that title fit what Johnson did.[1]

According to John Hawco, the first text to use the title executive pastor was a book on church staff/administration by Kenneth Kilinski and Jerry Wofford in 1973.[2] Hawco wrote, "Their work may have been one of the earliest to use the title 'executive pastor' in any church staff/administrative text. In charting staff acquisitions, they suggest adding a full-time associate (usually a pastoral generalist) in a congregation of approximately 900 parishioners."[3]

It's clear that between the 1970s and 2000 the position of executive pastor rose to prominence, paralleling the rise of the megachurch. The timing and rate of this diffusion of the executive pastor role was confirmed in our recent Wheaton College Billy Graham Center survey, revealing that nearly three-quarters (75%) of American Protestant churches of 750 members or more had an EP. Of these churches, 80% created the position in 1992 or later, with the largest (38%) coming from 1992 to 2006.

Pastors on the executive pastor role: 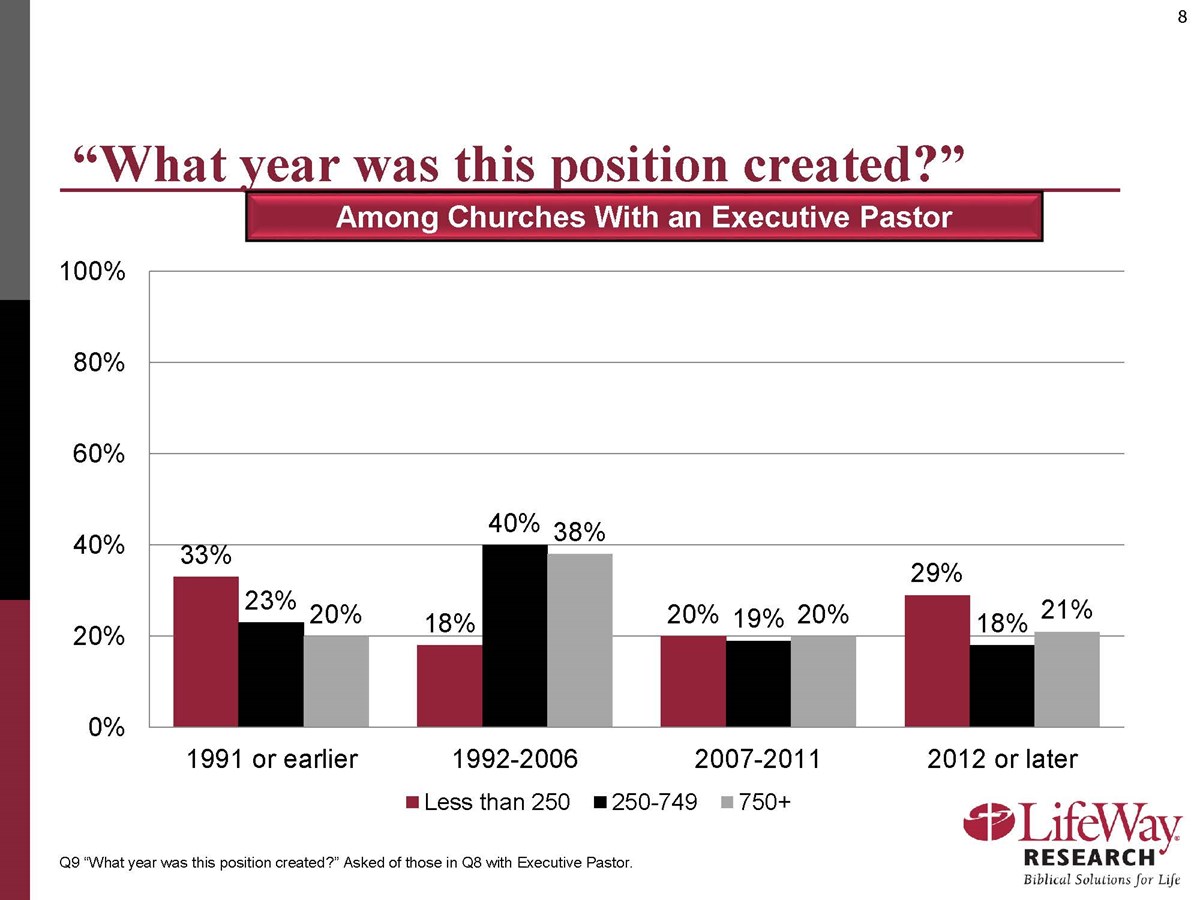 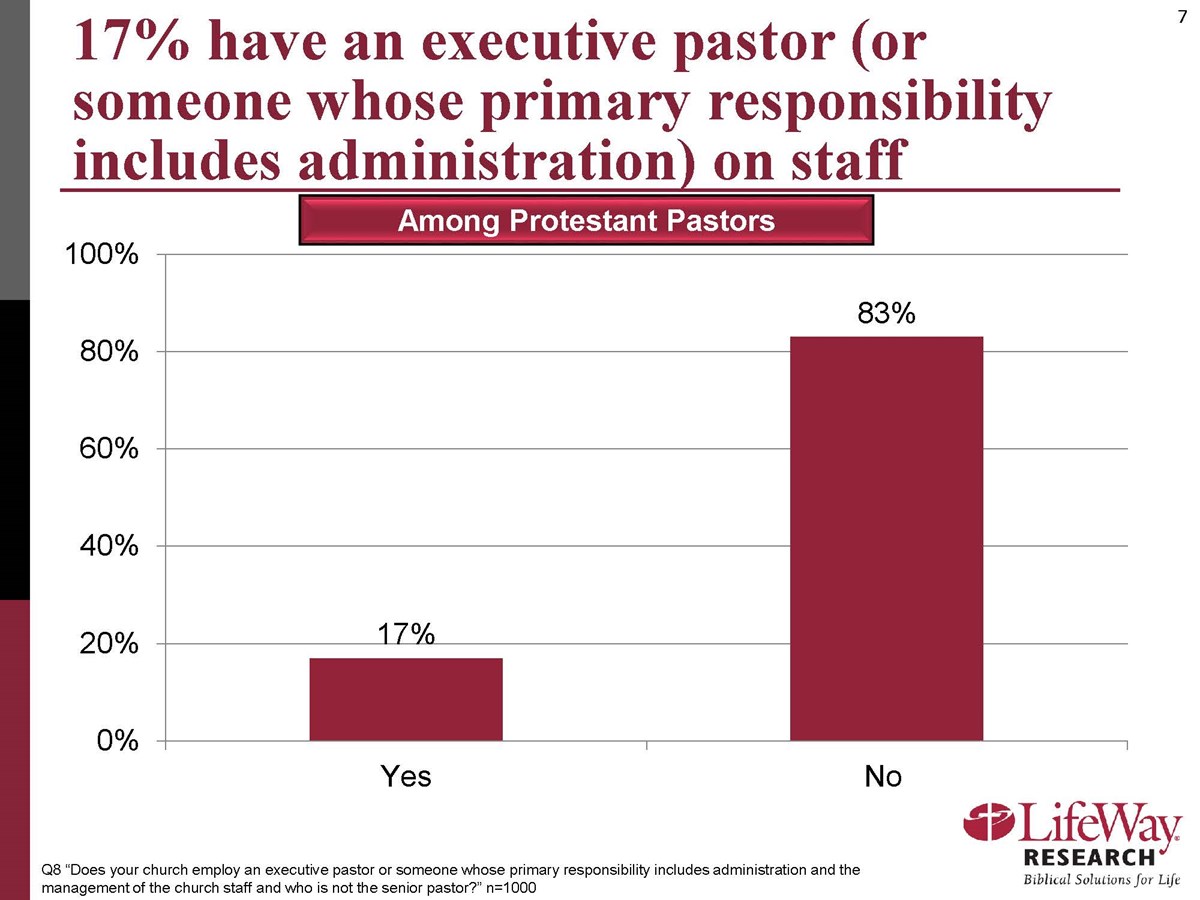 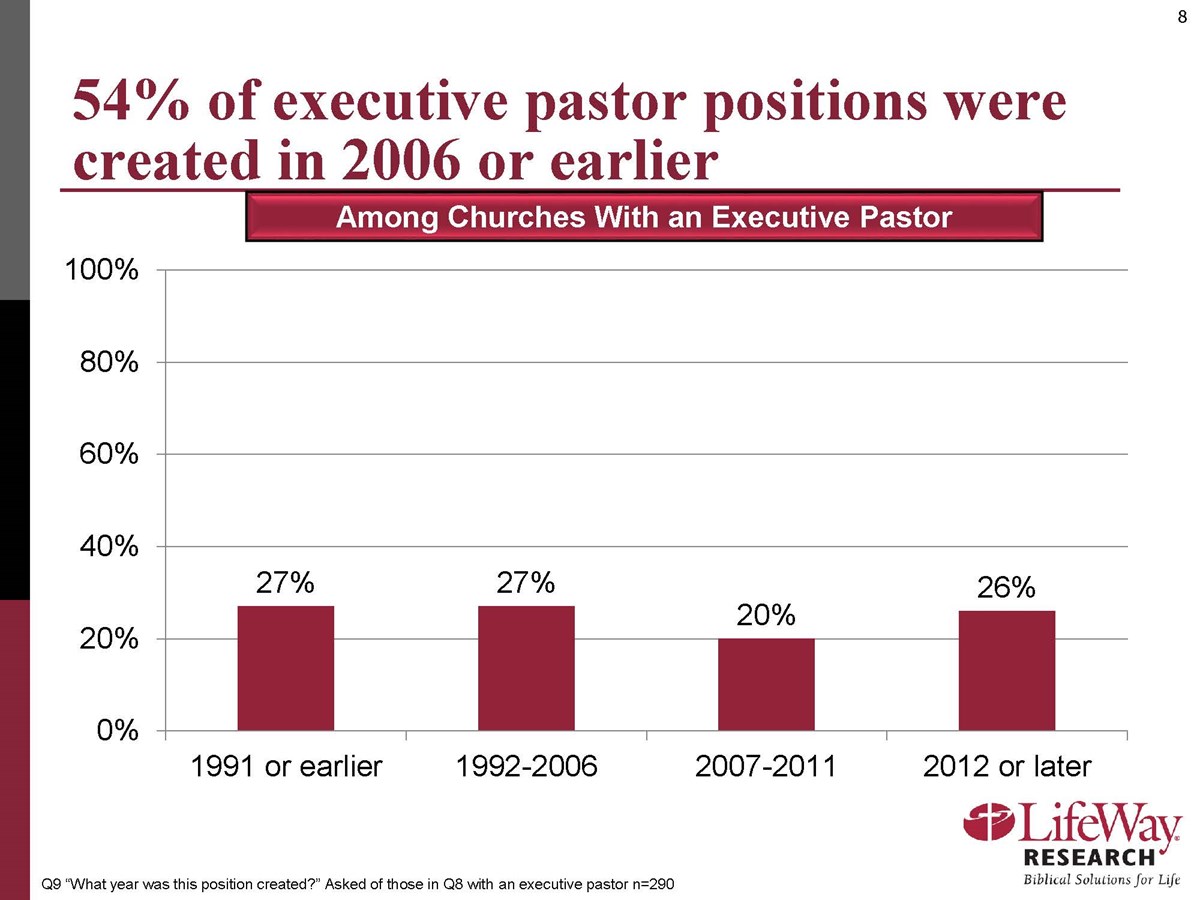 The executive pastor did tasks formally done by the senior pastor but in a larger setting, those tasks of administration and oversight often took most of the pastor's time, while the vast majority are wired toward preaching, vision, and shepherding. The growing complexity of life in the church and the culture at large has necessitated this partnership between the lead/senior pastor and an additional executive to manage the demands of leading a church.

In May, I had a conversation on Facebook Live with four people who are very familiar with the role of the executive pastor. We will share more on this later, but the participants were:

In that discussion, we heard that one key portion of the executive pastor's role was the relationship between the lead pastor and the executive pastor. As partners in ministry, the XP is responsible for implementing and executing the vision cast by the lead pastor. Sometimes this means leading change in the culture within the staff of the church. Sometimes this means managing budget considerations and leading staff through realignment of priorities. Sometimes it means saying “no” or “not now.”

The role of an executive pastor requires an ability to collaborate on the vision set by the lead pastor and the ability to implement that vision effectively. Leading change, encouraging staff to find ways to implement the vision in each of their areas of ministry. It also means disciplining those staff members, leading spiritually while getting the day-to-day work done in the “business” of the church. An XP needs to be growing in their own abilities to manage change, lead and grow deeper in their relationship with God.

The role of the executive pastor is unique, exciting, and demanding. We are doing more research on this role, and hosting more conversations in the coming days.

At Wheaton College Graduate School, we recognize the need for comradery and support, as well as a theological education for people who are called to be Executive Pastors. This summer we are launching a cohort specifically for Executive Pastors. The MA in Ministry Leadership focuses on theology and Bible, leadership, and mission. If you are an executive pastor coming to the position from a business background, or a church background, this degree will give you the additional tools you want and need to lead well.