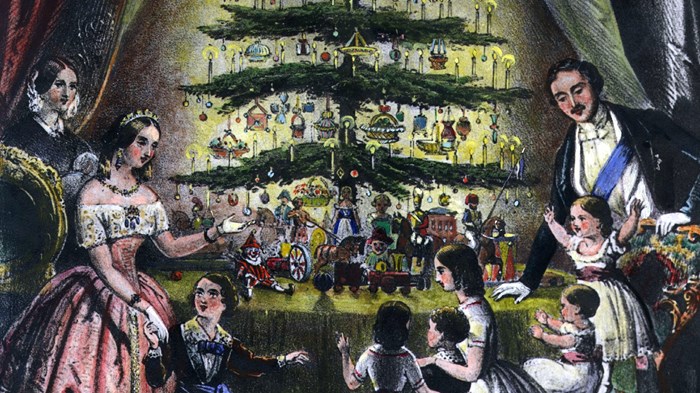 The evergreen tree was an ancient symbol of life in the midst of winter. Romans decorated their houses with evergreen branches during the New Year, and ancient inhabitants of northern Europe cut evergreen trees and planted them in boxes inside their houses in wintertime. Many early Christians were hostile to such practices. The second-century theologian Tertullian condemned those Christians who celebrated the winter festivals, or decorated their houses with laurel boughs in honor of the emperor:

"Let them over whom the fires of hell are imminent, affix to their posts, laurels doomed presently to burn: to them the testimonies of darkness and the omens of their penalties are suitable. You are a light of the world, and a tree ever green. If you have renounced temples, make not your own gate a temple."

But by the early Middle Ages, the legend had grown that when Christ was born in the dead of winter, every tree throughout the world miraculously shook off its ice and snow and produced new shoots of green. At the same time, Christian missionaries preaching to Germanic and Slavic peoples were taking a more lenient approach to cultural practices—such as evergreen trees. These missionaries believed that the Incarnation proclaimed Christ's lordship over those natural symbols that had previously been used for the worship of pagan gods. Not only individual human beings, but cultures, symbols, and traditions could be converted.

Of course, this did not mean that the worship of pagan gods themselves was tolerated. According to one legend, the eighth-century missionary Boniface, after cutting down an oak tree sacred to the pagan god Thor (and used for human sacrifice), pointed to a nearby fir tree instead as a symbol of the love and mercy of God.

Not until the Renaissance are there clear records of trees being used as a symbol of Christmas—beginning in Latvia in 1510 and Strasbourg in 1521. Legend credits the Protestant reformer Martin Luther with inventing the Christmas tree, but the story has little historical basis.

The most likely theory is that Christmas trees started with medieval plays. Dramas depicting biblical themes began as part of the church's worship, but by the late Middle Ages, they had become rowdy, imaginative performances dominated by laypeople and taking place in the open air. The plays celebrating the Nativity were linked to the story of creation—in part because Christmas Eve was also considered the feast day of Adam and Eve. Thus, as part of the play for that day, the Garden of Eden was symbolized by a "paradise tree" hung with fruit.

These plays were banned in many places in the 16th century, and people perhaps began to set up "paradise trees" in their homes to compensate for the public celebration they could no longer enjoy. The earliest Christmas trees (or evergreen branches) used in homes were referred to as "paradises." They were often hung with round pastry wafers symbolizing the Eucharist, which developed into the cookie ornaments decorating German Christmas trees today.

The custom gained popularity throughout the 17th and 18th centuries, against the protests of some clergy. Lutheran minister Johann von Dannhauer, for instance, complained (like Tertullian) that the symbol distracted people from the true evergreen tree, Jesus Christ. But this did not stop many churches from setting up Christmas trees inside the sanctuary. Alongside the tree often stood wooden "pyramids"—stacks of shelves bearing candles, sometimes one for each family member. Eventually these pyramids of candles were placed on the tree, the ancestors of our modern Christmas tree lights and ornaments.

It also took a long time for trees to become associated with presents. Though legend connects the idea of Christmas gifts with the gifts the Magi brought Jesus, the real story is more complicated. Like trees, gifts were first a Roman practice—traded during the winter solstice. As Epiphany, and later Christmas, replaced the winter solstice as a time of celebration for Christians, the gift-giving tradition continued for a while. By late antiquity it had died out, although gifts were still exchanged at New Year's.

Gifts were also associated with St. Nicholas, bishop of Myra (in modern-day Turkey), who became famous for giving gifts to poor children. His feast day (December 6) thus became another occasion for gift exchanges. During the early Middle Ages, Christmas gifts most often took the form of tributes paid to monarchs—although a few rulers used the holiday season as an opportunity to give to the poor or to the church instead (most notably Duke Wenceslas of Bohemia, whose story inspired the popular carol, and William the Conqueror, who chose Christmas 1067 to make a large donation to the pope).

Like trees, gifts came "inside" the family around the time of Luther, as the custom of giving gifts to friends and family members developed in Germany, the Netherlands, and Scandinavia. Often these were given anonymously, or hidden. One Danish custom was to rewrap a gift many times with different names on each wrapper, so that the intended recipient was only discovered when all the layers were opened.

In the English-speaking world, the union of gifts, trees, and Christmas was due to the influence of Queen Victoria and her husband Prince Albert, a native of Saxony (now part of Germany). German immigrants had brought the custom of Christmas trees with them in the early 1800s, but it spread widely after Victoria and Albert set up an elaborate tree for their children at Windsor Castle in 1841. At this point, Christmas presents were usually hung on the tree itself.

German and Dutch immigrants also brought their traditions of trees and presents to the New World in the early 1800s. The image of happy middle-class families exchanging gifts around a tree became a powerful one for American authors and civic leaders who wished to replace older, rowdier, and more alcohol-fueled Christmas traditions—such as wassailing—with a more family-friendly holiday. This family-centered image was widely popularized by Clement Moore's 1822 poem, known today as "'Twas the Night Before Christmas" (which also helped give us our modern picture of Santa Claus).

As many of us make trees and gifts the center of our own Christmas practice, we would do well to remember that they are ultimately symbols of the One who gave himself to unite heaven and earth, and who brings all barren things to flower. 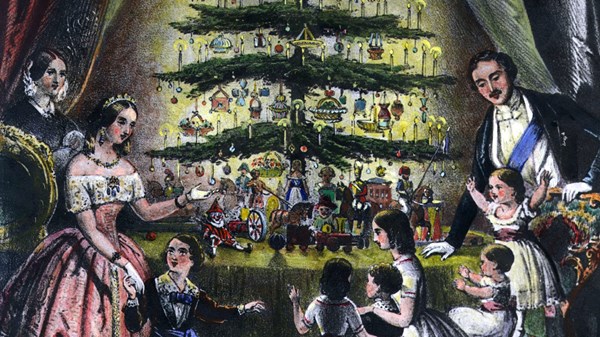