Claim “has shaken the bedrock of biblical scholarship.”
Ted Olsen 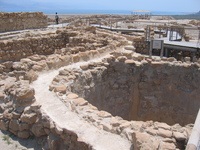 Rachel Elior, who nearly destroyed the academic universe as we know it last week when she argued that the ascetic and celibate Jewish community known as the Essenes were a myth fabricated by the first-century historian Josephus, is herself a myth fabricated by journalists desperate for an Eastertime biblical scandal, according to prominent expert Alan Smithee.

The news media and academic world were shaken to their respective cores this week amid reports that a scholar named Rachel Elior, supposedly an professor of Jewish Philosophy and Jewish Mystical Thought at the Hebrew University, attributed authorship of the Dead Sea Scrolls to the Saducees, or Zadokite priests. A key point of the argument was that the Scrolls themselves do not refer to "Essenes." Likewise, the reported scholar allegedly told media outlets that Essenes are not mentioned in Jewish texts of the time.

"That was the dead giveaway," said Smithee, who has set the cat among the academic pigeons once again with his shocking and astounding theory that Elior does not exist. "Because if you look closely at the work of this supposed ?Rachel Elior,' you note that the words ?Rachel Elior' never appear. Likewise, while there are several books that some publishers have credited this Elior with writing, she does not really appear in the scholarly texts written at the time. Historians do not describe meeting her, her personal habits, her preferences, her food preferences, or the like. If she was as prominent as Time, the Associated Press, and other media outlets would have us believe, you would expect to see her name everywhere in the extant texts. We simply don't have that, and there is no evidence to support her existence."

Likewise, Smithee pointed out, the Dead Sea Scrolls talk about resurrection, something that the Sadducees did not believe in.

Smithee's theory has landed like a bombshell in the cloistered world of biblical scholarship. But some traditionalists say it's possible that the Essenes existed AND that Elior does as well. "You remember when James Charlesworth, director of the Dead Sea Scrolls project at Princeton Theological Seminary pointed out to Time magazine that ?Essenes' was a foreign label that the Essenes wouldn't have used for themselves, and that they preferred identifies like ?men of holiness' or ?sons of light'? Well, kind of like that, it's relatively standard practice for a scholar not to refer to themselves very much in their work," said one expert who did not wish to be named, perhaps because the debate is just so incredibly explosive. But the scholar contends that the trend has been changing lately, pointing the work of Simcha Jacobovici, who made headlines in 2007 by announcing the discovery of the tomb of Jesus of Nazareth, Mary Magdalene, their son Judah, and other family members.

"We have far more evidence for the Essenes than we do for Elior," Smithee said, noting that Philo and Pliny describe the Essenes as well as Josephus. "We have only two sources for Elior: A webpage at the Hebrew University of Jerusalem (which can be faked) and a Wikipedia page. And because Wikipedia has been shown to be so unreliable, full of error, and subject to various biases and agendas, it really almost proves that Elior is a fabrication. In fact, the updates on Elior's page have come from outside Israel, so they really can't be trusted to know what they're talking about."

Not surprisingly, Smithee's speculative theory, and his dismissal of the existence of a reported colleague, has raised the hackles of other scholars. The world of Dead Sea scholarship is insular and notoriously catty, and debate has sometimes strayed from purely academic turf.

"Oh, and that can't be faked," Smithee responded. Smithee's work will likely further inflame the argument over the controversial Dead Sea Scrolls. He vehemently denies he is trying to add fuel to the fire and claims his theory is based on nothing more than common sense.

Smithee says he has a list of other biblical scholars who probably do not exist and is shopping a book proposal on his earth-shattering research for publication at next year' Easter media speculation rush.