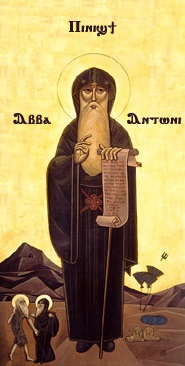 The headscratching headlines about the restoration of the world's oldest monastery.
Ted Olsen

"Egypt: Ancient Monastery Called a Sign of Coexistence" read the New York Times headline on an Associated Press story. The Daily Star of Lebanon, on its headline for the same story was even more direct: "Ascetic saint becomes a symbol of tolerance."

To be clear, it's the renovation, unveiled last week, of Antony's 1700-year-old monastery that's the symbol of tolerance, not Antony himself.

"I believe today is important because it can answer all the questions of the people all over the world and it can show how the Muslims can stay here eight years restoring and making impressive work," Zahi Hawass told the Associated Press and other journalists.

As for Antony, he wasn't quite the symbol of interfaith tolerance. Here's the opening of Mark Galli's profile in Christian History's issue 64, on Antony and the other desert fathers:

Crossing the dry Egyptian desert, a band of philosophers finally arrived at the "inner mountain," the monastic abode of a Christian named Antony. The skeptical scholars asked the illiterate old man to explain the inconsistencies of Christianity, and after they got started, they ridiculed some of its teachings—especially that God's Son would die on a cross.Antony, who spoke only Coptic (not Greek, the international language of the day), answered through an interpreter. He began by asking, "Which is better—to confess a cross, or to attribute acts of adultery and pederasty to those whom you call gods?" After questioning further the reasonableness of paganism, he moved to the central issue."And you, by your syllogisms and sophisms," he continued, "do not convert people from Christianity to Hellenism, but we, by teaching faith in Christ, strip you of superstition. … By your beautiful language, you do not impede ...