A Model of Fidelity and Love

“If the church is to prosper and mature, she will need faithful men to lead and care for her. The church will need men who are sound in doctrine, whose lives are guided by the Word of God, and who are willing to defend the truth. The church will need to hold up as its ideal those who model fidelity and love toward God, men who will pour themselves out for the benefit of the Lord’s sheep. Men of this mold are gifts to the church from her Lord. In the late 1700s the Lord did indeed give such a gift to the church”
—Lemuel Haynes.

Lemuel Haynes was born on July 18, 1753 in West Hartford, Connecticut. Early biographers speculated that Haynes’s mother was either a daughter of the prominent Goodwin family of Hartford or a servant named Alice Fitch who worked for one John Haynes. However, speculations about his parentage proved profitless. Abandoned by his parents at five months of age, Haynes was raised as an indentured servant by the Rose family in Middle Granville, Massachusetts. The Roses treated Lemuel as one of the family’s own children, giving him the same pious instruction in Christianity and family worship that Deacon Rose gave all his children.Timothy Mather Cooley, Sketches of the Life and Character of the Rev. Lemuel Haynes, A.M., for Many Years Pastor of a Church in Rutland, Vt., and Later in Granville, New York (1837; reprint, New York: Negro Universities Press, 1969).

Following his indenture, Haynes volunteered in 1774 as a Minuteman and in October 1776 joined the Continental Army, thus becoming part of the American Revolution. Haynes volunteered just as the Continental Navy and Army suffered heavy casualties at the Battle of Valcour Bay on October 11, 1776 and General Washington’s forces met defeat at the Battle of White Plains on October 28, 1776. In November 1776 Continental forces witnessed over three thousand casualties and the loss of over one hundred cannons and thousands of muskets in defeats at Fort Washington and Fort Lee. Lemuel served in the Continental Army until November 17, 1776, when he contracted typhus and was relieved of duty. Despite the dismal prospects of the Revolution at this point, as a patriot Haynes was determined to defend with life and tongue the newly developing nation and its ideals of liberty. His political values were shaped by his “idealization of George Washington and allegiance to the Federalist Party.”Helen MacLam, “Introduction: Black Puritan on the Northern Frontier,” in Rich­ard Newman, ed., Black Preacher to White America: The Collected Writings of Lemuel Haynes, 1774–1833 (New York: Carlson, 1990), p. Xx.

A Disciple of Edwards, Whitefield, and Doddridge

But it was during his time with the Rose family and after the American Revolution that Haynes demonstrated his interests and talents for theol­ogy and ministry. “Haynes was a determined, self-taught student who pored over Scripture until he could repeat from memory most of the texts dealing with the doctrines of grace.”Ibid. Though Haynes benefited from the devout religious practice and instruction of Deacon Rose, the works of Jonathan Edwards, George Whitefield, and Philip Doddridge influenced him the most. Indeed, Haynes owed much to the revival and evangelism efforts of Whitefield and Edwards, who greatly impacted America, and especially the New England area, during the Great Awakening of the 1740s.

Haynes began his formal ministerial training by studying Greek and Latin with two Connecticut clergymen, Daniel Farrand and William Bradford. He was licensed to preach on November 29, 1780 and five years later became the first African-American ordained by any religious body in America. In 1804 Middlebury College awarded Haynes an hon­orary Master’s degree—another first for an African-American.

Indeed, Calvinism seems to have corroborated the deepest structuring elements of the experiences of such men and women as they matured from children living in slavery or servitude into adults desiring freedom, literacy, and membership in a fair society. From Calvinism, this genera­tion of black authors drew a vision of God at work providentially in the lives of black people, directing their sufferings yet promising the faithful among them a restoration to his favor and his presence. Not until around 1815 would African American authors, such as John Jea, explic­itly declare themselves against Calvinism and for free-will religion.John Saillant, Black Puritan, Black Republican: The Life and Thought of Lemuel Haynes, 1753–1833 (New York: Oxford University Press, 2003), p. 4.

Lemuel Haynes’s pastoral career spanned forty years. He began his life of Christian service as a founding member and supply pastor to the church in Middle Granville, Massachusetts. He served in Middle Granville for five years, then received ordination from the Association of Ministers in Litchfield County, Connecticut. Haynes completed his ordination in 1785 while serving a church in Torrington, Connecticut. However, despite his evident prowess as a preacher, he was never offered the pastorate of that church due to racial prejudice and resentment among some churches in the area. In 1783 Haynes met and married twenty-year-old Elizabeth Babbit, a young white schoolteacher and a member of the Middle Granville congregation. The couple bore ten chil­dren between 1785 and 1805.

On March 28, 1788 Haynes left the Torrington congregation and accepted a call to pastor the west parish of Rutland, Vermont, where he served the all-white congregation for thirty years—a relationship between pastor and congregation rare in Haynes’s time and in ours both for its length and for its racial dynamic. During his stay in Rutland, the church grew in membership from forty-two congregants to about three hundred and fifty as Haynes modeled pastoral devotedness and fidelity to the people in his charge. He also emerged as a defender of Calvinistic orthodoxy, opposing the encroachment of Arminianism, universalism, and other errors.

In March 1818, on the heels of a five-year-long dispute with a deacon and growing alienation between Haynes and members of the congregation, several of whom were facing various church discipline charges, the church voted against continuing its relationship with their pastor of thirty years. In his farewell sermon to the Rutland congregation, “The Sufferings, Support, and Reward of Faithful Ministers, Illustrated,” Lemuel Haynes concluded:

The flower of my life has been devoted to your service:—and while I lament a thousand imperfections which have attended my ministry; yet if I am not deceived, it has been my hearty desire to do something for the salvation of your souls.

Following his tenure in Rutland, Haynes remained active in minis­try, serving despite declining health. He served as pastor in Manchester, Vermont from 1818 until 1822. In 1822 he began an eleven-year preach­ing ministry with a church in Granville, New York. Haynes contracted a gangrenous infection in one of his feet in March 1833. But he continued his duties with the Granville, New York congregation until May of that year, when health limitations overtook him. Lemuel Haynes died on September 28, 1833 at the age of 80.MacLam, “Introduction: Black Puritan on the Northern Frontier,” in Newman, ed., Black Preacher to White America: The Collected Writings of Lemuel Haynes, 1774–1833, p. xxxv.

Centered on the Gospel

As a pastor, Haynes seemed always to be possessed with thoughts of the welfare of his congregation. Their salvation was paramount. His sermons made explicit the centrality of the cross of Christ and were rich in both theological instruction and practical application for his hearers. Lemuel Haynes is a wonderful model of the “old ideas” that stand the test of time and point the way forward even in our day.

In general, an eschatological expecta­tion gripped Haynes’s heart and mind. In each of the selections included here, the anticipation of meeting the Lord Jesus Christ at the Judgment motivated Haynes’s instructions to his hearers. Haynes well understood that the bar of Christ, especially for the minister, would be a time of penetrating judgment, a time at which the heart and habits of the pastor would be laid bare and his just rewards made known.

Consequently, Haynes believed that a minister’s Christian character was essential to his faithfulness and to his effectiveness in the gospel ministry. In a 1792 ordination sermon, “The Character and Work of a Spiritual Watchman Described,” Haynes underscored five key traits a minister needs to possess.

First, they are to “love the cause in which they profess to embark.” That is, they must love Christ Himself and the proclamation of His divine glory to those who would hear and be saved. Second, the minister is to be wise and prudent, understanding the subtlety of the spiritual task and the spiritual enemies against whom he is engaged. Third, patience must accompany every member of the ministry. Fourth, courage and fortitude must fill his heart. And fifth, vigilance, alertness, and close attention to the business of watching for souls must characterize the spiritual watchman, the faithful preacher.

Apart from these qualifications, the Christian minister is completely unprepared to give an account to God for his conduct and his care for God’s people. But those who are prepared would examine their motives for entering the ministry, would be careful to know their duties as pastors, would seek to please none but God, would work to make their preaching plain, sober, modest, and reverent, and would work to know as much as possible about the souls entrusted to their care.

For those in or contemplating entrance into pastoral ministry, Lemuel Haynes reminds us of the solemn importance of faithfulness in the gospel minister. Haynes warns us of a blithe attitude toward our work as minis­ters, ambassadors for Jesus Christ. Indifference is deadly—to our people and to ourselves. Ours is a life dedicated to caring for another’s children with the anticipation of one day returning them to their Heavenly Father.

At that time we shall give an account of our stewardship—what we have taught His children, what model or example we have provided, whether we have tended to the state of their souls, and most importantly, whether we spoke reproachfully or gloriously of their True Father. If we would be faithful, we must keep the coming of our Lord in full view as we discharge all the duties we have been given by Him who walks in the midst of the seven lampstands (Revelation 1:13).

Thabiti M. Anyabwile (MS, North Carolina State University) serves as a pastor at Anacostia River Church in Washington, DC, and is the author of numerous books. He serves as a council member of the Gospel Coalition, is a lead writer for 9Marks Ministries, and regularly blogs at The Front Porch and Pure Church. He and his wife, Kristie, have three children.

This article is adapted from The Faithful Preacher: Recapturing the Vision of Three Pioneering African-American Pastors by Thabiti Anyabwile, and was originally published on Crossway.org. Used by Permission of Crossway. 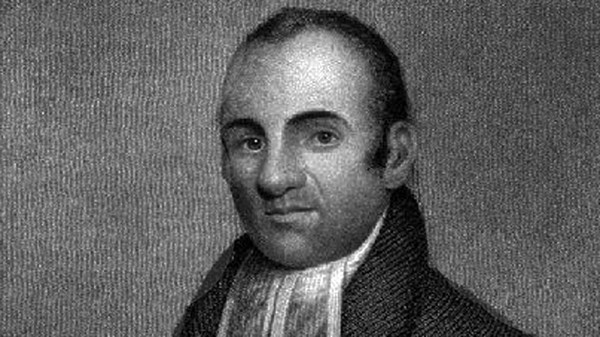