The 500th anniversary year of the birth of Ulrich Zwingli is a good time to take a new look at the Zurich reformer who died with a sword in his hand fighting for freedom to preach biblical faith.

The Swiss historian Wilhelm Oechsli observed that if Zwingli was not the most important character in Swiss history, he was surely the most audacious and most colorful.

Zwingli, bred a mountain man, was an amazing combination of intellect, passion, and wit. He was political to the core. But central to understanding his life and work is the fact that he became a devout student of Scripture. He was transformed and shaped by the Word, yet like all of us, his vision was limited by his own peculiar place and time—the freedom-loving city of Zurich in the early sixteenth century.

From the vantage point of almost a half millennium, the weaknesses and mistakes of Zwingli as a Christian leader are as apparent as his many strengths. But who can say whether the future judgment of history on today’s church and its leaders will make our criticism of Zwingli appear pale in comparison? Who dare say what the judgment of God might be on our own shortness of vision and failures of charity?

This is the fourth issue of this fledgling publication. To this point we have published Christian History on an “occasional” basis. Our prayer and our goal is to publish four issues a year on a regular schedule beginning in 1985. The next issue—due for publication late this year—treats the Anabaptist and Mennonite movements, an appropriate follow-up to our look at Zwingli here. Also in preparation is an issue on C.S. Lewis, the great British writer and scholar.

Back copies are available for you to complete your collection of Christian History. Just use the order form ...

BibleHuldrych ZwingliPoliticsReformation
Issue 4: Zwingli: Father of the Swiss Reformation, 1984
Previous Article
From the Archives: The Shepherd

Next Article
Zwingli and Luther: The Giant vs. Hercules
John B. Payne 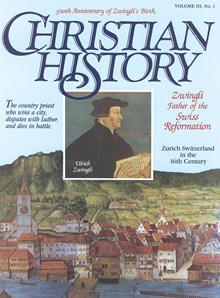